Calm the F Down 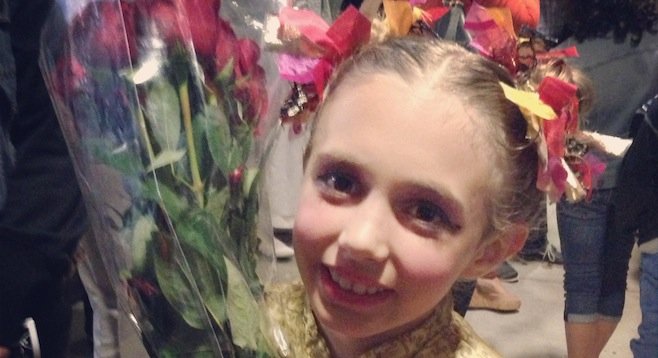 Jane’s Evite said the show began at 6. My father, like me, is loath to feel rushed and is absolutely opposed to any and all kinds of tardiness. When I suggested we ride together, he calculated aloud, “If it starts at 6, we’ll want to be there at least by 5:45, and when you consider that’s right at the peak of rush hour…we should leave by 5.”

That time wouldn’t have been much of a problem, had my video shoot not been running long (I was interviewing an artist who makes her own paint from rocks). My production team was wrapping up when I realized it was already past 4. After making hasty goodbyes, I hustled David to the car. On the drive home, my stomach complained that I hadn’t eaten since breakfast.

David and I had been so busy with work that we hadn’t had time to hit up a grocery store in almost two weeks. It had gotten so bad, we were down to our last roll of toilet paper and the only edible items in our cupboards and fridge were cracker crumbs, mustard, and old cans of stuff like bamboo shoots that probably should have been thrown away. The realization that there was no food at home redlined my stressometer. “I have no time to get ready and eat,” I shrieked as David was texting my father to let him know I was still good to go.

“Once we get home, you just worry about getting ready and I’ll make sure you have something to eat,” David said in his Please calm the F down, the world’s not about to end voice.

While I changed and fixed my hair, David ran out to fetch us both a bite, as he hadn’t eaten either. The next half-hour was everything I never would have planned — my heart pounded with anxiety and frustration; I felt like I hadn’t had a minute to myself all week, and I was feeling rushed and flustered.

I had just finished putting on my boots when David returned from the Regal Beagle with a grilled sausage, which I gobbled at Joey Chestnut speed. My previously empty, shrunken stomach balked at the sudden intrusion, and even before my last bite, I regretted eating so fast. “Ugh,” I said to David. “Now I feel ill. But thank you for running out. I was already starting to get a headache, and I never would have lasted another three hours — I doubt they have real food at a children’s play.”

My only experience with children’s plays had been from the comically cringeworthy scenes in sitcoms and movies. I was only going to this one — a Christian Youth Theater production of Disney’s Mulan — to support my niece Bella, who, as a younger, newer member of the after-school theater-arts training program, had two small roles.

When my dad pulled up, his girlfriend Davee was with him. She, too, had rushed to leave work early and made it, sans food, just in the nick of time. After unloading on Dad and Davee about how gross I felt and how stressed I was, I took a deep breath and said, “I just exhausted myself. I hope they have coffee there.”

We arrived at around 5:40, to an army of moms in red Mulan shirts in the midst of setting up several tables. I spotted a portable coffee maker, but it wasn’t on. I asked a redshirt to point us toward will-call, but she gave us an odd look and said it hadn’t been set up yet. Exasperated, I marveled at how disorganized and last minute San Diego can be. We stood around and waited until, at 5:50, it occurred to me we were the only adults present who were not wearing red shirts.

One of the redshirts confirmed what I feared — the show didn’t begin until 7. My sister must have typed the wrong time. Snippets of the last hour crashed through the dam that had been containing my composure and gushed forth like a torrent through my mind. My mouth became a hotbed of profanities. Even my father, who had once been a sailor, reddened at some of my more creative combinations.

When I’d finished my schizophrenic tirade, I took a breath and said, “You know what? Scratch the coffee. Take me to the nearest bar.”

Fortunately, the nearest bar was just a few blocks away, in a strip mall. I’d heard of Pal Joey’s, but I’d never been inside. I expected a sticky, dive-y hole in the wall, but was pleasantly surprised to find a capacious room with tables and chairs that were clean and comfortable. My frustration dissipated as I turned my attention to all the fun, fancy details, such as the glass chandeliers and the strip of silver glitter that lined the stage in the far corner.

I ordered a Manhattan for the booze. Dad got a Stella, probably because it gave him a reason to imitate Marlon Brando’s Stanley Kowalski in A Streetcar Named Desire. Davee settled on a glass of chardonnay. The respite, though sweet, did not last long. Jane started texting at 6:15 to let us know she had arrived and our tickets were waiting. At 6:30, she reported that she’d gone backstage to help her daughter prepare.

“I guess there’s no time for another one,” I said before noticing I was the only one who’d finished my drink. With a gulp, Dad downed what was left of his, and then we both turned our eyes to Davee’s mostly full glass. While my father and I were busy bargaining over which of us would chug the chardonnay, Davee shocked and amused us by finishing the job herself.

Our edges softened, we returned to the theater. I tried not to flip out when I saw that there was real food available — on one of the many tables the redshirts had set up were steam trays with Chinese fare. I had inhaled an early dinner unnecessarily.

Once the show began, the rest of my tension evaporated. I’d expected a shoddy kids’ play, but this was a serious production with elaborate costumes and professional set design, and the 16-year-old playing Mulan had a polished and powerful singing voice. And when I spotted my niece Bella all made up and working through the choreography, I remembered why I’d gone to all the trouble to get there.