It felt scandalous, my going to an Oscars party when I’d only seen one of the films nominated for Best Picture. It was a fluke I even saw the one — David and I had gotten around to watching Midnight in Paris one otherwise uneventful evening. David likes Woody Allen; save for a select few of his films, I’m mostly meh about the guy’s work. But just because we hadn’t seen 89 percent of the nominated films didn’t mean we’d shy away from ponying up our $5 for the pool. When there’s a contest at stake, David will do whatever he can to win it for me. I collect his wins like a schoolgirl on a first date collects carnival game prizes.

The day before the party, David spent a couple hours researching the nominees and filling in our selections on the ballot we’d printed from the email invite. We were invited to arrive at 4 p.m., in time for the red carpet trash talk.

I knew Beth was a film buff — she’s KPBS’s film critic, and she also runs their Cinema Junkie blog. It should have occurred to me, especially on the evening of Hollywood’s biggest self-congratulatory show, that Beth might surround herself with like-minded film aficionados. When we entered her home and took in the other guests (and their credentials), David and I felt as if we’d shown up for a tennis match without racquets. At the table was Ian, film critic for soberingconclusion.com and chair of the San Diego Film Critics Society. Seated beside him was Miguel, who created this town’s first annual horror-film festival, Horrible Imaginings. Both guys were staring at their laptops, as was Beth, who was seated across from them. “We’re live-blogging the Oscars,” she said. Miguel was posting a podcast to his website, Beth was blasting updates using Tweetdeck, and Ian was toggling between his blog and the spreadsheet he’d created to track everyone’s selections for the pool. On the couch was Phil, managing director of the San Diego Asian Film Foundation. He was busy tweeting on his iPhone.

“Holy shit, these people are serious,” I whispered to David.

“I feel guilty for not knowing anything about any of the movies this year,” I said.

My movie-going neuroses (my preference for a particular seat, my germ aversion, my rigid prescreening pee schedule), combined with my growing irritation with other people’s behaviors (texting, seat-kicking, breathing), keeps me away from cineplexes. I prefer to watch films in the comfort, privacy, and pause-button accessibility of my own home.

“Don’t worry, I’ve got us covered.” David gave me a reassuring smile as we chose our seats at the table. My concerns were further quelled as more guests arrived, without ballots in hand, and simply spoke their selections aloud to Ian as they skimmed through the list of nominations, seemingly for the first time. Good, I wasn’t alone. Whenever someone would make an apparently ludicrous selection, Ian would say, as if encouragingly, “Well played!”

Ian was studying the ballot spreadsheet on his screen. “Well, this has never happened before,” he said with wonder in his voice. He looked up at me. “Halfway through the show, we’ll already know who’s won.” In response to my confused expression, he clarified: “Except for one category, our selections are all exactly the same.”

“What about everyone else?” I asked. Ian shook his head and chuckled.

David asked in which category we differed; it was sound-editing. Ian had put his money on War Horse, we’d chosen Hugo. Ian said that, historically, the academy often favored war films when it came to the category. “Ah, so you strayed from the odds to make a more daring and sophisticated choice,” David said with admiration. If sophistication in film was a prerequisite, I mused, they wouldn’t have let me through the front door.

Beth had prepared an elaborate and tasty Mexican pork-centric meal. I learned she and her friends were also avid bakers (what I’d thought were cases of store-bought cupcakes were actually all homemade). We’d offered to bring wine, but our hostess said there would be more than enough drinks to go around — her friend Lauren was preparing a flight of nine cocktails, each representing one of the nine nominations for best picture.

While Beth, Ian, and Miguel were busy kissing their laptop screens, David mingled with other guests and I went to stand by Lauren as she and her assistant, Nadine, toiled to have the drinks ready by showtime. “Ooh, I like how you’re cutting that apple, it looks like…”

“Ah, cool, I get it,” I said. I vaguely remembered seeing a preview that included tinkering with gears, springs, and valves. Lauren introduced me to a few of her other creations. The “black and white” was for The Artist, the one with a sprig of rosemary and an accompanying dinosaur toy was for The Tree of Life, and the New Yorker was for Extremely Loud & Incredibly Close. “What’s this one?” I pointed at the chocolate concoction with whipped cream.

“Shit pie,” Lauren said. I gave her a horrified look. “For The Help.”

Twenty minutes into the show, it was already shaping up to top the list of the most boring Oscars presentation I’d ever seen. Every time a winner was announced, I looked around until I found David. If he tilted his chin down and raised his brows, I knew we’d chosen the same. I was reassured by how close our picks were to those of the expert in the room. In the end (which was well before the actual end), David’s uninformed choice won out over Ian’s over-informed one.

“I feel so guilty for having won,” I said, as we drove home. “We got great food, amazing cupcakes and cocktails, and a pile of cash. I shouldn’t have won. I’d never even heard of most of those movies or actors.”

“Don’t feel bad,” David said. “I researched this; ours were informed choices. That is, unless you want to turn around and give it all back.” I slapped him in the arm and kept driving. 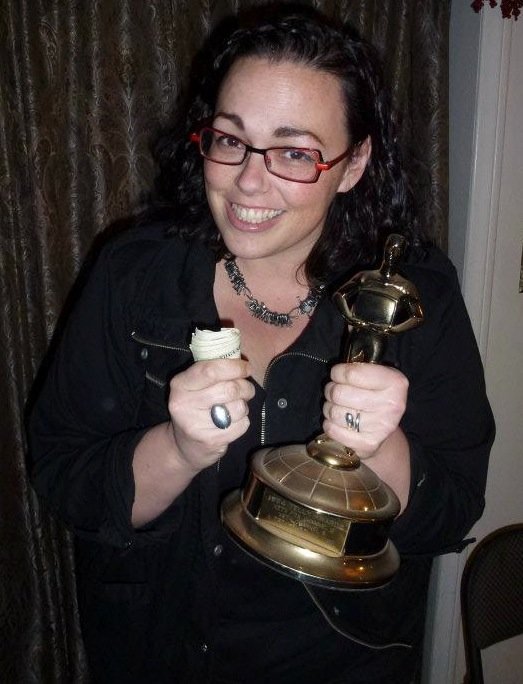