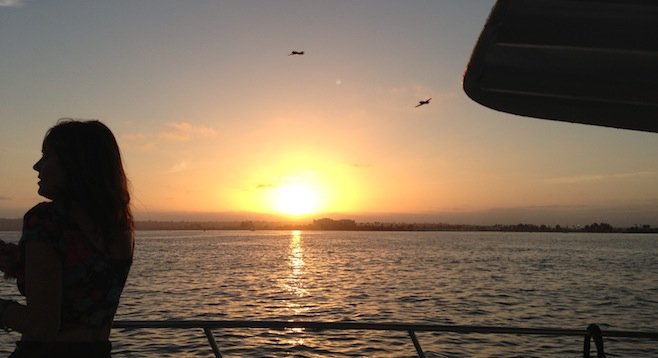 I took this pic myself

“I was wondering how long it would be before someone said that,” David said with a sideways smile.

“Well, the answer is, ‘Before we’re even onboard,’” I said. I couldn’t tell which of the two guys in front of us had called out the phrase, but they both seemed pretty happy about it. The moment I stepped from the dock to the aft of the Fantasea (the yacht my friend Jane chartered to celebrate her birthday), I couldn’t help but pay homage to the Lonely Island tune myself. I hum-muttered the line, “never thought I’d be on a boat,” despite the awareness at how tired the song was after four years.

We collected a cup of sparkling rosé from the deck’s salon and then made our way to the top for the best view as the boat headed into the bay. I lifted my cup at David and took a sip. “This is so much better than renting a camel,” I said as I stared off toward the horizon.

I could tell from David’s facial contortions that he didn’t know what I was talking about. “Jane wanted to rent a camel and let people take rides on it in her backyard,” I explained. “But then she found out camels have some kind of anxiety about steep slopes, and you know she lives on a canyon, so then she thought she’d get a donkey, but that just wouldn’t be the same. When she told me she was also considering a boat party,” I slapped David on the arm. “Of course I pushed for the boat.”

“A camel? Really?” said David. “A boat is way better than a camel. People would have to line up one at a time for a 30-second tour of Jane’s backyard. And all camels really do is poop and spit. They’re the ones that spit at you, right? Or are those llamas…” David sipped his drink as he trailed off in thought.

“Check it out,” Shawn said, gesturing off the starboard side or the port side (I didn’t bring my boating glossary, and the thing was so long I’d forgotten which end was the front). “Wonder what that guy’s compensating for.” We followed our friend’s gaze to see another boat with the word Penetrator scrawled in dark blue cursive on the white stern.

“Look at that one — they must be friends,” David said, pointing out a small ship just a few slots over, on which the word Dominator was painted. After that, the monikers seemed to get a little more feminine. Lady Godiva III made me wonder what might have happened to I and II. I snapped a shot of Bella for my niece of the same name and then rolled my eyes at Grand Delusion, mostly because I had to say it aloud before I got the pun.

“Boat names are so cheesy,” I said.

“Yeah? What would you name yours? You know,” David caught himself, “if you had one.”

“When I have one,” I jokingly corrected him. Joking, because we both knew that if I had enough money to buy and maintain a boat, I’d probably spend it on an exotic pet. Like a cheetah or a fuzzy wombat. No, wait — wallaby. Yeah, I’d probably get a wallaby.

“Well? What would it be?” David waited while I tried to be clever. He waited for a while. And then he went to get another drink and returned to wait some more.

“I don’t think I’m a traditional boat-name kind of guy,” David said. “I mean, I probably wouldn’t follow the usual ‘rules’ for boat-naming. You know, there’s naming the boat after someone you love —”

“That could work: mine would be the David II,” I said.

“I’m not sure how I feel about that. There’s only one David,” David said. “Anyway, there’s also naming it after how much money you spent: like, some people call it Money Pit, or naming it after how you came by the money…you know, like Pick Seven. There’s the references to escaping — Liberty, Hydrotherapy, stuff like that. And then, of course, the puns.” David didn’t have to give examples of these — we’d already seen a few, and I was familiar with many more: Aquaholic, Nauti Boy, Vitamin Sea.

The sun had gone down and a full moon had risen. A few wispy, dark clouds passed in front of it, as though illustrating a haiku poem. After dancing a bit, eating sushi (Jane and her husband Bill had arranged for Hive to set up a sushi bar on the yacht), and chatting with old and new friends, I found David on the bow, taking photos of the sparkling city lights reflected in the water.

“I refer to my car as ‘the Barbmobile.’” I said, picking up where we’d left off.

David laughed. “You would call a boat the Barbmobile?”

“No…maybe Barb’s Boat. I don’t know…that sounds pretty bland. I like puns, but I like alliteration even more.”

“Dilemma? Too negative,” I said.

“I just figured mine out.” David wore a satisfied smile. “Tardis.”

“It’s a boat, not a time machine,” I said in a pissy tone, mostly because I was upset for not coming up with it first. After all, we’d nicknamed our cube-shaped home the ‘Pandorica,’ another reference to Doctor Who, the show we’re both geeky for. David even has a T-shirt that reads, “Not that kind of doctor.” I have one with an image of the Tardis that reads, “Mad man with a box.” And we fight over who gets to play with the sonic screwdriver.

“It’s a vessel that travels through time and space,” David said. “I believe a boat can do that.”