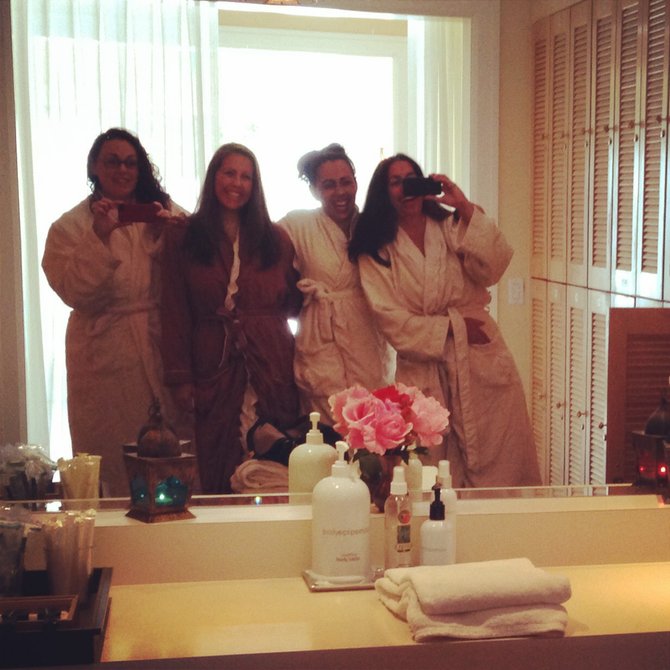 We were using the mirror on the wall to take a group selfie when Brisa, the spa director, arrived with the mimosas. Brisa handed me, Jane, and Heather our drinks and had just turned to hand Jenny hers when she stopped, looked Jenny up and down, shook her head, and clucked her tongue. “Oh, no, that’s not right; that robe’s been in the dryer too long,” Brisa said. “I’m going to get you another one. It’s not supposed to look like that.” A moment later, she disappeared once more beyond the curtain to the ladies’ dressing area.

“I was wondering why everyone else’s robe was white and mine was red,” Jenny said.

“I just assumed it was because you were adopted,” said Jane. At this, Jane, Heather, and I burst out laughing. As the only blonde in a brunette family of six, Jenny was used to being labeled “the milkman’s daughter.” As a child, this was probably traumatizing for her. Now she just rolled her eyes at us, took a sip of her mimosa, and waited for her new robe.

It was a typical spring day in San Diego: 70 degrees and sunny, with the occasional breeze escorting a fragrant mixture of blooms, greenery, and the nearby ocean into our nostrils. We noted with amazement that this was the first time all four of us had visited a spa together. Heather had been a few times with friends, but Jane and I, as the two who most prioritize pampering, are the family spa specialists.

Jane and I go to a spa together at least once a year, usually in March, for Jane’s birthday. In fact, this spa outing was a birthday celebration for Jane, but we were over a month late, already well past Heather’s birthday and nearing in on Jenny’s, which made it a sort of birthday three-fer.

It felt right to have our inaugural sister spa day at Estancia in La Jolla, the same place to which I took Mom for her first-ever spa experience. This wasn’t Jenny’s first, but it may as well have been — the closest she’d come to a spa day was a couples massage she got on her honeymoon over five years ago. I was eager for Jenny to enjoy her first real spa experience, and we were all excited at the prospect of making this a regular thing — of having a reason for us sisters to spend time time with each other while taking a break from our responsibilities.

After Jane and Heather abandoned the scalding steam room (a cartoonish plume seemed to chase them as they escaped), they joined Jenny in the Jacuzzi. I sat in a chair above them in the shade as my sisters simmered in the boiling water. Steam rooms, saunas, and hot tubs all give me headaches. (I even take my showers just barely on the warm side of tepid.) As we relaxed, I noted the list of warnings on the sign beside me; stuff like, try not to be pregnant in the water, and don’t drink alcohol because the heat magnifies its effect and might make you dizzy. I wasn’t concerned for my sisters because I knew none of them were pregnant and, as a regular drinker, I didn’t consider a mimosa to be alcohol.

Jane and Heather were called first, leaving Jenny and me to sit and chill for another hour before it was our turn. Melting into the outdoor sofa, and two sips into her second mimosa, Jenny said, “I can’t remember the last time I felt this relaxed.” She did look the calmest I had ever seen her, laying back as she did on that pile of pillows, a lazy smile on her face. I could only imagine how rare a handful of quiet hours in a miniature paradise must be for someone with a four-year-old and a toddler at home. I took a moment to appreciate my inability to relate.

Because I was the expert here, I explained to Jenny what she could expect from the facial — how they’d clean her face, then probably put on a mask and take it off, and at the end of it all, she’d walk out with glowing skin and a light buzz from the soothing experience. For all my elucidation, I failed to share a crucial bit of advice to the newbie, and that was to be sure to drink the cup of water the aesthetician would hand her at the end.

Afterward, on our way to lunch, Jenny complained of a headache. It was 1 p.m. and she’d had two mimosas in lieu of breakfast, hung out in a hot tub, and then received an hourlong facial, all without taking one sip of water. Jane, Heather, and I had guzzled the cups that were handed to us, and the first thing we asked for upon reaching our lunch table was a round of waters. “None for me, thanks,” Jenny said to our shock, opting instead for a diet soda.

“You really should drink some water,” we insisted. But it was too late. An hour later, Jenny lost her lunch due to the nausea caused by dehydration. A condition that could have been avoided had I imparted, in all my great spa wisdom, the importance of that little cup of water. Jenny’s three older sisters — we who should have been looking out for the youngest, regardless of her current age — felt guilty for failing to protect our little sister on her first, and what she has since declared will likely be her last, spa day.