And the Emmy Goes To… 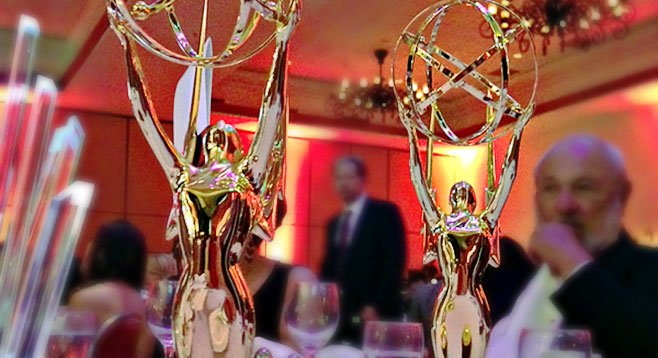 Our Emmys, on the table right after we got them

David and I got into the car, fastened our seatbelts, and just sat there for a second. I turned in my seat to meet David’s eyes. We stared at each other in silence, allowing the surreality of the past few hours to seep in. I mirrored David’s expressions: a flicker of disbelief, a quirky smirk that slowly morphed into an enormous grin.

It’s not like we’d been intentionally suppressing our excitement back in the ballroom, it’s just that the concept of what had just happened didn’t hit us until we’d stepped away from the noise and lights and had a moment to sit in a quiet, dark space. “We just won Emmys,” I said. David nodded, his grin intact. “Did you ever think? I mean — like, WHAT? An Emmy?” I guffawed, and David tittered.

“Our first try ever making a TV show. It’s not even our job,” David began.

“And we hit it out of the fucking park,” I finished for him. David smiled at my rare demonstration of confidence. On any normal day, regardless of whatever project I’m working on, I’m a broken record stuck on the line, “I can do better.” But for this one night, I was dancing in the endzone.

A year ago, I was only vaguely aware that the National Academy of Television Arts and Sciences had regional chapters, which meant Emmys could be awarded to shows that weren’t aired nationally. I knew of local friends and colleagues, all in the field of journalism, who had multiple statuettes of the golden winged woman holding up what I’d always thought was a globe, but is, in fact, an atom. Her wings, I recently learned, represent “the muse of art,” and the atom “the electron of science.”

Our show, Art Pulse TV, came to be after I was contracted by a local nonprofit arts organization to create a television program highlighting the arts in San Diego and Baja. I was the executive producer and host, and I brought in David, my resident fine-art photographer and all-around perfectionist, to direct. But our titles were formalities: David produced as much as I did, and I directed as much as he did. As with any project we take on, we poured all of our time, energy, and passion into that show — we created 19 half-hour episodes in 22 weeks and brought them all in under budget.

Barbarella with her family on the red carpet.

Because the awards for the Pacific Southwest Chapter were conveniently scheduled to be in Carlsbad this year (last year the event was held in Vegas), and because all of my sisters live locally, David’s date for the evening was every female in my family: my mother and all four of her daughters.

Mom had been adorably annoying — the way good mothers are — in the days leading up to the awards ceremony. If I called her on the phone, she’d answer, “It’s spelled M…A…R… you know what, forget it, how ’bout I just write your acceptance speech for you?”

“Mom, I might not win anything. You need to prepare yourself for that. Shit, I need to prepare myself for that,” I’d say. We’d received four nominations, and though we were obviously hopeful, we were trying to manage our expectations should none of those nominations turn into a win. When I considered this possible outcome, it was especially reassuring to think about how nice it would be to have my family beside me with their ability to pivot from cheerleading to consoling.

When my name was spoken onstage, just after the words, “And the Emmy goes to,” my family exploded in whoops and hollers, sounds that were even sweeter to my ears than the announcement that prompted them. I found out later that, when the nominees were being announced, Mom had anxiously dug her nails into my sister Heather’s leg. “Yup, that’s gonna bruise,” Heather said. “Your mother cried the whole time you were up there,” my friend Terry told me when David and I returned to the table after collecting our statues and giving our brief, hastily written and practiced under-my-breath-all-night acceptance speech. Terry, who has 13 statuettes at home, was one of the evening’s presenters. She was seated at our table along with fellow presenter Bob Gardner, who, with 31 ladies all in a row, holds the record for most Emmys in our region.

David and I were each awarded a statue. I later joked to friends, with an exaggerated douchey tone for comedic effect, “Some people have his and her towels…” David’s parents with his Emmy

But that was all for fun. I knew David wasn’t going to keep his golden girl — in a few days, he’d be sending her to live with his parents, particularly to cheer his father, who has been in the hospital. Thinking now of David’s gesture, while reflecting on my own family’s efforts to fortify me over the years, my eyes well with emotion as I’m overcome with love and appreciation.

To have won an Emmy is awesome and somewhat mind-boggling. But that’s nothing compared to seeing the pride of our parents and siblings, their excitement eclipsing our own.

At the end of the night, as my mother was introducing herself to everyone around us, “Hi, I’m the mother of the Emmy winner. Oh, you’re speaking to the mother of the Emmy winner. Yes, my daughter won an Emmy, yes,” I rolled my eyes at her for show, but secretly I was beaming. If I could only capture that look on my mother’s face and preserve its likeness, it would be more precious and meaningful to me than all the golden statues in the world.