An Aunting Expedition to SeaWorld (I TOUCHED a PENGUIN!) 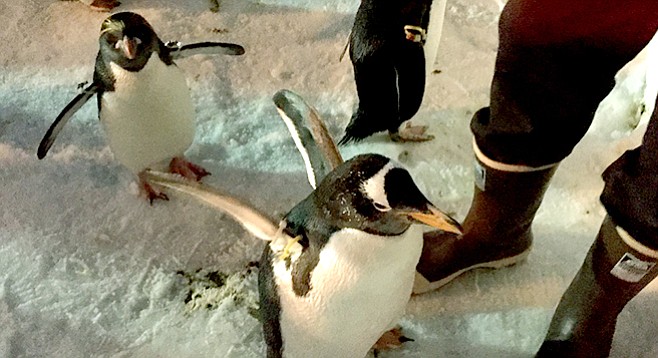 Olivia, having not yet attained whatever age and height one must be to ride shotgun, had been relegated to the backseat. As we passed the first sign for SeaWorld, I heard a little gasp, and saw the flicker of recognition in her wide eyes in the rearview mirror.

“What’s up, you see something back there?” I said.

“Oh, ha, no, there was a dog in that car,” answered my nine-year-old niece. I found it endearing, her pretending to still be in the dark, as if figuring out the surprise on her own might spoil my fun. I’d had her guessing for a week. Her first guess had been a “pug event,” because she knows that I know how much she loves those snorty, flat-faced pups. She even has one, a grunting fawn named Frodo. Apparently, when I insisted the surprise was for sure not pug-related, she jumped to the next item on her list of things Aunt Barb is into. “A bookstore?” As if I’d pull her out of school for a secret day of book browsing. I wondered if she was trying to manage her own expectations. Not that we wouldn’t have enjoyed a biblio-based excursion — when I picked her up, the first thing Olivia did was show me her new Doctor Who coloring book (and the first thing I did upon arriving home later that day was order one for myself).

“You saw the sign, didn’t you,” I said with a smile that was more conspiratorial than accusatory. “So, you know where we’re going now?” The freckle-faced, brown-eyed blonde in the back confirmed with a giggle and nod that, yes, she knew. “Well, that’s not all there is to it,” I continued. “There’s a surprise inside the surprise.”

My three sisters have two children each, granting me four nephews and two nieces, or as I prefer to refer to them, six niephlings. I do my best to single them out for memory-making experiences so they each have “their special thing,” ideally a thing that is based on a shared passion. One Sunday afternoon when the entire clan was gathered at my sister Heather’s for a barbecue, 11-year-old Brian overheard Olivia trying to guess her surprise and piped in, “Is it a food thing?” Brian is the only one of the six who is an adventurous eater, so David and I occasionally introduce him to new and exotic fare.

“No, Brian,” I answered. “That’s your thing.” He smiled and returned his attention to blowing shit up in his bid to overthrow some Central American-esque dictatorship in the video game he’d been playing.

The last time I’d had this particular niephling to myself was six months earlier, when I took her to the Trolley Dances. That was also the first time we’d ever been alone together, which I later decided was the reason Olivia had been so quiet that day. Whether it was because she was a little older or because an outing with her elusive Aunt Barb was no longer uncharted territory, this time around she seemed relaxed and conversation came easily. Or maybe it was because I’d finally found the right shared passion, that one thing about which both Liv and I were truly and ridiculously geeky: animals.

It was warm and sunny with a cool ocean breeze, a typical San Diego day, perfect for a visit to SeaWorld. The last time I was at the park was nine years before, also with Liv, who was then a baby in a stroller, and her older sister Bella, who was a toddler. As I was new at “aunt-ing” and they were still too young to be forming long-lasting memories, my sister Jane was along to spend time with me and properly watch after her progeny, lest I drop one of them into the shark-petting pool or something.

This trip was different. We weren’t here to see the normal shows or amble through the usual exhibits. We weren’t even going on any rides. We were there for one thing: the penguins. Because I’m pathologically punctual, by which I mean early, we had to wait a while outside the Penguin Encounter, where there was an open exhibit of Magellanic penguins, a South American species that is accustomed to warm weather. We stood in the sun and watched the black-and-white birds while we narrated their actions. “Hey, guys, wait up, I need to be at this meeting,” Olivia said when one straggler followed a group into the water. “I’m gonna get you,” I said, as we observed one penguin waddling after a bee.

As the clock ticked forward, I decided it was time to let Olivia in on the big secret. I bent down until we were eye-to-eye and said, “Olivia, we’re not just going to look at the penguins. We’re going to meet a penguin. See, my friend Thom is the man who cares for them here, and he’s going to take us in the back for a special visit.” Olivia’s smile widened. “I don’t know if we’re going to be able to touch one, but I hear there’s a baby — a big, fluffy baby — that we’re going to get to see up close.”

Thom is a father of two, but I have a feeling he was great with kids long before he ever became a dad. He greeted us and walked us back behind the scenes for what the park calls a “Penguin Up-Close Tour.” As Thom shared bits of trivia about penguins, Olivia remained silent. Even when she got to touch one — a moment that made us both giddy, as we were invited to pat the solid back of a female Macaroni penguin (the ones with the yellow feathers that look like an old man’s comb-over) — she barely uttered a sound. It was only when we were introduced to the King penguin chick, which was almost as big as Olivia, and fluffier than her fluffiest stuffed animal, that she revealed her delight by squeaking, “It’s so fluffy!” When it was my turn to pet the giant chirping chick, I was so overcome with glee that all I could do was giggle and confirm Liv’s analysis: “Oh my God, it is so fluffy!”