A Room with a CLUE 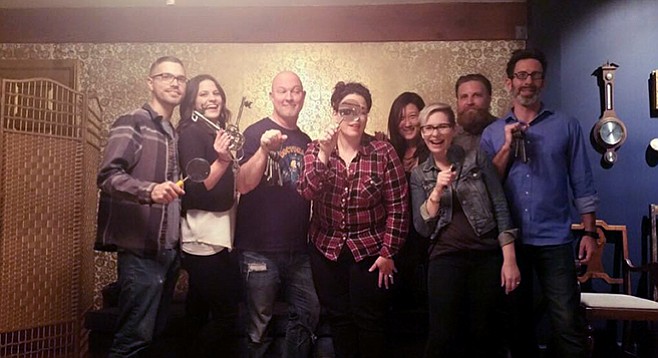 The unknown is a frightful beast. It feeds on fret; if it is to remain peaceful and sated, it must be constantly dwelled upon, ideally by a vigilant worrier such as myself. It’s a bitch of a watch, but someone has to prepare for every improbable-but-possible worst-case scenario, lest the demon slip through the gate and kill us all while we’re otherwise occupied. Despite my dedication to the mission, I admit the occasional respite is welcome. I imagine this is why I felt a strange sort of relief when David expressed his apprehension about our impending night out.

“Ugh,” David said. “Why do we have to be locked in a room solving puzzles?”

“It’ll be an adventure,” I said, unable to contain my smile. “Don’t you want to see everyone?”

“Yes, of course, but couldn’t we just hang out and have cocktails?”

“We can still have cocktails,” I said. “They’ll just come with a side of adventure.”

A few months ago, I had no idea that places such as Escapism Puzzle Room existed. It was our friend Grace who booked the room. But from the time I received the text invite to the day of our appointment, it seemed I couldn’t avoid hearing about all the escape rooms that had popped up all over San Diego in the past year (there was even one directly across the street from the one we were going to). In these real-life versions of popular puzzle-based video games, a group is locked in a room and they must work together to follow clues that eventually lead to finding the key that will allow them to escape.

A few days before our escapade, Melissa (who would be a member of Grace’s escape squad) and I met up for wine and nibbles at the Rose in South Park. When we were on our second glass, she turned to me and said, “I have a confession to make. A few weeks ago, the four of us tried the escape room downtown.” I didn’t understand why it was a big deal until she finished her confession: “We didn’t make it out.”

“Well, I live for puzzle games,” I assured her. “With me and David in tow, there’s no way we won’t solve it.”

“Then again, the one we did supposedly has, like, a 17 percent success rate, and the clues were really hard,” Mel said. “We just lost track of time and next thing we knew, the hour was up.”

I wasn’t worried — I solved all ten levels of Monument Valley in a few hours and mastered most of the other puzzle games on my phone on the first try. If this room were anything like those games, it would be a cinch. David, whose phone contains only one game — Solitaire — did some research to learn what to expect. With consternation, he mentioned we might have to know Sudoku. I shrugged off his concerns. I’m not great with numbers, but I didn’t need to be. Between the six of us, someone was bound to know how to do math.

I couldn’t remember the last time I’d felt so positive about something I’d yet to experience. I could sense David’s dread, but just before we headed out, he slapped a smile on his face and said, “Maybe it won’t be that bad.”

We arrived at Escapism Puzzle Room to find we were paired with another couple (something we knew was likely to happen, as the puzzle room accommodates eight). While hanging out in a waiting room festooned with locks, keys, gears, clocks, and other Sherlock-y, steampunky items, we amused ourselves by turning the young duo into our first mystery to decipher. A few pointed questions did the trick — they were down from L.A., celebrating their first anniversary. Of dating. Six heads nodded in unison as six smiling mouths refrained from saying, “Awwww.”

A tall, pale-skinned, dark-haired dude I’ll call our guide greeted us and gave us some basic instructions. To my extreme delight, he singled David out as the “Agent of Death,” meaning that at some point David, and only David, would have a special role that would be crucial to our ability to exit the room. Our guide let us know that he’d be monitoring us the entire time, via a camera near the ceiling. This was part warning (don’t destroy things) and part assistance (if there was an emergency or if we required one of our limited number of hints, he was just a glance away).

After leading us to the room, which had been fashioned as an art gallery to fit the “art heist” theme, our guide gave us a final opportunity to ask questions. Once we were all inside, he wished us luck and shut the door. Shortly after, a timer (accompanied by suspenseful music) began counting down from 60 minutes. Everyone dispersed, investigating each object in every corner of the room — paintings, sculptures, display pedestals with combination locks hanging from hasps. I remained standing in the middle of the room, suddenly aware of two things: none of the puzzle games on my phone had a time limit, and I had no idea what to do.

As I stood there feeling helpless, a third realization struck me: my humiliation was being observed. Without turning my head, my eyes slid in their sockets to the right and up until they locked eyes with the lens of the camera. Everyone else in the room may have been too busy looking for clues to notice, but at least one guy knew exactly how stupid I felt in that moment. Fortunately, the moment passed, and it wasn’t long before I was caught up in the same fervor that had snared my friends.

I can only claim to have been instrumental in solving one puzzle, which, to my surprise, turned out to be a math problem. It was more like a puzzle assist — I merely offered the key to the solution — but it helped me feel like I’d actually accomplished something. My little assist, along with everyone else’s keen sleuthing, helped us escape from the room with ten minutes to spare. Our guide told us we were among an elite 30 percent and informed us that new puzzle rooms were coming soon. “I’d be down for trying another room,” David said. “I just hope it’s cocktail-themed.”