A good man has died 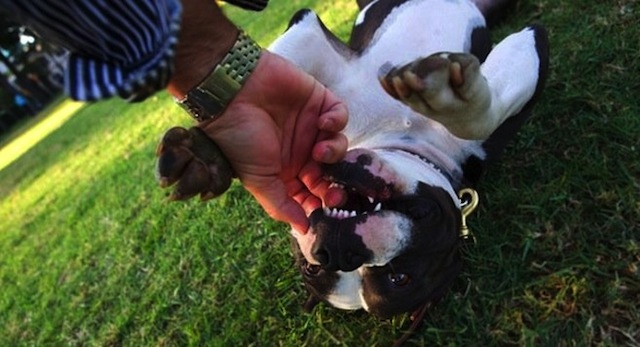 “Did you hear about Graham?” I shook my head and smiled because I imagined some hilarious Graham-shenanigan story was forthcoming. My friend’s face was somber as she reported, “He’s in the hospital. He was in a fight and he got seriously injured — like, he might not survive, serious. I heard the other guy had a gun.”

There was something so foreign and abstract about the concept of Graham — fit and feisty, boisterous professional rugby player–turned acclaimed architect — being laid up in a hospital bed, that rather than trying to process what my friend had told me, I changed the subject.

Two hours later, I received news from another friend that Graham was dead. In this friend’s version of what happened, the man who was said to be responsible for Graham’s injuries (and, ultimately, his death) was a disgruntled employee who had arrived uninvited to a party, pulled a knife, and then “stabbed Graham all about the face and head.” She went on to say that the employee had been arrested and was facing murder charges.

The details were murky, and no one knew for sure what transpired between the two men, but there was one bit of information that no one could deny — Graham was no more.

Though mutual friends had known Graham for many years, I’d only known him for three and a half. We’d met in 2009, the year I emceed Orchids and Onions, the annual architecture-and-design awards ceremony organized by the San Diego Architectural Foundation. Graham was the commentator that year, so we shared the stage, passing the microphone back and forth as we presented orchids for the best designs and onions for the worst.

After the ceremony, I wrote in a column, “If you told me five months ago that one day in the near future I’d be standing before 500 people and whipping a world-famous architect with my favorite riding crop (the red-and-black one, of course), I’d have asked for a bite of the brownie you must be eating so that I, too, could hallucinate some crazy-ass shit. Yet, there I was, in a black rubber corset with red laces, playfully brandishing my stiff whip behind Graham Downes, who had — I suspected intentionally — exceeded his time limit for accepting an award.” 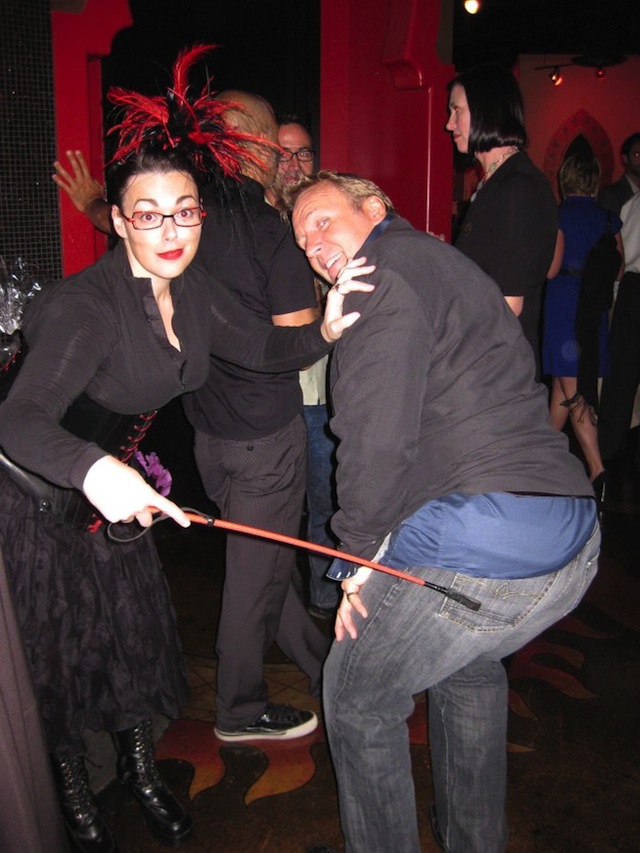 Me and Graham at the after-party for O&O

Graham and I weren’t close, but we ran in the same circles. I’d bump into him at parties and events around town, that sort of thing. For two years, he petitioned me to curate a party at his house — he wanted me to invite around 20 people he’d never met before: 20 people from various fields and industries, 20 people who would provide an evening of stimulating and intriguing conversation.

Aside from playful bantering and chatting at parties, we’d never really connected, at least not until this past December. David and I were at another friend’s annual holiday party when we noticed something was amiss with Graham. He seemed subdued, which was not something I ever thought Graham capable of. After some prodding, we learned that his beloved pooch, Madiba, had bitten someone earlier that day; Graham was distraught because someone told him he’d have to put his best friend down. I’d never seen him so despondent.

On their way out, a few people said they’d see Graham at the after-party, which was always held at his house. When Graham responded, “I don’t think that’s going to happen tonight, I’m not in the mood,” they laughed, assuming he was joking. I couldn’t imagine what it would be like for him to arrive home, in the mood he was in, and have to face a house full of people in search of the usual revelry.

“I have an idea,” I said. “Don’t go home. Come up to our place for a drink, and you can talk to Katie about your situation.” Katie, who was at the party with us, was a volunteer at a local dog shelter. After we introduced her, Katie told Graham he had nothing to worry about — it was extremely unlikely that his pup would be executed for one transgression.

There were six of us — Katie and Jordan, Graham and his lady-friend, David and me. David whipped together a smorgasbord of treats for us to sample while we sipped a variety of spirits — wine for the ladies, scotch and bourbon for the gents. Once he was at ease with the knowledge that his best friend was in the clear, Graham told stories about life in his hometown of Durban, in KwaZulu-Natal, South Africa.

Graham’s phone blew up as people texted, asking why he wasn’t at his own after-party. He’d glance at his phone, roll his eyes, and then return to the conversation. We spoke of art, cars, and the tragedy of the caste system. We laughed, we were serious, and at times, we grew pensive. We set a date for that party I finally agreed to pull together. It was nearing 3 a.m. when Graham thanked us and said goodbye.

It wasn’t the last time I saw him. There was the opening for Gang Kitchen, one of his many projects downtown. More recently, we ended up sharing the bar at Cucina Urbana. David and I had been dining late when Graham and his office team came in, celebrating something…I can’t remember what. The date for the party came and went. Like the basis of so many regrets, we claimed business and put it off for another “soon, let’s do it soon” commitment.

Graham was in the midst of so many plans. His calendar was full of appointments he’ll never get to keep. His Facebook page is now flooded with notes and photos; most of the messages addressing him directly, as if he can still check his notifications.

Though I mourn the loss of my friend-in-the-making, I believe the tears I have shed these past few weeks have more to do with the implications of his passing. The suddenness of Graham’s death shook the foundation beneath me and shattered the fragile, false sense of certainty I had that there will be a tomorrow.

I realized it doesn’t matter what plans you have or how lively you are; no amount of prestige or fitness or wealth or friends can protect you from leaving things unsaid, undone, untried. I’d say it’s not fair, but according to my parents, the first rule of life is that it’s not meant to be fair.