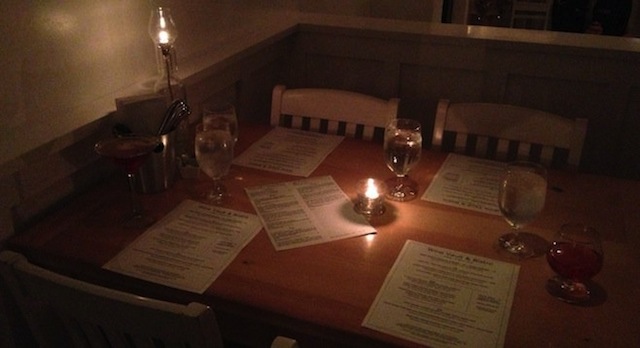 It seems David and I only get to Wine Vault & Bistro when our friends Hannah and Allard invite us, even though they live all the way across town in Kensington, and David and I are close enough to walk there. It’s not because the food isn’t good (it is, which is why I’m telling you about it), or that it’s not affordable to frequent ($20 for three courses is a Restaurant Week sort of deal, and Wine Vault offers it year-round). We did make it there a few times without our friends, but for the most part, I rely on Hannah and Allard to parse what I find to be a confusing schedule: some nights there’s a 5-course tasting menu, some (my favorite) there’s the 3-course prix fixe, yet other nights there are wine tasting events with only one or two seatings, sometimes the place is closed, and other times they take patrons on wine and food excursions out of town. The best I’ve been able to retain after a full year of trying to “get it” is that chances are that on a Thursdays or Friday, I’ll be able to order from the weekly-changing, but always delicious items offered on the $20 prix fixe menu. Hannah has it down, so I’m pretty sure my confusion and inability to grasp the format has to do with some mental block on my end.

Anyhoo, Hannah made reservations, and we found ourselves (happily) at Wine Vault again just last week. Because we’re pros (and I’m a lush), we began with a cocktail, knowing we were still going to choose the wine pairing for dinner (three glasses for an extra $15, also a great deal). I went for a Manhattan, because I’m a classy lady. Allard ordered something called “Blade 209.” I’m not usually a gin drinker (I prefer bourbon-based cocktails), but after taking a sip of the smooth, lightly floral drink, I needed to know the flavor was achieved. The recipe was devised by owner Chris Gluck, who described the process to me: “We take a 50/50 mixture of dry vermouth and olive brine and mix it with ice in the martini glass, so it chills the glass with the vermouth and olive brine. While the glass is chilling, we take a shot of 209 and a shot of Blade — two really opposite gins, 209 is very masculine and Blade is more feminine and floral, but the combination is absolutely spectacular — we take the martini glass, turn it upside down and swirl it, and this creates a faint film of olive brine-slash-dry vermouth mixture, which is really, really subtle.” On occasion, Gluck says he will add Rusty Blade to the finished drink. “Just a touch, like a splash,” he says. The gin, which is aged in used wine barrels, is hard to come by — Gluck’s allocation is only one bottle for every six months. Gluck explains that the gin gets its “orange-y pink tinge” by “extracting color and flavor from the oak.” After we caught up and enjoyed our cocktails and some very good, warm bread (best if sprinkled with the sea salt provided), we finally made our choices for the meal. I began with what was billed as a “crispy poached egg,” served with “smoked potato and saffron confit, and roasted scallion.” The egg is poached, and then transferred to cold water to halt the cooking process. Then it is breaded and fried. The dish also contained squash blossoms (perhaps a last-minute addition). The sauce was flavorful and rich. The egg was gooey and the also quite tasty, but there was no “crunch.” Instead, it was soft, as though the fried breading had grown soggy. Had I not been expecting a “crunch,” I’d have no complaints. I enjoyed the flavor so much I was stingy with the forkfuls my dining companions requested. David got a salad with Asian pear, avocado, pistachio, and stone crab, in a green apple dressing. I noticed other citrus bits on there, and the foamed dressing was a nice touch. He liked it, but I wasn’t interested in changing gears from the richness before me, so I declined the bite he offered. Though the sea bass looked tempting (and was indeed delectable — Hannah ended up ordering it and giving me a bite), I opted for the vegetarian entree, mostly because its description baffled me. “Konbu braised artichoke barigoule” with “gigante beans, roasted mushrooms” and a brown butter potato puree. I was not a fan of the food smear method of plating (it was a task to scrape the sides of the deep square dish to include that flavor-texture element of the dish with others on my fork). But once I dug in, I stopped squinting my eyes at the messy-looking receptacle and simply enjoyed what was inside. It tasted like a lavish, meatless stew, and missed none of the deep umami notes I would usually crave in a stew with meat. Allard, who ordered the same thing, ended up asking for more bread so he could sop up every drop after his fork and spoon had done their jobs. David ordered the “11-hour sous vide tri-tip,” which was served with charred cauliflower, sun-dried tomatoes, and parsley root in the red wine jus. As with every other dish, this was a sophisticated dish, and it tasted as good as it looks in this picture here. For dessert, the table was split. Two of us (including me) got the cheese with buttermilk biscuit, honey comb, quince and cashew butter, and the other two ordered the pecan cake with parsnip ice cream, cereal milk, and maple. Both desserts were equally moan-worthy, but I was happy that I’d opted for the cheese, as it had the perfect blend of sweet to savory for me to end on. I was shocked when we received the bill, as I’d expected it to come out much higher. We all left sated, but not overstuffed, and vowed to go back soon.