Veggies and Art at Alchemy in South Park

I had only been to Alchemy once before, a very long time ago, and it had been a so-so experience, so I just never made my way back. But after running into two people in one week who both professed their love for the South Park neighborhood restaurant, I finally decided to give it another go. And I’m so happy I did.

My friends Jane and Bill live within walking distance from Alchemy, and they were among the several who extolled the quality of the food there. I was happy when they joined David and me for dinner so I could have a few experts walk me through the menu. Jane explained the community-oriented nature of the restaurant. She pointed out the artwork (which included a giant sculpture of a tree in the center of the dining room) and explained that the art is always changing. Sure enough, a menu featuring special events on the table elaborated, “We like art and artists, we want to support them, so we consider our restaurant an exhibition space. The artwork rotates on a six-week basis and it is always for sale.” The restaurant only takes 10% of the sale price, which is less than the usual 20% for art consultants and way below a gallery’s 50%. 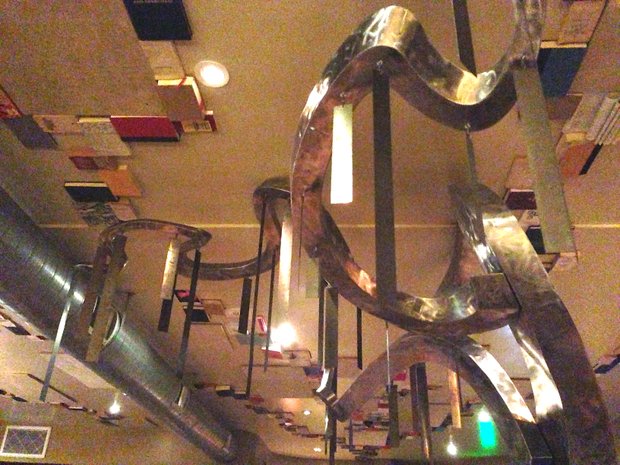 Abstract angle of the tree sculpture by Todd Williams

We began with cocktails, wine, and a catch-up sesh. 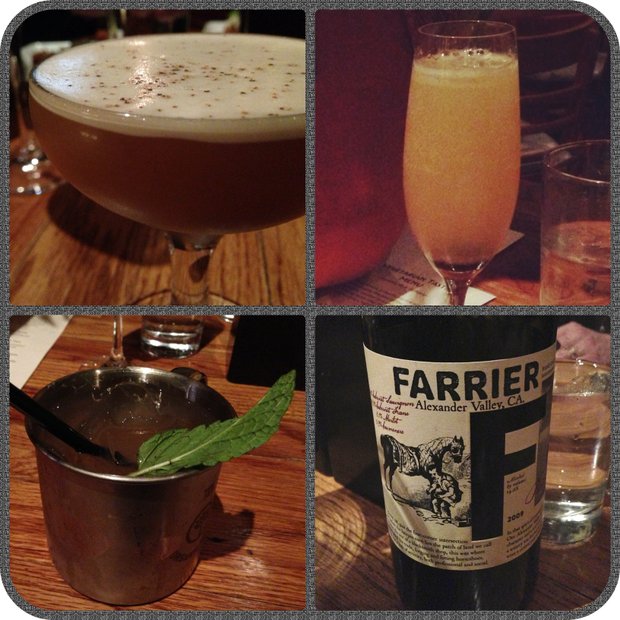 “Oh, that’s right, it’s Wednesday,” Bill said, as he looked at a three-course tasting menu (on a separate page from the regular menu). “I’m not a vegetarian, but the vegetarian food is so good here that I’ll often choose it, even though I like to eat meat.” Jane and Bill both opted for items on the veggie tasting menu, while for variety, David and I chose to order off the regular menu.

We started with small snacks. David and I shared the “piquillo rellenos,” barbecue pork stuffed in a mild Spanish pepper. Though it wasn’t spicy, I wouldn’t describe the flavors in this bite as “mild.” The pork was succulent, and the natural sweetness of the pepper held its own. 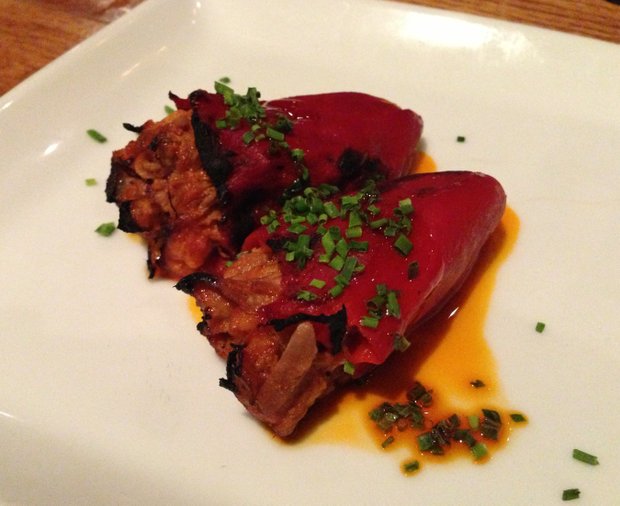 Bill and Jane shared the Baja fish tacos (white sea bass “lightly fried” in beer batter on house made corn tortillas and cabbage slaw). Bill liked them so much he almost ordered a second plate so David and I could try one while he had another, but we knew there was a lot of food ahead of us, so we held off. 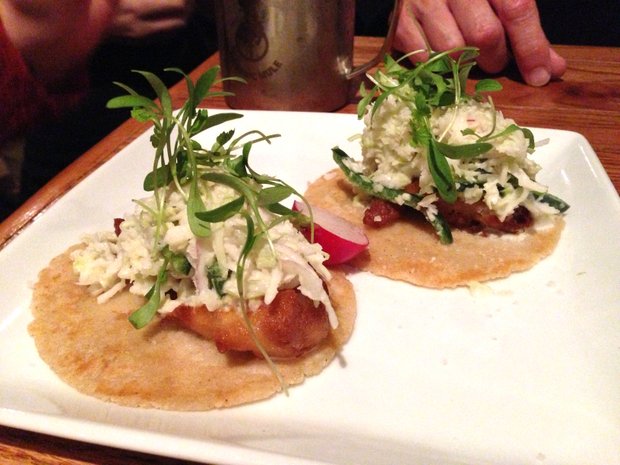 For the first of their three-course veggie tasting, Bill and Jane each got soup. Jane went for the “pumpkin-pasilla bisque,” with bliss pumpkin, cream, pumpkin seeds, and smoked paprika oil. David preferred hers, but I favored Bill’s, which was a spicy tomato basil. Both were full of flavor, and redolent of local farm-fresh flavors. 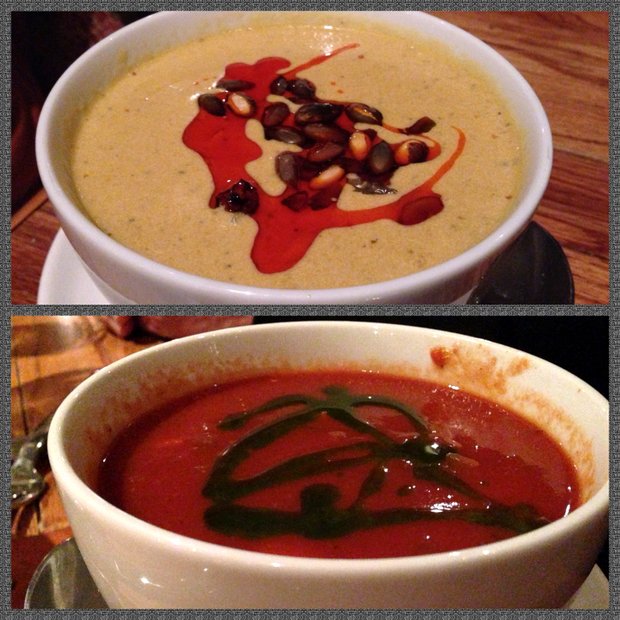 Jane knows I love a good burger every once in a while, so she insisted I try this one. “Of course the beef is grass fed,” I said, half-mocking Jane’s “go natural and local or go home” attitude. But I admit, it was a pretty damn good burger. I appreciated our server’s accommodating smile when I asked for ketchup. It’s not the usual cheese for a burger, but I liked addition of the Spanish Mahón, which added a buttery salt flavor that complimented the beef. 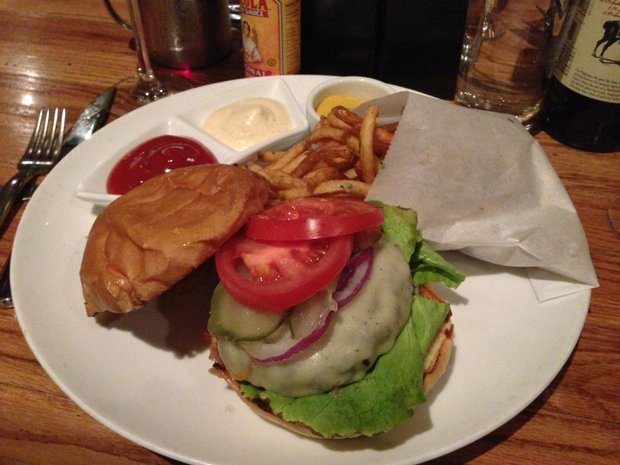 We were surprised to see a classic Korean dish, the Bi Bim Bap, on the menu. Of course David ordered it — he can’t resist a good Asian dish, especially when it’s on an otherwise non-Asian menu, because who knows how it could be interpreted. This one featured braised daikon radishes, carrots, mushrooms, marinated tofu (which was delicious), house kimchi, sunny side egg, and Korean chili paste on the side. David gave this dish an enthusiastic thumbs-up, because his mouth was too full to comment. 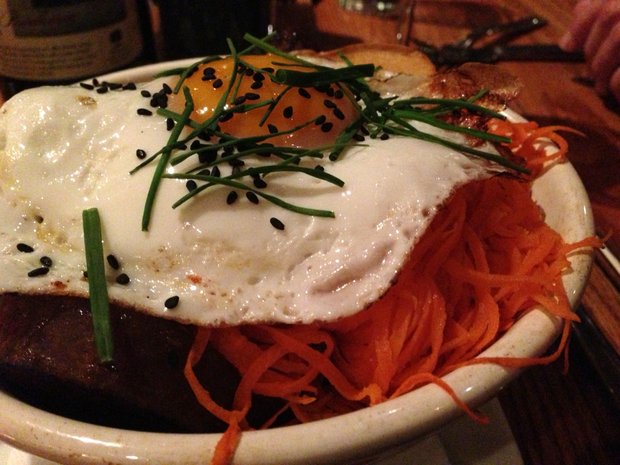 Back to the veggie dishes: I don’t even know what this is. I was too busy enjoying my burger and marveling at David’s Bi Bim Bap to remember the description or taste it, but Jane and Bill made sure it didn’t last long on the table. 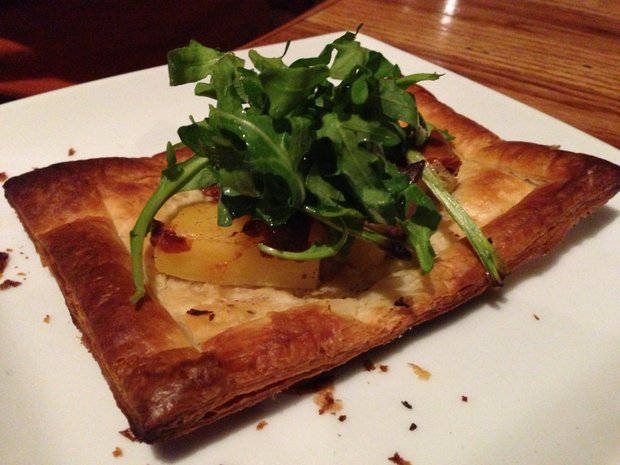 This one, however, I do remember. Mostly because Jane eventually gave me the whole ravioli I’d been nibbling away at it. These house-made raviolis were stuffed with ground greens, and that lightly creamy sauce had a kick to it that my spice-loving tongue very much enjoyed. 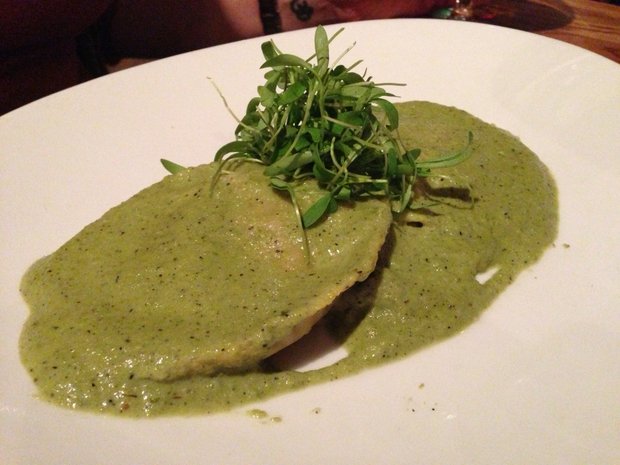 Though we were all throwing in the towel by the end of the meal, Jane insisted we try what is one of her favorite desserts in town — the cranberry bread pudding with ginger caramel and toasted pumpkin seeds. Despite being already stuffed and happy, each of us managed a satisfyingly sweet bite. 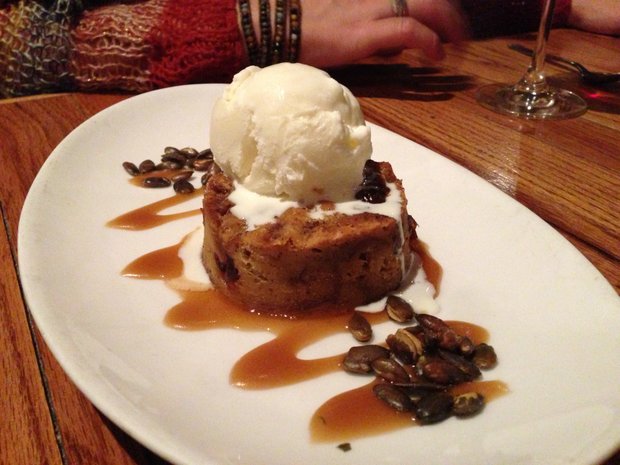 Needless to say (as if that ever stopped me before), Alchemy is back on my radar.