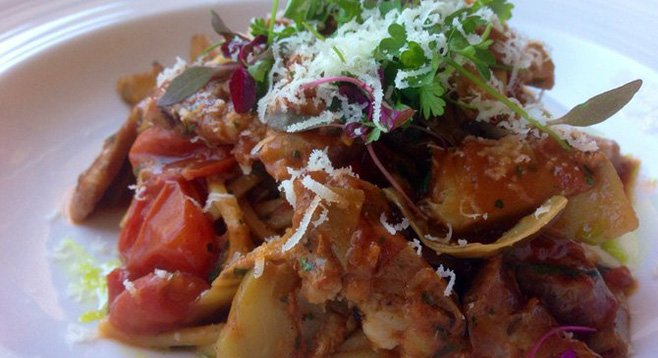 I had only been to Solare Ristorante in Liberty Station a handful of times over the past six or so years. In my mind, I had it filed as an easy spot for a relaxing lunch in the midst of errand-running, and for casual happy hour meetings with colleagues. I hadn’t been in for dinner since 2012, when I joined up with a bunch of MILFs to celebrate my sister Jane’s birthday. Between the slow service that night, and the strange appearance of a magician at our table, I made a mental note to restrict my visits to the pre-dinner hours.

But while attending the release party for the Reader’s first special arts issue in February of this year, I ran into Chef Accursio Lotà, who had just taken over as Solare’s executive chef. I met Accursio a few years ago, back when he was working at the Marine Room. I attended a dinner at his home, which for that evening, was transformed into the popup restaurant, Limone. That multi-course experience showcased not only Accursio’s molecular gastronomy skills (oyster emulsion, iced chocolate and cardamom foam, and other innovative flavors and textures), but also his Southern Italian hospitality. In my mind, Accursio’s presence signaled that Solare was serious about upping their game.

Solare sources mostly local and organic ingredients from at least ten suppliers, including Suzie’s Farm, Specialty Produce, and Better Halfshell. The menu changes faster than I can keep up with it, a testament to Accursio’s inventive spirit.

Here are a few of the dishes David and I enjoyed on two recent occasions (one lunch, the other dinner — I should note that there were no magicians this time, and the service was fast and friendly).

Rather than the crunchy, cut-your-mouth edges of bruschetta as it is often served, on toasted baguette, Solare’s version, on house-baked focaccia, is crispy enough to please on the outside, but satisfyingly soft to the bite.

But the appetizer that really blew us away was the Caprese Solare, with Gioia burrata, peaches, Suzie’s Farm arugula, basil, and pickled red onion. Rather than cut into wedges, the peaches were scalloped into thin slices, allowing them to delicately blend with all of the other flavors. Instead of a fresh tomato, this one was roasted, and the arugula and basil merged into one fresh peppery flavor. Overall, this caprese was a wonderfully unique spin on a trendy dish.

The pastas are all made fresh daily in the Solare kitchen. Accurios’s lasagna is surprisingly light. The many thin pasta layers were reminiscent of the light and airy mille-feuille (a thousand leaves). Each layer sandwiched a bit of bolognese and mozzarella, for just the right amount of savory.

David had no trouble polishing off a daily special of perfectly al dente spaghetti with artichoke, tomato, and lamb sausage. He detected some tantalizing, exotic flavors and spent a fair amount of time puzzling over what they might be. Cumin? Curry powder? In the end, he decided that it might be tarragon, but we never asked, so whatever it was that piqued David’s taste buds still remains a mystery.

At dinner, David ordered the hanger steak, with wild mushrooms, corn cake, and vegetables. The corn cake was creamy, almost custardy, more of a soufflé than cake. David could have sworn there was a touch of vanilla, but our server confirmed my suspicion that it was the pure, natural sweetness of the corn he was detecting. The steak was prepared at a true medium rare, as David had requested. My man was pleased.

Usually, a restaurant would hand the desserts over to a pastry chef. But, as with the frozen chocolate-cardamom foam he created for Limone, this chef likes to experiment with sweets as well. After tasting his pistachio crème brûlée, we’re hoping he keeps it on the menu indefinitely.

My happy-making lemon and chocolate on the bottom, scoop of hazelnut for David on top

As much as I enjoyed the creamy, nutty brûlée, when it comes to my gastronomic denouement, my heart belongs to the more traditional sorbets and gelato (Solare gets theirs from Gelato Bus Stop in Pacific Beach). Particularly, a scoop of lemon sorbet and another of dark chocolate gelato, the combination of which tastes like my childhood — each glorious tongue-full is reminiscent of hot, sticky summers in Brooklyn, when my sisters and I would take a break from sketching and coloring with our cousins to walk down to the nearest pizza joint for a slice and an Italian ice. This lemon sorbet most closely matches the ice of my youth. The combination of tart lemon and richly sweet chocolate is gooder than good. It is happiness.