Ups, downs, views at the Lighthouse 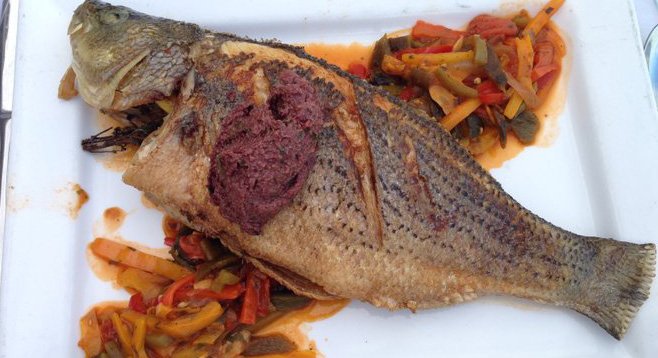 Bouts of balmy weather make outdoor dining that much more enjoyable in San Diego. Especially when the patio comes with a stellar view, as is the case with Tom Ham’s Lighthouse.David and I have dined there twice in the last month.

With its waterfront location, giant party rooms, and relatively recent addition of a wedding arch (the Island Arbor sculpture by Christopher Puzio), Tom Ham’s caters to as many brides as Bali Hai. So if you’re into looky-looing at wedding parties like I am, make a note.

Octopus app, not going to change your life or anything

For starters, between the grilled Spanish octopus and the grilled asparagus, I preferred the latter. There was nothing wrong with the octopus, which was served with a caper and tomato confit, arugula, and pretty, red house-cured olives, I just didn’t find it very exciting.

Whereas the asparagus, with its generous char from the grill, drizzle of thick balsamic vinegar, shaved parmesan, and paper-thin prosciutto, was the station at which all flavor trains arrived.

When it came to entrees, I fared much better than my poor love. I thoroughly enjoyed my whole roasted fish — sea bass, topped with a giant scoop of olive tapenade and flanked with a delicious Spanish sofrito, comprising a flavorful blend of tri-color peppers, tomatoes, garlic, and onion. The fish, prepared in the classic style with slices of lemon and rosemary sprigs nestled in the belly, was delightfully juicy. I ended up using very little of the overpowering tapenade, but that yummy sofrito didn’t stand a chance.

David wasn’t as excited about his bouillabaisse. When I asked him how the Maine lobster, scallop, fish, clam, and mussel mix tasted, he responded, “It’s okay, but nothing special.” I’m not a fan of bouillabaisse, so I didn’t taste it, but when I asked David to elaborate about his ideal version of what is one of his go-to dishes, he said, “Typically, I’d expect more broth — that’s what bouillabaisse is, it’s a stew. And I’d want the broth to be complex, with a lot of umami. Also, instead of these croutons in the bowl, I’d prefer a nice piece of grilled bread for dipping.”

I was just as pleased with my diver scallops — a much lighter alternative to the roasted fish. The preparation regularly changes, but this one was served with fresh figs (an appreciated, unusual accompaniment that was remarkably successful) and grilled squash atop a nutty, mildly sweet sauce. I savored the succulent textures and earthy/ocean/salty/sweet notes in every bite.

Unfortunately, David was disappointed in his paella. “It’s more like a risotto,” he said, of the “mushy” rice that he’d have preferred al dente. “Traditional paella is cooked over a fire, and you’re supposed to leave it alone and not stir it — that’s what makes the bottom crispy, which, for a lot of people, including me, is a treat. They even have a name for that crust, the Spanish call it socarrat. This one was clearly stirred, a lot.” In addition to mushy, he also found the rice to be too bland for his tastes. He added plenty of salt and, when eating his mostly leftover rice the next day, spruced it up even more at home with spicy smoked Spanish paprika.

You really need to try this creme brûlée

In addition to the asparagus, the one other thing we both enjoyed was the dessert. The malted chocolate crème brûlée surprised and delighted with its exotic-but-compatible flavors, such as Thai chili cherry compote and milk crumbs.

David agreed that the view alone —well, and the exceptional beer list — is enough to entice him to return with me and try other options he may prefer over his two misses. And I will insist we each get one of those crème brûlées so we don’t have to share it again.