The Marine Room: the restaurant that time forgot 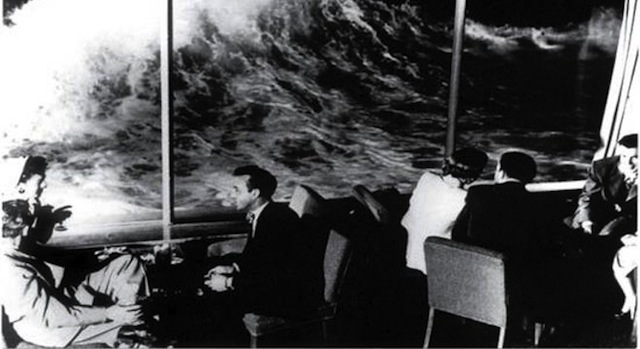 The Marine Room doesn’t try to keep up with the new kids. This 70-year-old restaurant sees no need to trade in its white tablecloths for reclaimed wood; it has no interest in forgoing its soft white shell sconces for those trendy industrial Restoration Hardware fixtures (like this one, which can be spotted at Craft & Commerce, Brooklyn Girl, Rubicon Deli, and even my own dining room at home). While other restaurants are busy reinventing and rebranding, the Marine Room remains steadfast, offering the same formal dining experience it has worked to hone since its inception prior to World War II.

I’ve known of this old dining-by-the-sea dog for most of my life. I’ve been mesmerized by photos of the ocean water coming right up to the giant windows lining one entire wall. I’d even tasted Executive Chef Bernard Guillas’s high-end, exquisite fare at foodie events and cook confabs. But the other night was the first time I’d actually stepped foot inside his domain. Walking down the staircase toward the lounge to the left and the dining room to the right, I was reminded of dining scenes from the movie, the Titanic.

David and I were led to a table by an older gentleman wearing a suit. The lounge was packed. We later heard live music, a woman singing, and viewed the lounge happy hour menu, which explained the disproportionate crowd in the lounge versus the dining room, at least before 6 p.m. After that, the dining room was as full as the lounge. Because we had early reservations, we scored a table by the window, giving us a front-row view of the waves lapping at the shoreline.

I was delighted to find portotonic on the cocktail menu, but regrettably, our server informed me that the bar was out of port. I ended up enjoying a refreshing concoction with gin, champagne, and St. Germain. David and I opted to share an appetizer, the Cypress Grove Humboldt Fog Brûlée. The kitchen split the dish for us, and we were impressed with the lovely presentation. Because each of our plates came with a small ramekin of the brûléed cheese, it seemed the kitchen was well prepared for sharers. The butter lettuce was lightly dressed with agrodolce sherry dressing (spelled “agridolc” on the menu, which might be French, but I’m only familiar with the Italian spelling), which is a sweet (dolce) and sour (agro) style dressing. Mirroring the salad, the plum coulis on the plate was the right amount of figgy sweet to balance the sour goat cheese. Half portion of the Cypress Grove Humboldt Fog Brûlée

David ordered what he later referred to as the “beautiful” Free Range Veal Tenderloin, served with truffle corn cake, apple beignet, maitake (mushroom), and Elysium black muscat (a dessert wine we happened to have at home). It was not only a very nice piece of veal, it was a generous portion, and perfectly cooked. I’ve been on a steak kick lately (I must be low on iron or something), so I ordered the Center Cut Angus Filet Mignon. Similarly to David’s dish, my meat was excellently executed — a perfect medium — and the accompaniments (porcini potato, huckleberry chutney, blue cheese, and cabernet franc reduction) served to highlight the steak’s natural flavors. We saved just enough room to share a dessert. I didn’t try to pronounce it, I just said “the pyramid thingy,” but the official menu name is Feuillentine Gianduja Crunch Pyramid. Again, we were treated to artistic plating. The pyramid was soft dark chocolate with a crunchy hazelnut base, its richness cut by the rose pomegranate consomme, berries, and caramel sauce. By this time, the sun had set, but flood lights allowed us to continue to watch the water. As we were finishing our last bites, a siege of sandpipers swept along the shore, to set about finding their own version of dinner.