The Happy Intersection of Cheap and Good (Kazumi) 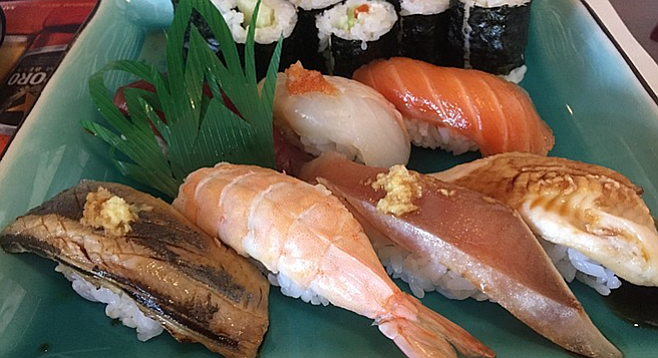 The words “cheap” and “high quality” are rarely found in the same sentence when referring to sushi joints. The cost of quality ingredients and the many years of training it takes to get the nigiri rice and sashimi cuts “just right” understandably adds up to a larger tab at the end of the meal.

Places such as Ichiban, Kawaii Sushi, and Jump Tokyo are cheap and satisfactory. The food is good, but you’re more forgiving if a cut is sloppy, the rice is not seasoned properly, or the presentation is just perfunctory. The quality of the seafood, the perfect amount of mirin and rice vinegar in the rice, and the perfection of the cuts tend to be directly proportional to the price.

But once in a while you find a place that sits squarely in the happy intersection of the Venn diagram between affordable and excellent. I’ve been enjoying lunches at one such place, burrowed in the back of a strip mall off Friars Road: Sushi Bar Kazumi.

Named for the patriarch of this family-owned restaurant that was once located on Fifth Avenue near the Landmark Cinema in Hillcrest, Kazumi-san is the man at the sushi bar. Appetizers start at $2 and sushi rolls begin at $5. The high-caliber fish is priced to reflect the underlying cost. Even so, the priciest omakase sampler, Moriawase Sashimi, is still a reasonable $22.

On our first lunchtime visit, David ordered the Nigiri Sushi, an assortment of seven pieces of sushi and one cucumber roll, all for $10.50. He thought the assortment of fish was better than that of many places — the cuts were beautiful, the seasoning of the rice well-balanced, and the fish itself was fresh.

The agedashi tofu, on the menu as “Agedofu” for $4, was a different preparation than we’re used to, with a much thicker dashi that was more like a sauce than a broth. Many versions are even served in a bowl, along with a spoon. Despite this difference, the tofu itself was crispy and the sauce savory, with a pleasant richness.

On a recent visit, we arrived shortly after opening. We were set to order sushi, but Kazumi apologized and said the rice wasn’t quite ready. It wouldn’t be long, but it was longer than we had for lunch, so we decided to try a few lunch specials. I appreciated the fact that the chef didn’t simply make the sushi with the steamed rice he had on hand — that the chef/owner insisted that it be right.

The place is small, and people tend to sit at the bar and greet Kazumi by name. More than once I heard one patron say to his or her companion, “I can’t believe you haven’t been here before. This is my favorite sushi place in town.” Many of Kazumi-san’s patrons seem to be regulars, and he cheerfully inquires about their kids or how the latest addition to their house is coming along.

I got the Teriyaki Chicken, which would have come with a choice of two rolls. I would have chosen the California Roll, but because the rice wasn’t ready, I went with the gyoza. The lunch special, with soup, salad, chicken, rice, and gyoza, is $8.50. The chicken was tender, and the teriyaki wasn’t too sweet or salty. Overall, a satisfying bento box.

David ordered the Vegetable Tempura Donburi, or “rice bowl.” As with traditional katsu-don and other donburi dishes, his was doused in a sweet and savory sauce. I loved the flavor and swiped some of his broccoli, but David was disappointed that the sauce had made the tempura coating soggy. Though he enjoyed his dish and acknowledged that he should have expected it to come that way, he still made a mental note to ask for the tempura with a small bowl of the sauce on the side next time.

Midway through our meal, Kazumi (who had earlier overheard me trying to order tamago nigiri), called to our table from behind the bar, “Miss, the rice is ready, would you like to try the tamago?” I took him up on it, and we enjoyed it as more of a dessert than an appetizer as the tamago, true to tradition, was cool and sweet.

Next time we’ll arrive a little later and sit at the bar so we can see what else Kazumi has to offer, both in terms of food and conversation.