The first 100 to Rakitori get free ramen 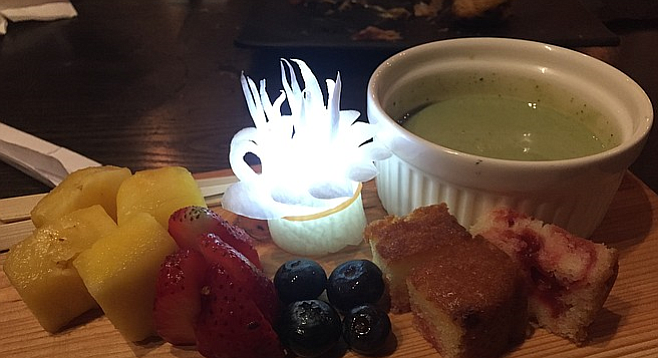 David and I have been meaning to stop by the new Rakitori Japanese Pub & Grill on University Avenue since we first saw the sign go up nearly three months ago. When we made it this week with our Asian-food-loving friends Katie and Jordan, it was to find that they had opened their doors only a few days prior.

So instead of being late to the game, we slipped in during the soft opening in advance of their official opening, which is today. For their grand opening, this yakitori and ramen-centric joint is giving away a free bowl of their Rakitori Miso Ramen to the first 100 patrons who walk through the door, beginning at 11 a.m.

The owners and staff

If you’re interested in trying anything other than the ramen or yakitori, I recommend the Bao Bao Bun ($6). This flavor-bomb of a steamed bun with BBQ pork and sweet and spicy cabbage salad was a hit with everyone at the table. The texture of the steamed bun was perfect, not too gummy or dry, and the pork was hot and savory.

It was a killer Korean food bite, which led me to ask about the chef. It turns out the chef/owner is Korean but has worked at many sushi restaurants since he came to San Diego seven years ago. I would encourage him to pursue more of what he’s great at and add more of these Korean flavor combinations gems to the menu.

Our beverages were as beautiful as they were delicious. There doesn’t seem to be any liquor or wine here, and I’m wondering how well that will play in their Hillcrest neighborhood, but we were happy to try the exotic Iced Vinegar Juices ($4).

The blueberry one smelled like vinegar, which put me off, but the moment I took a sip I could see how it worked. It tasted sweet and sour, in a good way. David and I had Thai Iced Boba Tea, our favorite flavor. Mine was perfect, but David wished his boba balls had been more thoroughly softened.

As the place is new, and I’m loathe to start picking apart food items before a joint has opened, I’ll just say that the chef, with whom we spoke, said he is playing with the seasonings, allowing people to add spice and salt to taste rather than adding those seasonings in the back. In particular, David found the Oxtail Ramen ($9) to be bland. We were told the oxtail had been simmered for ten hours, and the chef did not want to lose the subtle flavor of the meat.

Of the other meats we tried, we enjoyed the flavor of the Korean Galbi appetizer the most. Again, it seems that all of the strongest items on the menu skewed more Korean than Japanese. These short ribs, sliced thin with the bone in, were savory and sweet.

The chef’s experience at fancy sushi bars was most evident when dessert arrived, with a carved, beautifully lit daikon radish garnish. We got the Green Tea Fondue, with good strong matcha flavor and a rich sweetness from the white chocolate with which it was mixed.

Our server was the chef’s wife, and she was able to provide detailed answers to every question we had. All of the staff (including the chef, who came out to say hello to some of their first patrons) were friendly and enthusiastic. As we were leaving, the collective sentiment was, “I hope they make it.”