Taste the East at Lobster West 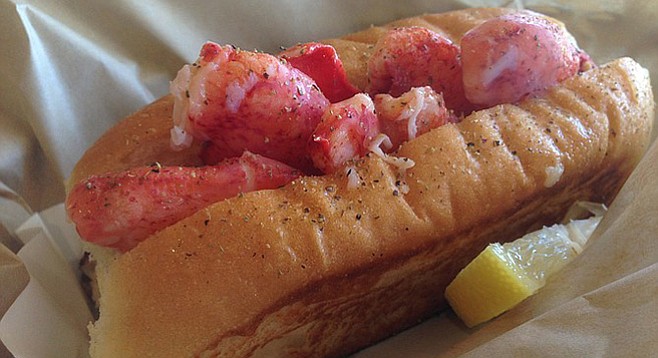 It was only a handful of months after he’d finished his lobster crawl across the island of Martha’s Vineyard (ingesting 9 lobster rolls in 11 days) that David discovered Lobster West in Encinitas. We were at an event where two members of the family-owned business, a brother and sister, were serving up samples of lobster bisque. David and I both enjoyed the taste (chunks of fresh, sweet lobster, a delicate application of cream, and an aftertaste of Sherry), so we decided to take a drive up the coast and see what other lobster delights these people had to offer.

Though we love most everything about our hometown of San Diego, when it comes to seafood both my man and I tend to prefer the taste of creatures from colder waters, namely those near Alaska and New England. All lobster procured by Lobster West is Marine Stewardship Council-certified Maine Lobster, which basically means it’s bona fide sustainable and eco-friendly and all that jazz. But David wasn’t very concerned about that, he just wanted to make sure the sea-roaches (that’s what I call them) were the giant, sweeter kind mostly found off the coast of Maine.

The space itself is reminiscent of the seafood shacks back east, where people queue up for lobster rolls or fried fish and shrimp. The main difference being that this menu offers no fried items. It’s simple, short, and seemingly health-conscious, featuring lobster, crab, shrimp, soup (the lobster bisque and New England-style clam chowder), and salads.

I’ve never liked lobster rolls, but that’s because I’d only seen them served with mayonnaise, and I have a serious aversion to that stuff. While along for the ride on David’s quest for the greatest lobster roll back east, I learned that some lobster rolls are made with drawn butter instead of mayo. These were the few that I agreed to taste. Here at Lobster West, we were assured that the kitchen only uses only the tiniest bit of mayo, so that it should be fairly imperceptible. David ordered the Maine Style roll, comprising chilled lobster, a “touch of mayo,” a “brush of lemon butter,” and some house seasoning ($12.95).

He loved the flavor, and the bun (sourced from a local baker) was prepared in his favorite classic style, with the outside griddled. His only complaint was the lobster-to-bread ratio; he would have preferred more lobster meat. The average price of a lobster roll on the east coast is closer to $20, and David said he would have happily paid more than $13 to improve the ratio. It wasn’t until after he finished his roll that he noticed the “more meat” option on the menu for an additional $6. I ordered the Lobster Grilled Cheese Combo ($14.95), which comes with coleslaw and a bag of Cape Cod chips. When one thinks of grilled cheese, what usually comes to mind is a vision of stringy, melty, gooey decadence. This was not that. My “lobster, cheese, sliced tomato” sandwich was mostly bread. Delicious bread, I should add, rich and filling in its own way. But the bread was the best thing about this odd concoction. Havarti cheese and tarragon were strange choices to throw into the mix with lobster and tomato. Instead of melding together for an overall yum, the flavors seemed to grimace at each other in my mouth.

While the menu may have fizzled for me, David now claims Lobster West as home to the best lobster roll in San Diego, so long as you remember to order “more meat.” When we return (and we will, because my man loves this roll), I will probably spend more time exploring the “award-winning, hand-crafted” beer from Maine or the selection of California wines. Or both.