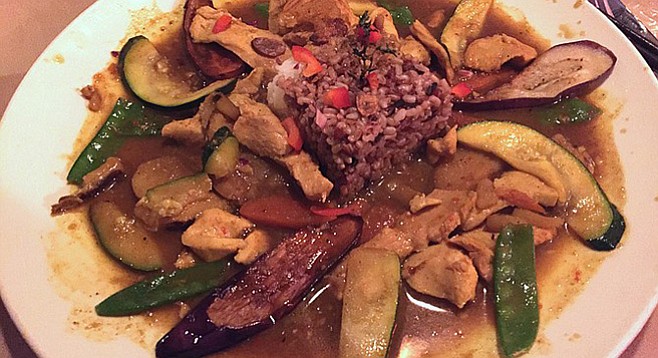 “The spice scale is one to ten, but three is medium,” said our server. She looked to be in her early twenties, but she worked the tables in the small, crowded space with the easy, professional friendliness of a seasoned veteran. Several patrons at nearby tables greeted her by name.

“If the scale is one to ten,” I argued, “then shouldn’t five be medium?” It was clear from her prepared answer that she’d fielded this question before. With a smile, she explained that she needed to give the disclaimer, because this scale was a Thai pepper scale, and tends to be much hotter than most people are accustomed to. I figured I could handle hotter than “medium,” especially on the lower end of a “one to ten” scale, so I ordered my dish at a four. “Just a hair over your version of medium,” I said.

This was the first time David and I had ever dined at DaoFu, the “Tao Vietnamese Japanese Cuisine” eatery just across the street from Lestat’s on Adams Avenue. It’s a charming neighborhood hole in the wall; the interior walls are lined with whiteboard that is entirely covered with previous diners’ doodles and comments in various colors of dry erase marker. Shortly after ordering, I glanced to my left and noticed a small illustration, using mostly red and orange markers, of fire coming out of a stick-figure’s mouth, beside a warning from someone who claimed to be a local fireman that no human should consider ordering as high as an eight on the spicy scale.

Our meal began with a complimentary salad that was so fresh and delicious, I would have been more than happy to pay for it. The tofu, made in-house, was surprisingly flavorful, and the combination of mixed greens and berry vinaigrette was simple but elegant — I could see why this place was a favorite among my vegan friends.

Had we known about the salad, we most likely would not have ordered the Japanese Gyoza ($8.28). The gyoza was on the overly gingery side for me, but my man is a ginger lover and had no complaints. I found it interesting that all prices on the menu have strangely odd endings, such as $10.11 or $7.36. We speculated until our heads hurt, but could not come up with a reason for all those haphazard numbers.

I ordered the House Curry Chicken, with eggplant, zucchini, snow peas, carrots, potatoes and onions ($11.68, see what I mean about the weird prices?). At our server’s suggestion, I chose the mixed rice, half brown, half white, which was a nice blend of chewy and fluffy textures. As soon as I took my first bite of the curry, however, regret set in. I could immediately taste the excellent flavors under all that kick, but then the kick began to push and shove and pull my hair. I thought about admitting the error of my ways and begging forgiveness, but my pride got in the way — I chose to suffer for my spicy arrogance. And suffer I did.

The Eric Stir-fry, a fusion dish

I could see from his sweat that David was in as much pain as I was. He’d ordered his dish a degree hotter than mine on Satan’s spice scale — a five, which as we now knew, was closer to an eight on a normal-human scale. He got one of the fusion dishes, the Eric Stir-fry, with pork, shrimp, chicken, and mixed vegetables, all over a big pile of thick noodles ($9.89).

The next ten minutes were worthy of a Mr. Bean sketch. David and I alternated between taking careful bites and sucking air through our teeth in an attempt to dampen the flames. I wiped water from the corner of my eyes, and when our server came by to check on us, I hid my pain as best I could, smiled, and gave a thumbs-up — I was afraid to open my mouth at that moment, for fear that I might howl from the white-hot agony. I surreptitiously sucked in so much air that I gave myself the hiccups.

The plates were more like platters, and the presentation of food was messy, but the fresh ingredients, and — beneath all that fire — the combination of flavors were spot-on. The complimentary ice cream at the end of our meal was a welcome surprise, as the cold, sweet cream finally put out the fire. And what a deal, appetizer and dessert included with the meal! As a bonus for me, they were offering one of my favorite flavors — mint chocolate chip, in a preparation I’d never had before, with a sweet and citrusy berry sauce and fresh fruit.

David and I are both excited to return soon, and we’ve vowed to not order anything higher than a two on the spice scale.