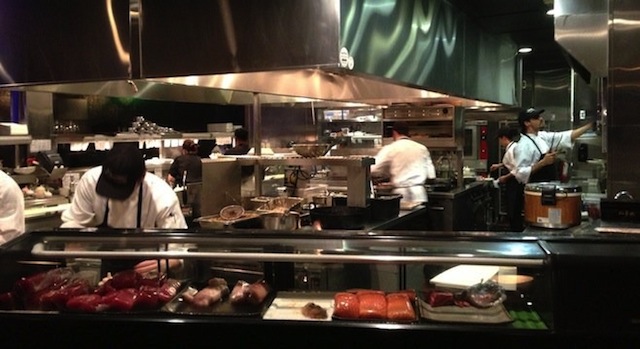 If there’s one thing I’ve learned about the medical industry from my sister Jane, who works for a massive pharmaceutical company, it’s that those people like to have meetings in restaurants — particularly in major chain restaurants. I imagine this is because most of the VPs travel, and it’s nice to have some familiarity wherever they go. But we’re not talking Denny’s or Bennigan’s — that’s not hoity enough for MDs who are learning about the latest drug developments, especially when they’re not footing the bill. These guys prefer steakhouses, where entrees are upwards of $40, and that’s not counting sides, drinks, and dessert.

Most often, Jane attends dinner meetings at Donovan’s, Ruth’s Chris, and Roy’s. The first two are old school, high-end, fancy-pants steakhouses. I’ve been to Ruth’s Chris once or twice, and Donovan’s once, both so long ago that they’re on my list to hit up some time soon because I can’t remember much past the quality beef and high prices. Jane, who is mostly vegetarian, has bemoaned the frequency of steakhouse meetings in the past. For years, I assumed Roy’s was also a steakhouse. It just has a manly, meaty sort of name, like Tom Selleck’s cowboy character in Quigley Down Under.

The other day, Jane was working at my house, as she often does, and mentioned she was excited that her dinner meeting that night was at Roy’s. “I thought you hated steakhouses,” I said.

“Oh, Roy’s isn’t a steakhouse, it’s mostly seafood,” Jane said. “And I’m so excited, because I know exactly what I’m having – the butterfish. It just melts in your mouth, and it doesn’t taste fishy at all.” Jane, along with everyone in my family, has a big issue with “fishy fish.”

A few hours later, I was driving through La Jolla while David searched for restaurant in the area so we could grab dinner before catching a movie at ArcLight Cinema. He read his finds aloud to me: “Seasons 52, that looks interesting, Blue Fin Fusion, La Jolla Strip Club, Roy’s–”

“Wait – Roy’s? That’s where Jane has her thing tonight — how funny would it be if we showed up? We have to go there. And anyway, she’s got me all obsessed over the idea of a something called a butterfish. Is that it, right there?” The neon sign read Roy Yamaguchi’s Pacific Rim Cuisine. “Couldn’t be more convenient, it’s right across the street from the theater,” I said, as I decisively drove us into the parking lot, which the restaurant shared with other stores in the strip mall across the street from the larger Westfield UTC mall.

Our expectations were low, and I couldn’t put my finger on why. “Maybe because it doesn’t have a hip name,” David suggested. “You know, it sounds like McCormick & Schmick’s or someplace generic like that.” But the moment we walked through the front door, we realized how wrong our impression had been.

Three grinning employees greeted us, and one took our name and said it wouldn’t be a problem to seat us momentarily. I used our time waiting to locate my sister, who was already situated in a big private room for her dinner meeting. I stared into the room, not minding the quizzical looks I got from her fellow industry folk, until Jane spotted me and — confused but obviously entertained — came to say hello. “You can’t escape me,” I said, in a mock threatening tone. “Just kidding, we’re going to the movies across the street, and I thought it would be funny if we showed up here.”

Jane went back to her meeting and David and I were led to a tall table adjacent to the large, open kitchen. When our server arrived, she greeted us by name (clever, I thought, they get your name before they seat you, and then everyone addresses you by name, it adds a nice, fancy-but-familiar flare).

We began with a few signature cocktails, which were not terribly exciting, but not terrible either. Then again, these were island drinks, which are heavy on the pineapple, and I haven’t been into fruity since my early twenties. We ordered lobster potstickers with “spicy tagarashi miso butter sauce” and vegetable spring rolls with mushrooms, sesame, bok choy, and a citrus sauce. The appetizers were enjoyable in the way that fried things often are, but they were also multi-dimensional in flavor and texture. A bit of sweet, a bit of spice, a bit of crunch, a bit of chew. Of course, I ordered the Misoyaki Butterfish, with “sizzling lemon shoyu vinaigrette,” and white rice that was topped with green seasonings and seeds I did not recognize, but absolutely loved. Jane was right – the fish did melt in the mouth, though the sauce was a little on the sweet side. David’s entrée was the real winner – he got the Seared Snapper with “kaboucha squash gnocchi, chanterelle mushrooms, and opal basil.” The snapper was luscious, with the clean sweet taste of the freshest kind of fish. We were impressed by the artful plating – the food was as beautiful to behold as it was to savor. When he’d finished his last bite of snapper, David sat back with a satisfied look on his face and said, “I couldn’t have wanted a better dish than that, and I wouldn’t have expected it from a 29-location chain. It looked beautiful, it was perfectly cooked, and it tasted great. Amazing presenation, and the flavors were outstanding.”

“They clearly have great management here,” I said. “I mean, from the moment we walked in, every detail has been accounted for. Service, ambiance, food. You really get that ‘aloha’ spirit. I’m not sure why I’m so surprised.”

“Well that’s easy,” David said, in his know-it-all voice. “The location and its name led us to make a false assumption.”

“You can thank Jane for the idea later,” I said. “But right now, we have a movie to catch.”