Resurrect the bird at the Crack Shack 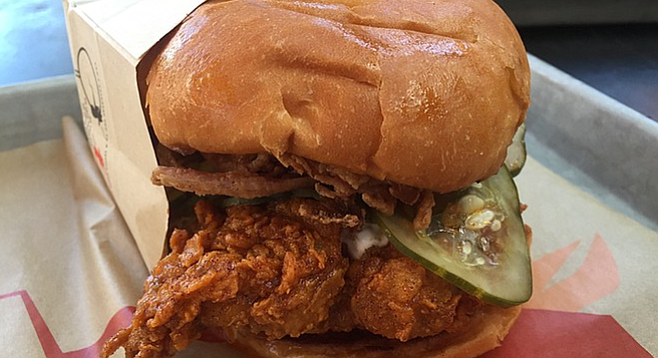 For decades, chicken has gotten a bad rap. Looked down upon by sophisticated palates, this lean and mild meat is routinely dismissed as the vodka of proteins. Growing up, all of the chicken that I ate was overcooked (thanks Mom for keeping us safe from salmonella!) and therefore as dry as it was flavorless.

As a young adult, I quickly learned that ordering “the chicken” at a restaurant was akin to asking for the kid’s menu. Not counting the succulent fried version at Roscoe’s House of Chicken and Waffles in L.A., it wasn’t until I tasted my first properly cooked Jidori chicken that I realized chicken meat could be tender, juicy, and flavorful. After taste-testing a Mary’s free-range chicken alongside a traditional, factory-raised version, I knew there was no going back.

After demolishing a Firebird

In recent years, revisionist chefs have resurrected the bird, and now there’s an entire restaurant concept based on chicken from one of America’s top chefs, Richard Blais, and his chef-partner Jon Sloan. Appropriating the theme of another single-meat-centric shack in town (Carnitas’ Snack Shack, which is all things pork), this one, The Crack Shack, is all things chicken and egg and promises to be sourced locally from quality, organic free-range chicken farms.

Buffalo Mushrooms — buffalo veggies are a current trend around town

I attended the opening night many months ago, and I was happy with each finger-licking bite, but it wasn’t until a recent afternoon that, after making the drive back from an event in Orange County, a hungry and thirsty David and Barb stopped in for a late lunch. We both gravitated toward the Firebird, which is fried chicken thigh, ranch, crispy onions, and pickles on a fresh brioche bun ($10). David tried to eat it by hand and was surprisingly successful, but after my first attempt at a bite I swallowed my pride and opted for the utensils. The Baja Hot Sauce (one of six sauces on offer, including Kimchi BBQ and Curry Mustard) from the condiment bar paired perfectly with each bite. I was careful to arrange each forkful so that it contained all of the elements: a thin slice of salty, vinegary pickle, savory crisped onion, sweet brioche, and mouthwatering chicken, with its crunchy fried skin. Instead of fries we shared the spicy Buffalo Mushrooms, which came with Point Reyes Blue cheese, pickled celery and carrots, and a pleasantly burning Tabasco-like sauce ($10). I enjoyed them more than David, who felt their mushroom-ness was lost inside the breaded and buffaloed exterior.

We were satisfied with our fry-fest, which was complemented by several refreshing gin-based craft cocktails. The sandwiches were delicious, if a bit overwhelming. The Buffalo Mushrooms were tasty, but we were so full of sandwich that we only managed a few bites of the mushrooms.

It’s not the sort of food to be eating every day, but as the occasional splurge it was great. David and I agreed that on our next visit we’d share either some of the bite-ables (such as the Chicken Oysters) with cocktails or one of the salads, to which we could add at least five different types of chicken.