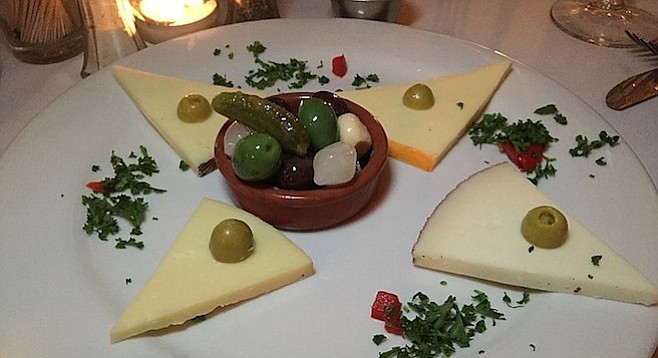 Despite the surfeit of marvelous Mexican cuisine, San Diego suffers a dearth of attractive Spanish food options. There was Iberico Spanish Bistro in La Jolla, which was good, but outrageously priced, and is now closed. Of course, there’s Javier Plascencia’s Romesco Mexiterranean Bistro in Bonita, which offers an extensive and excellent list of classic Spanish small plates, with a Mexican twist. But for a bona fide Barcelona experience, the closest I’ve found thus far is Costa Brava.

I cut my teeth on tapas at Toro, one of Ken Oringer’s Boston restaurants, to which I’ve returned half a dozen times. I’ve also been to Madrid and Barcelona, where I was able to taste the classic flavors (olive oil, cheese, ham, Tempranillo and Garnacha wine, seafood, sausage, peppers, etc.) in their native land, from the pintxos places in the Barri Gòtic(Gothic Quarter) to the legendary Cal Pep.

Costa Brava is a diluted version of the greats. Like your local red sauce joint compared to elevated Italian food at a Mario Batali flagship, it may not be a life-changing eggplant Parmesan, but it’s simple, enjoyable, and will get the job done. The ambience plays up the Spanish theme — the dining room is warm and welcoming, with white tablecloths, dark wooden chairs, arched doorways, and old country-style art on the walls. On some nights, adding to the already festive ambience, guitarists and singers perform Spanish music.

On our last visit, with a few friends, David and I ordered some simple classics, such as the Champiñones al Ajilla, or sautéed mushrooms in a garlic and Sherry wine sauce ($6.25). Though they’re flavorful enough on their own, I like to enjoy them with the fresh warm bread that comes with the table.

Not much to look at, but these chicken croquettes were plenty flavorful

Anything fried is a crowd-pleaser, and the Croquetas de Pollo ($6.95) did not disappoint, though personally I prefer versions with more of the creamy potato to chicken ratio. One of our favorite go-to appetizers at any tapas place is the pan con tomate, which is a toasted slice of baguette onto which a tomato has been vigorously rubbed, leaving only the essence of the tomato flavor, and then drizzled with olive oil and coarse sea salt (sometimes, garlic is also rubbed on, adding a bit of spice). Costa Brava’s version (Pan Tomaca con Jamón) is more like the Italian bruschetta, with diced tomatoes, garlic, and basil (an ingredient not usually found in tapas), all covered with ham. When asked whether or not they could do a simple version without the ham, we were told no — this was the only option, and it was $10.95.

We ordered a Spanish cheese sampler ($15.50), which, though plenty palatable, is pricey for what you get and, thus, probably one to skip unless you’ve really got a hankering for cheese.

To satisfy the meat lovers at the table, we got the sautéed chorizo sausage ($6.95) and the pork sausage with onions ($8.95), the latter of which came with a disclaimer — it’s blood sausage. Our server seemed surprised when David said, “Ooh, great!” The chorizo, having been sautéed after it was sliced, had a pleasant crispness to the bite. I skipped the pork, but everyone else said it was excellent.

The least-touched item on the table was the Tortilla Española, or Spanish omelet ($6.75), a potato/onion/egg frittata-like dish. This one was more egg than onion or potato, and on the bland side, which was unfortunate.

When we’re craving Spanish food but don’t feel like dining out, David will hit up Pata Negra, which is Costa Brava’s market, located just a few doors down, and stock up on all the great Spanish ingredients he needs to create tapas for us at home.