When I pulled up a stool at a tall table in Avenue 5 the other night, the first thing I noticed was how much the place had changed since I’d last been there (for dinner, with David, over four years ago). Gone were the white tablecloths, and in were the hip retro-style Edison bulbs. There was a casual-but-warm city feel to the place, one that feels welcoming to a hipster-loving foodie like me. 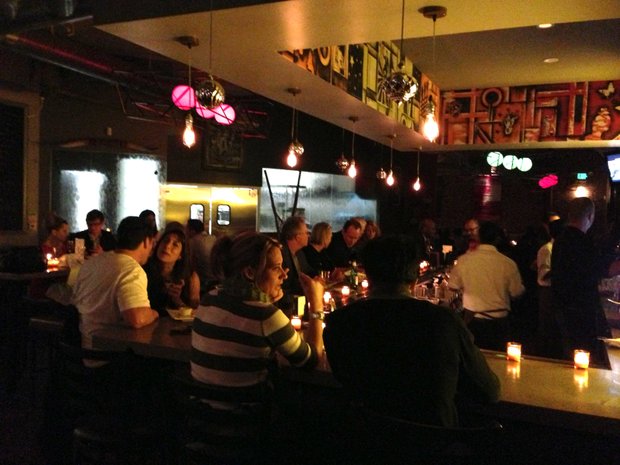 After a look around, I was expecting the menu to feature popular throwback items, such as deviled eggs and bacon-wrapped dates. Instead, to my surprise, the menu was peppered with distinct molecular gastronomy terms. The words, “vapor,” “powder,” and “balsamic caviar,” leapt from the page. This wasn’t just cooking — this was food science. My curiosity had been piqued.

I was there with a girlfriend. Neither of us cared for salmon in general, but after our server described a special — “maple cured salmon on blinis with dill marscapone and cucumbers” — we decided to be bold and try it out. We each managed one, and they were tasty (especially if you like salmon). Had there been something other than salmon on there, I would have gone for the third. So far, the only sign of chemistry was evidenced in the foam atop our blinis. 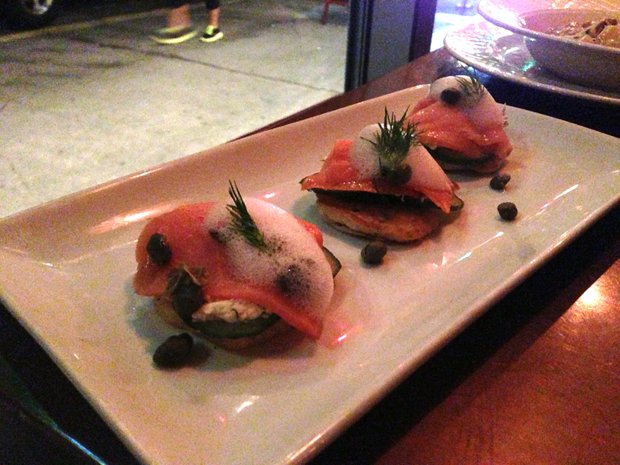 My favorite flavors of the evening arrived in the “mushroom ravioli with grapes” dish. I think the excellent combination of grapes in savory dishes is underused (one of my favorite pizzas features fontina, bacon, and champagne grapes). With the lightly sweet and savory combinations and a delectable richness that didn’t cross the “too heavy” line, the mushroom ravioli, with grilled corn and arugula, is one of those, “give me a piece of bread so I can sop up every bit of that sauce” deals. 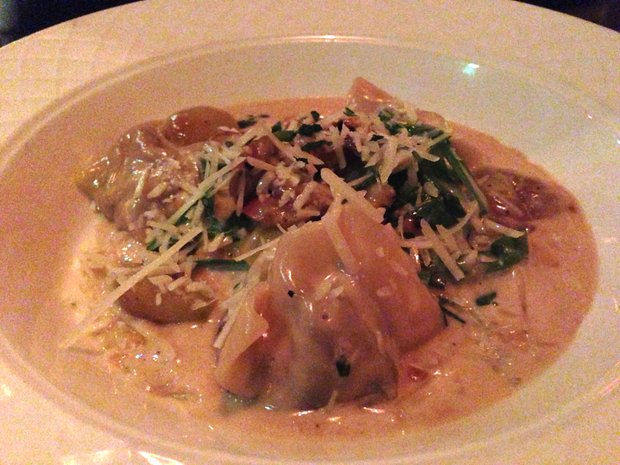 It’s no secret I’m not a fan of truffle oil. I cannot wait for this truffle-everywhere trend to end. But I’ve learned to accept that it is — at least for now — a staple on every menu, funking up everything from burgers and fries, to soup and steaks. I know it’s meant to be luxurious, but despite my love of mushrooms, I find the stuff too funky for my mouth. Still, because I had to see what the vapor was all about, I ordered the “forest vapor mushroom bisque,” with wild mushrooms and — le sigh — white truffle oil. Here’s how it works: the soup is served on a big plate and encircled with aromatic greens such as rosemary, sage, and thyme. Once it’s on the table, a server pours boiling hot water onto the plate around the bowl, and all the green, earthy aromas rise in the steam, so that you are breathing in the “forest” as you taste the mushroom soup. 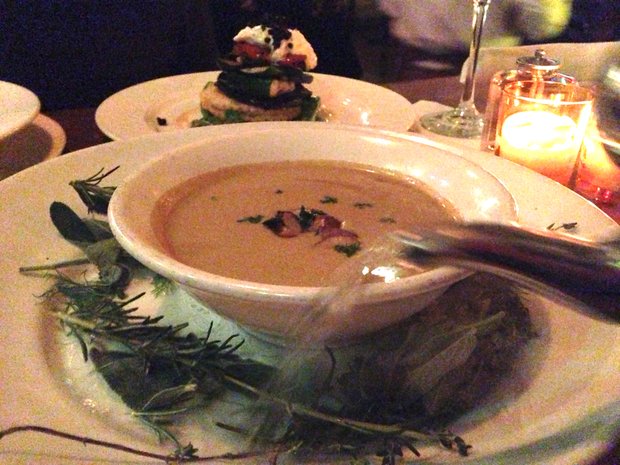 I’d been dying to try some real “caviar.” Not fish eggs, ew. I mean the chemistry kind — using the process of “spherification” to create tiny balls of gel-encased liquid. In the case of the “grilled vegetable tart” I ordered, the liquid would be balsamic vinegar. I’d heard how these little balls “burst” in the mouth, the casings a mere temporary jacket for the liquid inside. My understanding is that, for the interior of the balls to remain liquid, these things have to be served immediately. Otherwise, the gelification process continues, and instead of balls of liquid, you end up with balls of jelly. That was the case with the balsamic caviar that was served atop the burrata cheese, but this could have been the chef’s intention. They weren’t the exploding balls of balsamic vinegar I’d imagined, but they were lovely jelly balls of the sweet stuff, and they were a great compliment to the grilled veggies and the fresh crumbly pastry beneath. 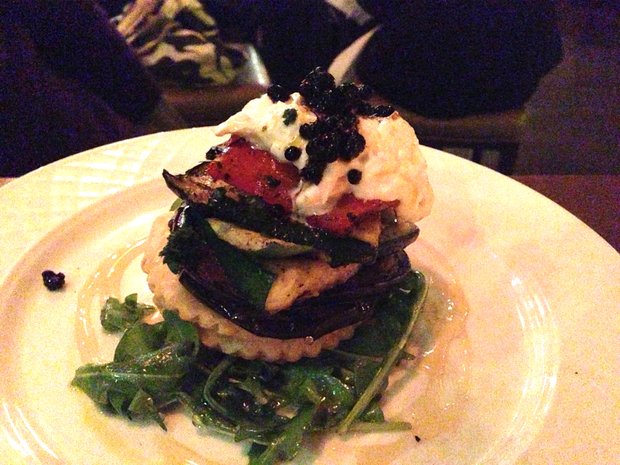 The menu changes regularly, to reflect “locally grown seasonal fare.” As with most restaurants, Avenue 5 is doing a New Year’s Eve menu ($65 for five courses), which contains a few molecular gastronomy bits, including clover caviar, eucalyptus foam, and brown butter powder. If you’ve never experienced the science end of the kitchen, this place is a great starter point. The menu has just enough “molecular” play for the curious, and plenty of excellent standards and fresh combinations for everyone else.