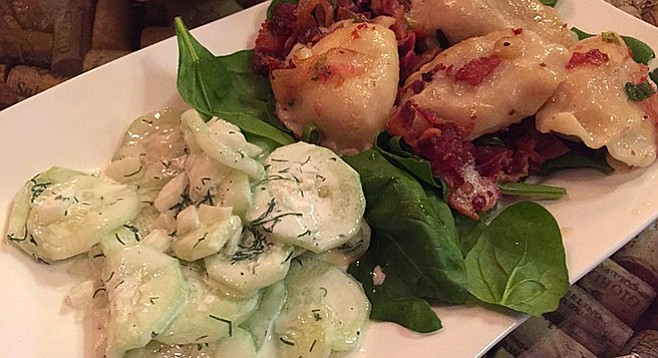 Our friend Mike recently brought David and me to Romeo and Julieta Wine Cafe, a little restaurant tucked away in Talmadge that I assumed, from its name, specialized in Italian food. The cozy interior has a Venetian flare, with brick arches, red and gold accents, and candle-like chandeliers. A regular since they opened two years ago, Mike knew to put down the wine list and ask our server (also one of the owners) for a recommendation. Apparently, new wines arrive more frequently than the family-owned restaurant’s menu is updated.

While he and David were busy selecting a smooth Tempranillo, I furrowed my brow at the food options. Schnitzel? Pierogis? Tamales? Hummus and naan? Borscht? I lifted my head, looked around the room in confusion, and then back to the menu to check that I hadn’t hallucinated. When he noticed my bafflement, Mike laughed and explained. “The chef, her husband,” he said, gesturing toward the woman who had helped us choose a bottle of wine, “He’s Polish.” David, a full-blooded Hungarian, was very happy to hear this — a Polish chef offered the promise of hard-to-find (at least outside of his own kitchen) home-cooked Eastern European cuisine. There were four of us, so we decided to order sharable items from the appetizer portion of the menu. Because I’d arrived with Italian in mind, the Caprese ($9.95) was my first request. It was a lovely preparation, with ripe and juicy tomatoes, soft and fresh mozzarella, shredded basil, salt and pepper so evenly applied we didn’t wish for more (or less), and a generous drizzle of the slightly sweet and tangy balsamic vinaigrette.

David was quick to order the Bacon Sautéed Pierogis ($9.95), served with a dill and yogurt cucumber salad. Asked to choose four fillings from eight options, he chose two Kraut-Mushroom and two Potato and Cheese. The dumplings were nice and doughy, and the salad served its refreshing purpose. David, a pierogi aficionado, was pleased.

We mixed it up with the sliders ($9.95), getting both pulled pork and the special schnitzel versions. I preferred the pulled pork, with sweet and spicy BBQ sauce that was as advertised. The coleslaw, comprising sautéed onions and cabbage, added a vinegar balance to the rest. The sweet potato fries that accompanied the sliders were mouthwateringly crispy on the outside, velvety on the inside, and expertly seasoned.

The schnitzel sliders were more like regular little burgers that had been fried crispy on the outside. I had a bite but, in the end, traded my portion for some more of the pulled pork.

The last item we tasted, but were all too full to finish, was the Romeo Baguette ($9.95). The same kind of French bread that came with the table was now cloaked in sautéed mushrooms, caramelized onions, diced tomatoes, and lots of melty mozzarella.

When Mike invited us out, I thought we were merely going to an Italian place for wine and cheese, but we ended up having a full-fledged global flavor parade. I love it when I’m surprised like that.