Making Up My Own Mind About Mozza 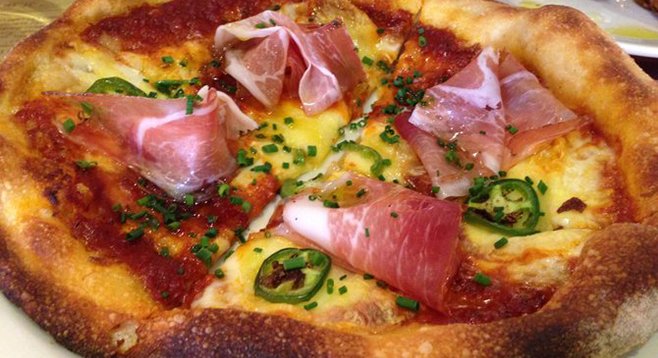 I’m not much of a Yelper, but when I was searching to verify the address for the new Pizzeria Mozza restaurant at the Headquarterstwo weeks after it opened, Yelp was the first site that popped up. I clicked because I was surprised at how low the ratings were, and I needed to know what the perceived problem was. I had been to Mario Batali’s Osteria Mozza in Los Angeles, and remembered it fondly. How could the same concept do so poorly here? There were some complaints about the prices, a few about the simplicity of the plates, but the overwhelming consensus among Yelpers was that the service was terrible. These findings squelched my urge to race over there in the first month. Weeks went by, and I had completely forgotten about my hankering to check out Mozza for myself until my foodie friends Hannah and Allard told me they loved the place so much that they dined there at least once a week. Because I trust my friends more than Yelp, I grabbed David and headed to Mozza for lunch.

We arrived at the tail end of lunchtime, so the restaurant was only about 20 percent occupied, and we were seated immediately. My concerns about the service were quickly quelled by our informed, attentive, and friendly server. It was a lovely summer afternoon, the perfect atmosphere for a refreshing cocktail. I ordered the Primavera Rosso, with rum, strawberry, mint, and Velvet Falernum, the staple liqueur in most Caribbean cocktails.

There were little breadsticks on the table, but they were hollow and tasteless (I remarked they were probably there for decoration instead of eating), which was fine, because we were ordering bread anyway, along with the meatball appetizer. The bread was soaked in olive oil, a little too much for my tastes, but the dough itself was delicious and well-textured, and the meatballs were so yummy that David and I cut the last one in half to make sure we each had our fair share, then we used the bread to sop up every bit of the marinara.

The bruschetta with labneh(spreadable cheese made from Greek yogurt), fresh peas, mint, and lemon — a mixture of garden-fresh flavors — momentarily transported me back to the Mediterranean.

Of course, we weren’t going to visit a pizzeria without sampling some pizza. And we chose wisely. The Pizza alla Benno comes with tomato, mozzarella, speck, pineapple, and jalapeño. But unlike the pineapple pizzas of my past, rather than little fibrous chunks, this pineapple was sliced and layered like the speck atop it, which gave it a satisfyingly chewy texture. All pineapple on pizzas should be prepared this way.

We had no room for dessert, but there’s plenty of time for that in the future, as we will most certainly be back to mangia more at Mozza.