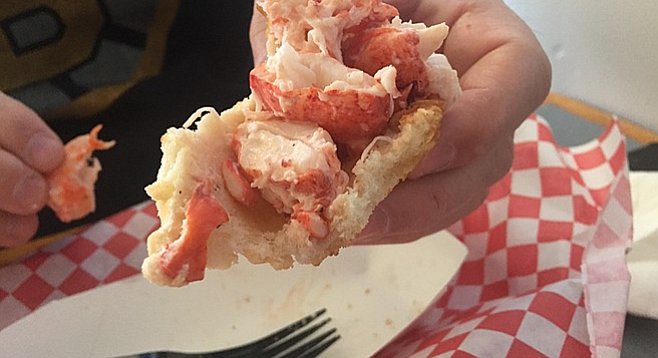 My Boston-bred man loves a good New England style lobster roll. So much so that during our biannual visit to Martha’s Vineyard for the past few years we’ve combed the island to find what David deems to be the top lobster rolls in each of three categories from among the dozens he’s tried.

Here in the Southwest, the closest he’s come to finding a roll to suit his tastes was in Encinitas, at Lobster West. So after he heard a new place opened in a neighboring ’hood run by a guy who refers to himself as Boston Pete, David couldn’t wait to try it out.

David, in his Bruins Neely shirt, pointing to the Motif Number 1 mural

David donned his Boston Bruins Cam Neely shirt — it’s important to have the right mindset when setting out to critically evaluate “lobstah” rolls. As we walked inside he immediately noted the mural painted on the wall. “That’sMotif Number 1, the most often painted building in America,” he said of the iconic red fishing shack. “It’s in Rockport. I’ve been there.” An auspicious beginning.

We stepped up to the counter. The lobster roll had good-sized pieces of knuckle and claw meat from a Maine lobster, served chilled on a griddled New England style, split-top hot dog bun that Pete has shipped in because he can’t find the right ones locally. It was listed as market-priced on the menu. On this day, that price was $17, a reasonable sum considering most of the rolls on the East Coast run $15 to $25.

David was happy with the quantity and quality of the lobster meat in his properly griddled bun. “See this?” he said, holding it up to me. “The minimal mayo allows the sweetness of the meat to shine through.” When asked by Pete himself, who came around to ask everyone how they were enjoying their meal, David said the only thing he would add was a touch of celery salt. Pete (who appreciated another Bostonian in his joint) said he’d have celery salt on the tables the next day to add it to the existing condiments on each table including vinegar, ketchup, mustard, salt, and pepper.

We laughed when the chicken parmesan sandwich ($9) was set on the table. The thing was gigantic. The filets were thin, breaded, and fried, with mozzarella and marinara. I liked the grated parmesan that was sprinkled over all of it. My preference would have been for more of both the melted mozzarella cheese and sauce. I did ask for a side of marinara, which I promptly emptied onto the chicken, under the bun.

Upon first lifting the sandwich, I worried that the bun was stale because of the firmness of the crust. But when I took the first bite, it was clear that it was soft and fresh and that the firmness was intended, probably to stand up to sauce. I saw this as more reason to pile it on.

I took the other half of the sandwich home to enjoy for lunch the next day (it held up deliciously), but David killed his roll in a handful of bites. As we left, he turned back to Pete, who was in the kitchen, and called out, “You’ll be seeing us again.”