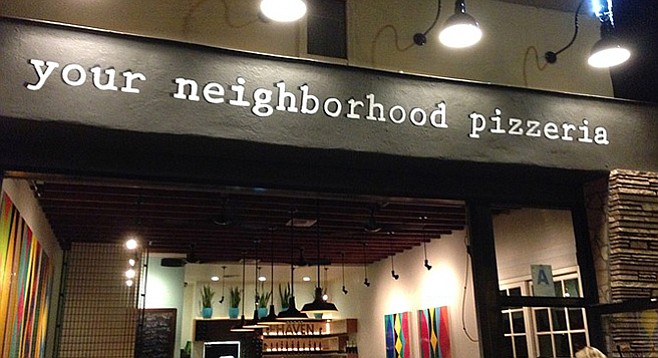 It’s casual. It’s comforting. And it won’t break the bank. This seems to be the restaurant of choice these days for residents of Kensington — the quaint, but pricey-homed neighborhood that boasts a library, a park, a live music venue, wine bars, coffee shops, and a classic but refurbished single screen cinema. And all this on only two blocks, along with a handful of restaurants.

It is here where Tracy Borkum (owner of culinary hits such as Cucina Urbana and Urban Kitchen Catering) established Kensington Grill. Ken Grill had a good run. It was one of my favorite restaurants in all of San Diego, but toward the end, it faltered. Service got slower and the food became less consistent. Borkum eventually shuttered KG and relaunched it as the loosely Nantucket-themed Fish Public. Unfortunately, FP never really caught on and was also recently closed. I don’t think the location is to blame, as evidenced by all the the occupied seats at the Haven, Ponce’s, Burger Lounge, and evenBleu Bohème, the last remaining, closer-to-upscale joint on the block.

I love most everything Borkum touches, but Fish Public did not fit the neighborhood. The interior, filled with shades of blue, was more cold than cozy. And though I tasted some great food from the kitchen, each time I had dinner at a table instead of the bar, the service was excruciatingly slow (not a good match for a place right next to a theater and club, as many patrons could be grabbing a bite before catching a show). If Borkum, who already has a small empire of successful Cucina Urbana-style restaurants, should choose to open up a Cucina-esque spot in Kensington, I’m confident it would thrive. She was well ahead of the trend when, in the wake of the crashing economy, the savvy restauranteur recognized an overall shift in the dining zeitgeist — from complex to comforting — and quickly transformed Laurel (a sophisticated, white-tablecloth, fancy-pants restaurant) into the first Cucina (and filled it with exposed wood, Edison bulbs, brown paper, and Chef Joe Magnanelli’s fresh modern take on your grandmother’s Italian cooking).

Just across the street from where Fish Public was is Burger Lounge, which replaced Just Fabulous, a luxurious dessert purveyor and restaurant. I remember a few choice dishes from Just Fabulous’s lunch menu, but the prices were high and the service was slow. I haven’t been inside Kensington’s Burger Lounge yet, but it appears to always be packed. Immediately adjacent to Borkum’s space is the Haven Pizzeria. This bustling pizza joint beside an empty restaurant is a familiar scene to anyone who’s spent time in South Park lately, where Buona Forchetta (an affordable, casual, family-oriented Italian place) opened across the street from Alchemy, a restaurant with higher prices and smaller portions. Alchemy is now closed. More often than not, I found myself standing in line to get a seat at Buona Forchetta and glancing across the street, noticing the empty Alchemy dining room and feeling bad about it, but not bad enough to cross the street and deal with meh service, barely sharable apps, and, frankly, what I knew would be a less convivial dining experience.

As with Buona Forchetta, Haven has good food — but so did Alchemy, so did Fish Public. It’s more than the food. It’s the atmosphere, the sense of casual ease. It seems to me that fewer people in Kensington are searching for “date night” and are instead looking for “every night.” A cocktail or bottle of wine and a cheese plate at Bleu Bohème is easy and elegant. Haven’s breadsticks, pasta, and pizza are easy and comforting. A burger or salad at Burger Lounge is easy and fast. Mexican food at Ponce’s? Muy fácil. Village Vino (which I’m looking forward to checking out more extensively, stay tuned), is seat yourself, order a glass, and share bites. Easy, easy, easy.

These aren’t the only restaurants on the block, but the common thread amongst all of them is clear: they’re casual, they’re comforting, and they won’t break the bank.