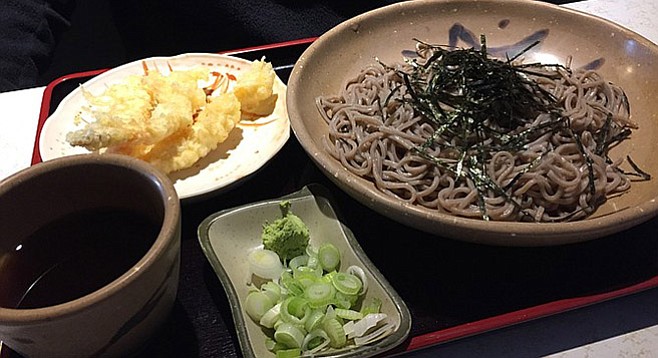 While on the way to Tofu House, I rarely pay any mind to the big red awning advertising “Japanese Noodles” across the street. Once every few months, David and I venture to try something new on the Asian-cuisine-rich strip of Convoy Street. He still swears he’s going to spend a year tasting his way through each of the hundred-something restaurants along San Diego’s Silk Road, but we always end up at our few favorites (Tofu House, Emerald, Yakyudori, Tajima, Dumpling Inn). Once in a Red Moon, we are fortunate enough to add another restaurant to our Convoy repertoire.

I admit we ended up atChopstix by default. We were hoping to check out the new expansion at Dumpling Inn, but it was not yet finished, and the wait for lunch was over an hour (hence their need for an expansion). Because I didn’t want to deal with re-parking the car in the congested industrial hood, I convinced David to walk around the corner and under the red awning. We couldn’t remember why this place had been off our radar. I think it was the Panda Express-esque look of the exterior, something that seemed to convey cafeteria-quality food. But, upon being greeted by a Japanese woman in both English and Japanese, taking our seat at a booth and picking up the menu, we immediately realized we’d made the quintessential novice error when dining on Convoy — judging a restaurant by its exterior.

We began by sharing a California roll for the palatable price of $3.75. David noted with disappointment that there was no cucumber, but I didn’t mind the omission. He found no faults with his Ten Zaru Soba ($8.25), a classic Japanese dish of chilled buckwheat noodles served with shrimp tempura. Though it was not served on a bamboo tray, David said it was as tasty as any of the soba dishes he’d had in Japan. Atop the noodles were strips of nori seaweed, and green onions and wasabi were served alongside with the dipping sauce.

I got the Chicken Katsudon ($6.95), with miso soup and a salad. The fried chicken cutlet was tender and juicy, and the egg and onions were doused in plenty of the sweet and savory broth that makes this dish what it is. I added a generous sprinkling of shichimi, the zingy and zesty seven-flavor spice mix I’ve become addicted to. Given the price, I was surprised it was such a huge portion. I ate half, and enjoyed the remainder the following day.

Cheap, casual, and authentic, Chopstix is now on the list of menus we’re looking forward to exploring further.