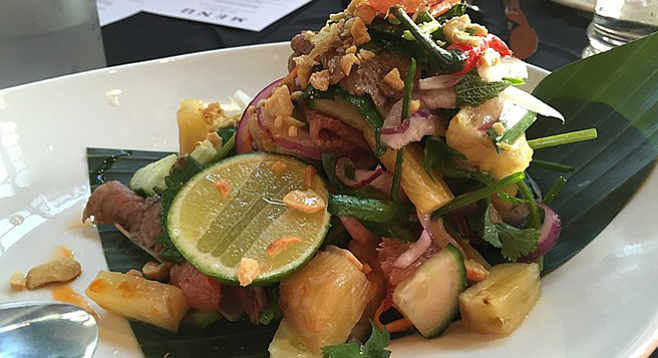 I’ve tasted my way around gỏi cuốn (salad rolls), phở (rice noodle soup), and lemongrass chicken; I’ve sampled “classic dishes” such as ca kho to (fish in a clay pot), and several versions of bánh mì (the French/Vietnamese sandwich mash-up). I thought I knew what Vietnamese cuisine was all about. But just as American food can’t be summed up by its burgers, there’s much more to Vietnamese cuisine than these few familiar dishes, and the best of it can now be found in the Gaslamp at Sovereign Kitchen & Bar.

Sovereign Kitchen & Bar, as seen from the sidewalk Spicy jerky with mango and pickled onion (a must-try) Alex Thao, the man behind Rama and a dozen other restaurants between San Diego, Los Angeles, and New York, has returned to town after a five-year hiatus, and he brought Michelin-starred, Iron Chef Vietnam Michael Bao Huynh with him.

I got a sneak preview of some of the dishes to grace the menu upon the restaurant’s opening this month, and it has forever changed the way I look at Vietnamese food. To kick off the evening, mixologist Jordan Slocum served up some original and refreshing cocktails, such as the Carrot & Ginger Mule (with rum and cardamom bitters) and the Cucumber & Basil Gin Collins.

Soon after we had a cocktail in hand, small “bar snacks” were set before us. One of my favorite bites of the evening was the first, spicy flank steak jerky with fresh mango and pickled onion. For days, I remembered popping each piece into my mouth and how the cool, fresh, fleshy mango and the tangy, slightly crunchy pickled onion contrasted and complemented the chewy, spicy meat.

Our first official “course” was Mountain Yam Soup with shrimp, fried leek, and cilantro (the only herb I don’t care for). I was horrified when the chef appeared from behind me, just in time to find me picking out the bits of cilantro. I smiled, he politely pretended he didn’t notice what I was doing, and then I surreptitiously turned my plate so as not to offend with the piled up bits of green on the side of the dish. Cilantro-picking faux pas aside, the soup was light and silky; the fried strips of leek added a savory bitterness to the delicate sweetness of the shrimp and starchy mountain yam.

Next up were Nem Nuong rolls, a twist on the classic fresh spring roll. These were cut into bite-sized Japanese maki-style pieces, and instead of a thin slice of pork or halved shrimp inside the rice paper, here were grilled pork “meatballs,” which were more like cubes, the meat both lean and flavorful. Each bite was finished with a dollop of peanut sauce with a generous drop of Sriracha in the middle. I could have eaten the entire tray and called it a meal and likely would have if I hadn’t known there were many more dishes to come.

The only thing I didn’t taste was the Spicy Beef Carpaccio Salad (with grapefruit, pineapple, cucumber, and chili). It was gorgeous to behold, but I took a little break during this course to sip my cocktail.

The prettiest presentation of the night was the Grilled Chili Prawn Salad. Here the shrimp, shaved coconut, green papaya, and toasted cashews were arranged in a coconut shell and decorated with colorful blossoms and greens. It was almost too pretty to eat.

Even though I had been warned, I still burned my hand on the steaming hot skillet in which the Sizzling Cuttlefish was served, but the minor mishap was soon forgotten. Cuttlefish, if you’re not familiar with the marine animal, is like an octopus, only all the tentacles and legs extend from its face, like a sort of shredded, prehensile nose. I know that probably doesn’t sound too appetizing, but all cut up and sautéed in this chef’s spicy jalapeño green sauce, it was plenty tasty.

Next we were served a whole Dungeness crab right from the crab’s own shell. The meat had been cooked with king mushrooms, garlic, chives, and glass noodles, a mélange of springy and chewy textures, a pleasant marriage of earth and ocean flavors.

We toggled from surf back to turf with the Grilled Beef Short Rib on Lemongrass Skewers (and a pickled peanut sauce). The meat had been pounded flat and wrapped around the skewer so you could eat it like a meat-pop or, as I did, unpeel the whole thing to enjoy with a knife and fork.

The intended “pièce de résistance” was the Snapper 3 Ways (baked, fried, and sweet & sour). This one was as entertaining to look at as it was to sample.

Our final pre-dessert course, the Grilled Cornish Hen, was a bit cumbersome. The sticky rice was surprisingly flavorful on its own, and the green papaya with peanuts was refreshing, but we were at a loss when it came to mixing our own spicy sauce with the ingredients provided, and much effort went into removing the inherently tiny bits of meat from the hen bones. This might work better for people who want something to do with their hands more than to put in their mouths.

Our perfect ending came in the form of a Coconut Yucca Waffle (coconut, sweet corn, and caramel ice cream). This soft, warm, and not-too-sweet delicacy was…let’s put it this way: once the morsels had been cleared away, fingers were put to plates.

Though Sovereign is on the “fine dining” side of the spectrum, the casual décor and sharable nature of the plates make the space comfortable and convivial. For an even more casual and familiar Vietnamese food experience, there is the Sovereign Food Shop right next door, where you can sample this top chef’s versions of bánh mì, phở, and other classics such as bowls (meats or tofu with rice/vermicelli noodle/salad), noodles, salad, and rolls.