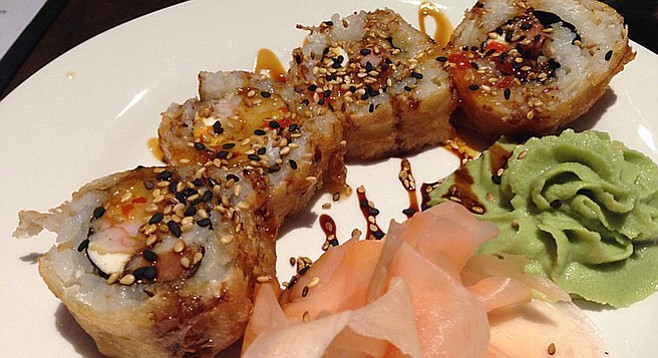 We bustling foodies tend to be so focused on what’s new and hip that it’s all too easy to forget the unassuming time-honored restaurants that have been steadily serving hungry San Diegans for generations. One such restaurant is Bully’s East Prime Bistro Sports Bar, the Mission Valley joint that first opened in 1971. Rather than the cold, open, sparse, screen-filled rooms I associate with the term “sports bar,” Bully’s is warm and inviting; intimate tables with red vinyl booths are separated by dark wood panels, and each table is illuminated with a low-hanging light. The screens are discreetly tucked away on either side of the bar. The most prominent screens for sports-lovers are in an adjoining room, where long tables and chairs are set up for larger parties.

I used to go to Bully’s on occasion with a friend and her mother, but that had been years ago. The place was mostly off my radar until my friend Kimberly, the queen of no pretension, insisted a group of us hit it up. Kimberly is not a hipster, meaning she isn’t like another faction of my friends who seem to enjoy other mainstays such as Albie’s Beef Inn or Imperial House more for the kitsch than for the food. (It was also Kimberly who brought me to Piatti’s. She has a knack for seeing through hype and gravitating toward places she just likes.)

I could feel the charm from the moment we were greeted by the hostess at the family-owned restaurant. The staff is friendly across the board, from the bartender who served me a no-frills Manhattan to our server who answered every question and promptly responded to requests with a genuine smile. I was surprised to see a few bold fusions on the appetizer menu, things like the Trifecta Roll ($9), a sushi roll with prime rib, shrimp, and cream cheese, tempura fried and served with sweet chile sauce. Of course, we had to try it. Strange as it was to have a steakhouse-style sushi roll, the flavors and textures all worked well together, and everyone who had a piece smiled and nodded as they chewed, even my usual sushi-purist husband.

It’s on the appetizer portion of the menu that Bully’s seems to push beyond its 70s-era mandate, mostly with monthly specials, some recent examples of which are the butternut squash ravioli with mushrooms, sage, and brown butter ($9); prosciutto and goat cheese pizza ($9); and pierogies with sauerkraut, spiced apples, and sour cream ($8). We ended up ordering the baked brie with toasted almonds, apples, and cider cream, served with toasted baguette ($10). This was just damn good.

The primary fare is meat and seafood heavy, and covers the gamut of classic steakhouse preparations, such as lobster tail with drawn butter ($40), a whole or half BBQ chicken ($22/$17), burgers, sandwiches, and of course, steaks. I opted for the 8-ounce filet mignon ($31). For my two sides, I chose the baked potato and green beans with toasted almonds. The steak was prepared to my liking, charred on the outside, a reddish pink medium inside. I was equally pleased with my sides — the green beans required no additional seasoning at the table, and my potato skin had a pleasurable crackle to it.

It wasn’t until later, when I checked out their web site, that I learned Chef Luis Martinez (fairly new to Bully’s East) is a graduate of the Culinary Institute of America and spent some time cooking in Spain, but grew up right here in Alpine. I found it interesting that he uses the word “simple” when explaining his food philosophy, as that is the word that came to mind as I was sampling his food. By simple, Martinez means he seeks to maintain the original flavors of his ingredients. There is comfort to simple, and it takes great experience and effort to create dishes that are both simple and delicious. Thanks to my friend Kimberly, Bully’s East is most definitely back on my radar.