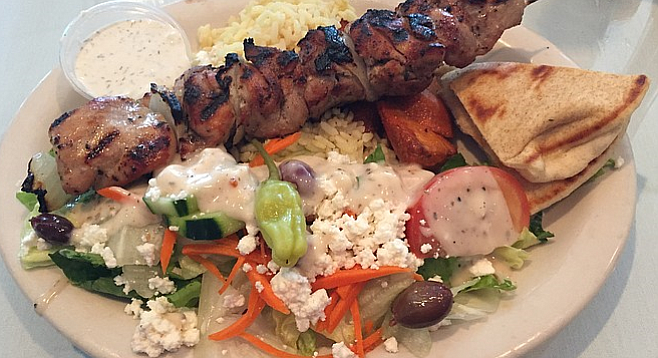 The first time David and I had lunch at Troy’s Greek Restaurant, we didn’t love it. We didn’t hate it either. The lunch specials were reasonable. I got a plentiful plate of chicken souvlaki (chicken kabob) with Greek salad, rice pilaf, tzatziki, and pita bread for $8.95. David ordered the beef version for the same price. He wasn’t disappointed — that would be too strong a word for it. It was more like he was unimpressed. He thought the tzatziki needed garlic because it was too bland as it was. I had to agree, though my suggestion would have been for more cucumber or dill. We enjoyed the char and seasoning of our respective meats, but we agreed the rice and carrots were unremarkable.

Pastitsio, with the thickest béchamel

Gyro salad, with a generous portion of meat

As we were paying up, we figured it couldn’t hurt to fill in our birthdays and email addresses on the little form that was provided. I’m glad we did, because it was the birthday coupons we received via email months later that brought us back. We figured, hey, free meal (of up to $10 with the purchase of another entrée of $10 or more), let’s give this place another try.

It was on our second visit that we took more time to appreciate the décor, the murals on the wall, the white tablecloths, and the flowers on each table. I went for the gyro this time and asked to upgrade the side salad to the Greek salad in lieu of fries. I really dig the gyro meat at Troy’s. It’s nice and lean, with crisped edges and a tender and juicy center from having been slow-cooked. It’s the classic mixture of lamb and beef, and it’s seasoned so well I ended up eating much of it with a fork, just by itself. As far as gyros go, I would prefer for this one to have had more stuff in it, such as cucumber slices and feta, but with the salad I ordered I was able to build my own ideal version.

David started his lunch with a cup of avgolemono, or lemon rice soup. It was tart and savory, a new and slightly odd flavor combination for me, but David enjoyed it enough to clean his plate with a piece of pita. For his entrée, he went with the Pastitsio ($12.95), a baked casserole with macaroni and sautéed ground beef topped with béchamel sauce. Only this “sauce” was more like creamy dough. David would have preferred more of the bottom and less of the top, but nevertheless it was packed with flavor and so rich that he ended up bringing the other half home in a box to enjoy later.

After being lured back a few times with the promise of a good discount and experiencing several satisfying lunches with friendly service and a quaint, “on the nicer side” Greek restaurant, we are now sort-of regulars. We even have a go-to order, the gyro salad ($10.95), which is a large Greek salad topped with that tasty gyro meat, plus a side of pita. With all these fixings, I’m able to build a bunch of mini gyros, just the way I like them.