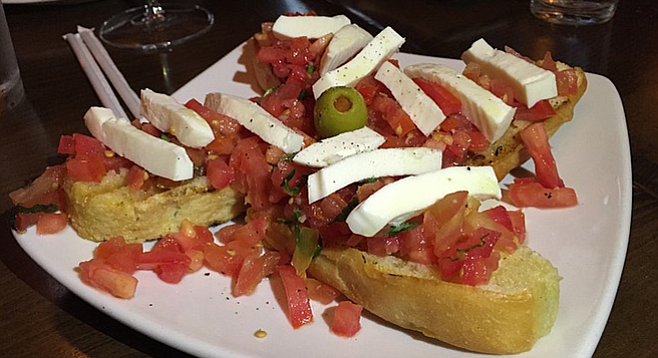 Because I have two sisters who live in North County (one in Poway, the other in San Marcos), David and I occasionally trek north for dinner. The Barrel Room in Rancho Bernardo has proven itself to be a good gathering spot for our group of eight (four sisters + four husbands). The service is fast and friendly, the prices are reasonable (entrées averaging around $20), and the appetizers are huge and sharable. It’s dark and cozy, comfortable, and candlelit.

Chicken Parmesan, decent but not delightful

Seabass with risotto, a recommended order

My only complaint is how loud it is. Forget about hearing the person at the other end of the table — I had difficulty hearing my sister, who was seated right across from me, over the din.

Of the appetizers I’ve sampled, I’d recommend the Bruschetta Caprese ($10) and the Sweet & Salty, which are bacon-wrapped dates ($10). The bruschetta is served on spongy, fresh focaccia bread with a generous helping of ripe Roma tomatoes, basil, garlic, and mozzarella and seasoned with salt, pepper, and a drizzle of olive oil. A hint of balsamic reduction adds a welcome, slightly sweet and vinegary note.

The table-favorite on our last visit were the bacon-wrapped date “lollipops,” served with wine mustard. Each one had its own stick, a great encouragement for diners to set down the fork and knife and pop the entire thing into their mouths as intended. That way, the bacon and date — similarly chewy, but exact opposites on the flavor spectrum, one salty, the other sweet — showcase and complement one another.

On our most recent visit I ordered the Chicken Parmesan ($18), which is breaded in panko crumbs and slathered in marinara and mozzarella. It’s served with capellini (angel hair pasta) that is tossed with a garlic cream sauce. I found the cream sauce an odd choice for the pasta, as the marinara from the chicken is more than enough to cover it. The chicken itself was fine, your standard fried cutlet in marinara, but the pasta was overcooked to the point of being mushy.

I kicked myself for not ordering the entrée I’d enjoyed on our prior visit, the Pistachio Crusted Sea Bass ($25). I received a lovely filet that was nicely seared on the outside and flaky and moist within. The cipollini onion risotto had been perfectly prepared, smooth and creamy, but each grain had retained its bite and the romesco sauce that pooled around it was rich and savory.

Between the appetizers and entrées, we never seem to have room for dessert. But it’s a treat enough for all of us sisters to get a night out together. We’re starting to make a habit of it.