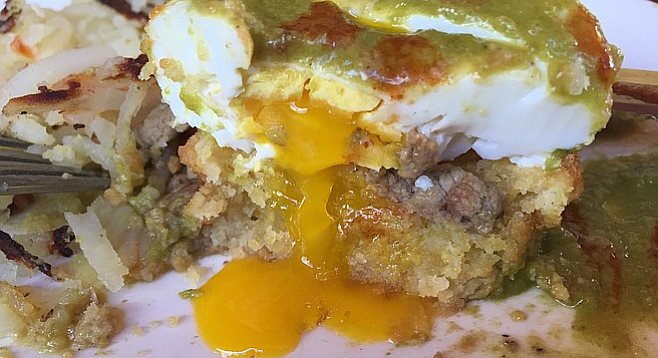 Picture menus get a bad rap, but more and more I’m finding them invaluable. For example, had there not been a giant, colorful, foodporn-y image of the Border Benedict on the glossy menu at the Broken Yolk Café, I would have missed out on what turned out to be one of my most satisfying breakfast experiences.

That familiar and very SoCal logo Pictured plates are probably the most popular

But let me back up a bit. Sometimes I’m late to the party. Like, really late. I’ve been seeing that familiar logo — with the palm tree and the egg-like sun over a yolk-like ocean reflection — since around the time I started walking. Somehow, despite living in SoCal for most of my lifetime, I’d never stumbled into one of Broken Yolk’s dozen-or-so locations.

It was mid-morning on a Saturday, and David and I wanted to grab brunch before running some errands, the first of which would be at Bed, Bath, and Beyond in Mission Valley. It was David who suggested, for ease, that we try out the breakfast-centric restaurant on the other side of the parking lot.

This brings me back to the menu. I was almost settled on ordering something basic, such as a burrito or simple omelet. Then I saw the photo, and my decision was immediate and firm. I ordered the Border Benedict on sight, for $13.45.

I was pleased to see that the plate looked even better than the photo (usually it’s the other way around). My poached eggs and carne asada rested atop sweet corn cakes, and the whole shebang was doused in a savory poblano sauce. It hadn’t occurred to me to expect a perfectly poached egg from a place named for just that, so I was disproportionately delighted when my egg turned out to be exactly how I requested, a perfect medium poach.

David ordered the 27 Mile South, a giant omelet with beef chorizo, avocado, tomatoes, and onions, topped with house-made salsa. I was so into my dish, I declined a bite, but he seemed to like it fine — an understatement, of course, seeing as he cleaned his plate.

This time, Broken Yolk was a convenience, an easy place to stop and eat on our way to where we needed to go. From now on it’ll be a destination.