Food as Entertainment at Hash House

For me, Hash House in Hillcrest has always been a scene-y brunch spot for the not-hungover-so-much-as-still-drunk group of friends. There’s a somewhat-annoying, but “fun to mingle in if you know a bunch of people in the hood” line out the door, but once you get inside and order a breakfast cocktail and start nibbling on your huge, complimentary, honey-drizzled, biscuit (which will help soak up the alcohol), you can slowly begin easing your way into the day. 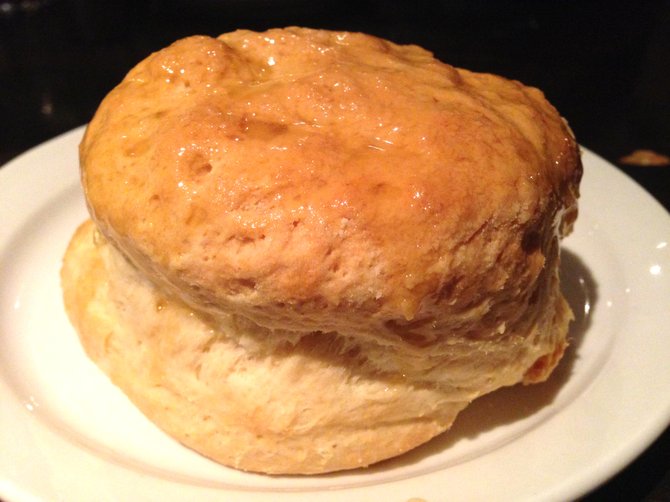 It used to be a scene for dinner as well, but when I stopped in one recent Wednesday evening, the place was so empty I hesitated outside the door, wondering if they were open. This is how we ended up there: David and I had been at an event downtown, and escaped the Gaslamp via Fifth Street, which leads right into Hillcrest. We chose to put our dinner plans in the hands of fate, trusting that divine providence would free up a parking space in front of our as-of-yet unknown — but clearly intended — venue for the evening.

“There’s a spot right here, do I take it?” I said, as I slowed to a stop. David hesitated, so I added, “Tractor Room is only a block up the street. And, like, four other restaurants. What do you think?”

“The spot is there,” David said definitively. “Our fate is sealed. We are going to Hash House.” 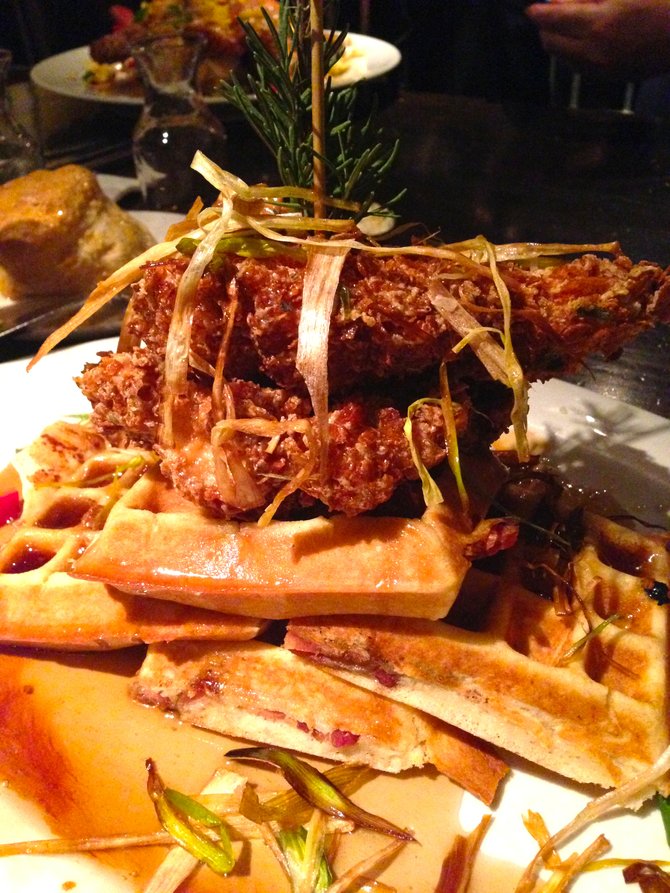 I couldn’t remember the last time I’d been inside. Years. But I did remember they had a chicken and waffle dish, and I’d had a hankering for the salty/sweet/savory/soft/crispy combo. Still, it’s a commitment to order anything at Hash House, craving or no, because each dish served is the equivalent of four large meals. That meant I’d be eating chicken and waffles for the rest of the week. I pondered this for a moment, decided it wasn’t necessarily a bad thing, and followed my man to the door.

My first impression inside was that the place felt sad and alone. Quiet, no perceptible music, no din of jovial diners — pretty much the opposite of the brunch scene. I was happy to see the chicken and waffle dish still on the menu. David took his time to choose his meal-for-the-week, and in that time, as I sat there in the awkward silence, I considered aborting our mission. But then, our server brought us those biscuits. They were as big as I remembered, drizzled with honey, and served with fresh butter. I sliced myself a bite and settled into my seat. Just then, the two women beside us, who had been quietly staring at their phones since we’d arrived, received their entrees, and everyone in the restaurant (us, the women, and a few guys at one other table) perked up. 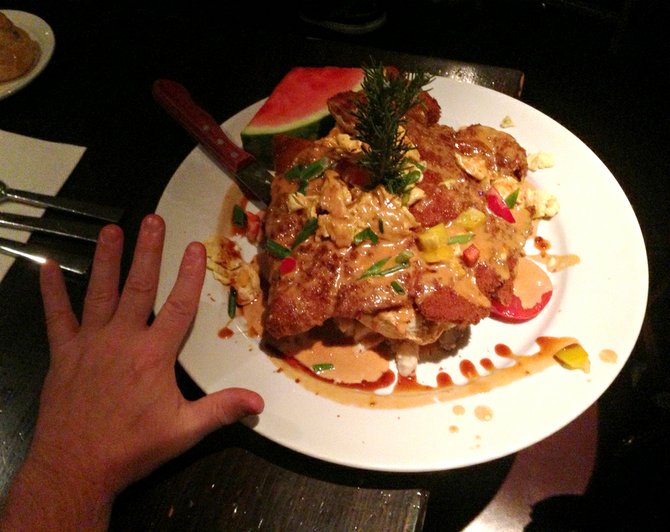 “It’s just absurd, isn’t it,” I said to David. He nodded. “Like, those are the kind of plates you expect to be set in the middle of a table of 8 people at a family supper.” The women were reacting the way everyone does: laughter, comments of “Oh my heavens,” and preemptory requests for to-go boxes. I wondered if the servers ever got tired of hearing the same histrionics over and over as diners want to make it clear that they “could never eat all of that,” and, “What am I, on an episode of Man Vs. Food?” 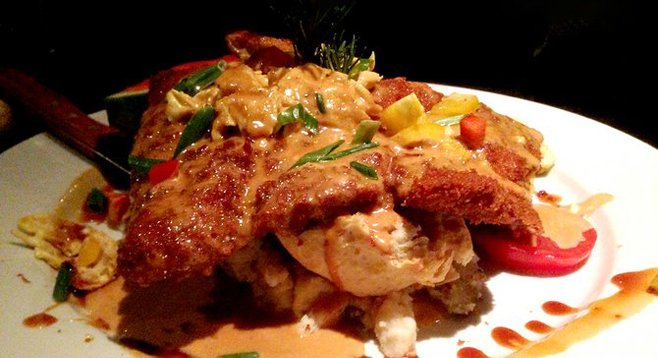 I tried not to react when my platter was set in front of me. But it was really, really hard. It’s just such an absurd amount of food. I stifled the wise-cracks rising within me and simply said, “Thank you, this is hilarious.” My sage-fried chicken and waffles were served in a tower with a stake of rosemary driven through its heart. I’d forgotten that these waffles had bacon inside, making my meal in essence, a direct challenge to the very idea of healthy eating.

Regarding the quality, I was pleased to take my first bite and realize the chicken was not overcooked, but juicy and tender inside, and nice and crisp outside. The fried leeks added yet another exciting dimension of flavor. 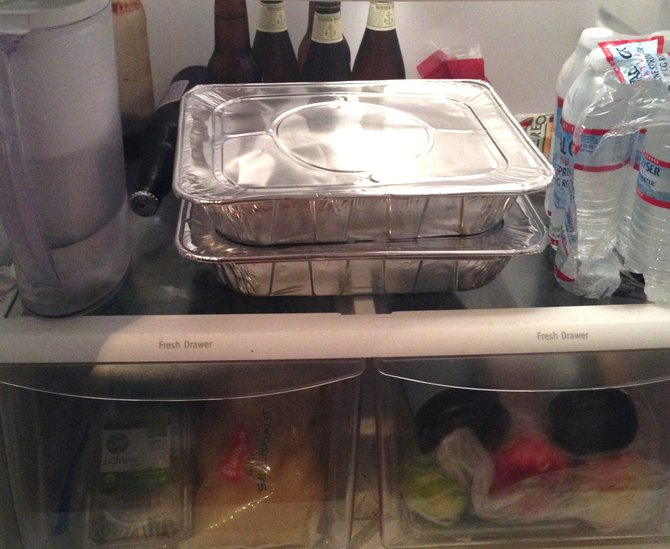 Our take-home bins, taking up a whole lot of space in the fridge.

David’s plate, although I hadn’t thought it possible, was even bigger than mine. He got one of the “breakfast for dinner” items, a benedict that wasn’t quite a benedict, because instead of being poached, the eggs were scrambled: “crispy hand-hammered pork tenderloin with market yellow tomato, spinach, bar-b-cue cream” beneath the scrambled eggs. “I have never seen a tenderloin this gigantic,” David mused about his Frisbee-sized schnitzel. “I didn’t know you could hammer it out that much.”

He seemed pleased with his dish — I couldn’t bring myself to taste it, not yet. “That things going to be living in the house for a while, trust me, I’ll get my opportunity,” I said, after David insisted I give it a try.

Instead of boxes, we received aluminum bins for our leftovers, similar to those that might contain a party’s worth of take-out enchiladas. “Guess what’s for breakfast tomorrow?” I joked as David placed the bins in the trunk. “And lunch? And dinner?”

“You have to admit it though, that’s a damn good deal,” David said. “My dish was under 20 bucks. And I’ll get at least five meals out of that.”