Though my man and I dine out frequently, we tend to save the super-high-end foodie adventures for special occasions, such as David’s birthday. Last year, we splurged for what ultimately turned out to be a rather homely experience at A.R. Valentien. This year, I was willing to go the extra mile to ensure an incredible, memorable gourmand adventure. So I booked us a table at Addison Del Mar. I’m embarrassed to admit that I had not only never been to, but had also never heard of the Grand Del Mar, which, if its long, extravagant, tree-lined driveway entrance is any indication, is a tad pricier than a room you might find in Mission Valley. But I had, of course, heard of Addison. I knew of Chef William Bradley, and had seen photos of his artistic, Japanese- and French-inspired creations, food intended to be as beautiful to look at as to taste, and I was just as excited as the birthday boy to experience it firsthand.

As with last year, our good friends Mia and Kerry joined us for David’s fancy birthday feast. Two days before the big meal, someone at Addison called to inform us of the dress code, which she described as “smart/casual.” Basically, men can’t wear jeans or open-toed shoes — jackets and ties are preferred, but not required. Fortunately for the ladies, the code is not as specific. Between the audible lines, I heard, “use your best judgment, but don’t raise any brows.” Fair enough.

We were seated at a round table that could have comfortably sat eight. Our server greeted us and explained our options — the regular menu, chef’s tasting menus of 6 or 8 courses, or “Le Menu Gourmand,” a ten-course chef’s selection for “culinary enthusiasts.” When he walked away to let us discuss our options, we didn’t take long to reach a unanimous decision. You don’t drive all the way to Disneyland just to go on one ride. 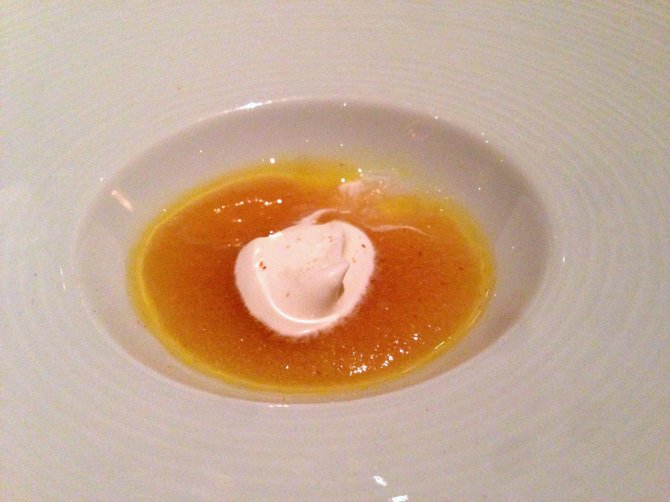 “Le Menu Gourmand,” I proclaimed upon our server’s return to the table. “With wine pairings.” Then, after he left, with an excited smile on his friendly face, I added, “Balls to the wall, people. We’re in this for the long haul.” It felt particularly wrong and exhilarating to speak crassly in such fancy surroundings. The first item to arrive was the amuse-bouche — holiday-spiced pureed pear, with a dollop of crème fraiche. The intense combination of sugar, spice, and salt was soothed by the silky cream. 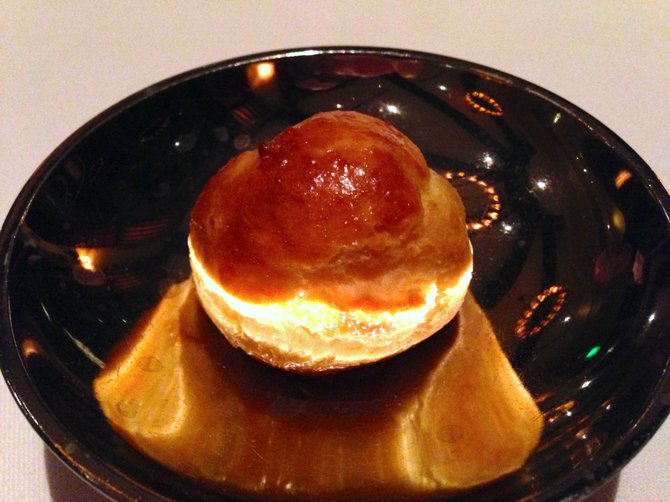 Our next bite was a gougère, a traditional French cheese puff, but this was not like any cheese puff I’d had before. “Normally, we would not instruct you how to eat something,” our server said, “But for this, we strongly recommend you pop the whole thing in your mouth and eat it as one bite.” Unlike most gougères, including the ones David makes at home, instead of a pocket of air, this one contained a surprise. When I popped it in my mouth and bit down, the liquid cheese center was released. When we finished our gougères, smiles were exchanged all around — an auspicious beginning.

Before long, two silver dishes with fresh grissini (Italian breadsticks) were placed on either side of the table. Sea salt and lemon zest tickled our tongues when we bit into them. After the breadsticks, the final type of bread, a roll I failed to photograph, was served, alongside locally churned butter. As tasty as it was, we were quick to reject the offerings of more bread, as we were yet to have our first official course. 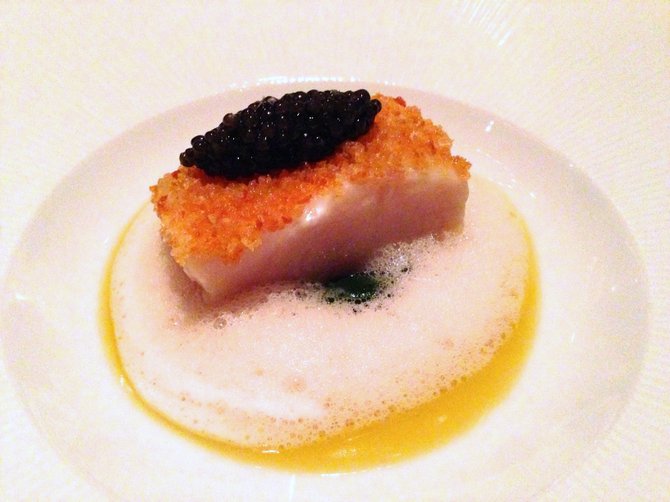 No one at the table had any allergies, but prior to receiving the first course, which I knew would contain oysters, I’d hinted at my aversion to the slippery bivalves. “I can just give mine to the table, I’m sure they’d be very happy,” I said, but our server insisted they would be able to substitute this one course for me, and after a moment of resistance (it’s uncool to expect or request substitutes after you enter into a “trust the chef” tasting), I finally accepted the kind offer. So it was that my meal officially began with white sturgeon confit, with puréed spinach, caviar, and vermouth. It was a little on the fishy side for me – I’m not a fan of caviar — so I ended up sharing it with the table after all, each of whom were very grateful for the generous scoop of caviar atop the fine piece of fish.

As for their own dishes, the Kumamoto oysters were pure decadence. Atop the oysters was a horseradish mousseline, fine black caviar, lemon, and, as if to punctuate its opulence, gold. 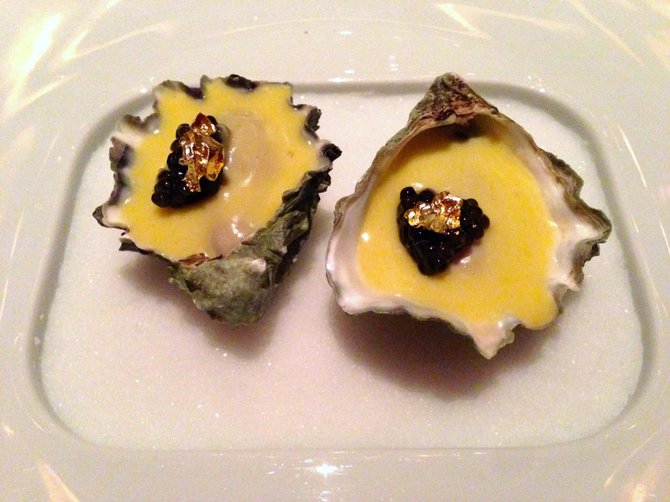 Oysters with caviar and GOLD

Next came the caramelized codfish with charred scallions and toasted kale. This was placed before us in an elegant, clear glass bowl, into which delicious dashi was then poured at the table. Dashi is a classic, Japanese, bonito-based fish stock, and this one was among the most delectable I’ve tasted – warm, well-rounded umami flavor. We each made good use of the spoons provided. 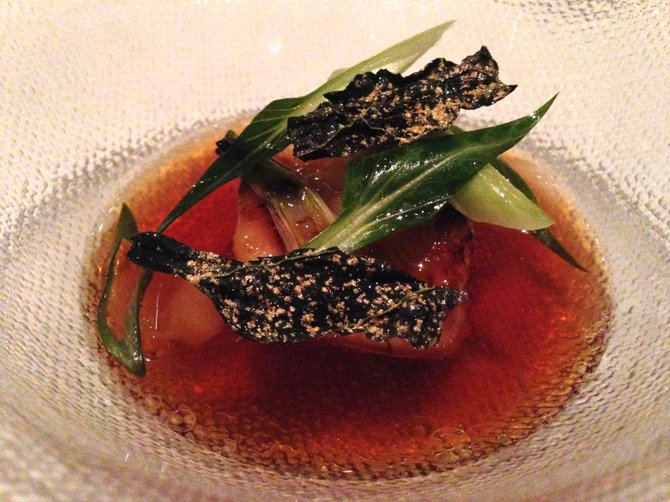 Because it’s an oilier fish, often with a distinct fishy flavor, salmon and I haven’t been close friends. The only one I’ve ever liked was labeled Copper River. But this one, a wild Alaskan King salmon, served with beets, a slice of green apple, and salmon roe, was clean and lightly sweet, minus the low-tide twinge that usually makes me turn away from this particular fish. After the delight of this lovely bite, should I again come across “wild Alaskan salmon” on a menu, I now feel emboldened to give it a try. I couldn’t help but wonder if my affinity for wild Alaskan salmon had anything to do with the fact that I lived in Alaska for a few years as a young child, and wild salmon was often served at home, though my mother called it “chicken” so that her daughters would eat it. 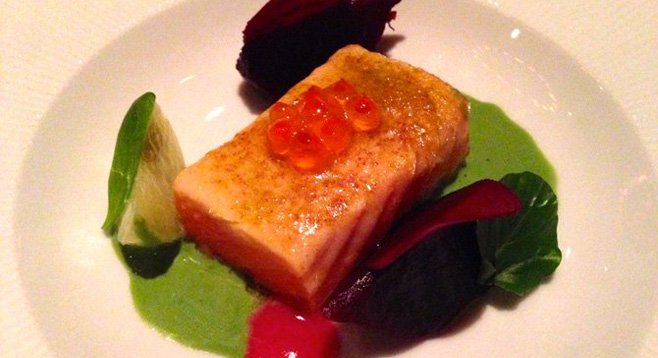 The next course (the fourth, for those of you keeping track), was earthy and rich. As with oysters and salmon, truffle is usually something I usually try to sidestep. Comically, it seemed that our entire meal was destined to be crafted from the few foods to which I have an aversion. Thinly shaved black truffles topped a tower comprising a parmesan cake, coddled farm egg, and pressed pork. It seems that in recent years truffles have become the industry standard for “fancy,” making it the ubiquitous, unwanted addition to all my classic favorites. But here, used intentionally to complement its earthy companion flavors, I finally got what all the truffle fuss has been about. And like the salmon before, this dish elicited moans from around the table. 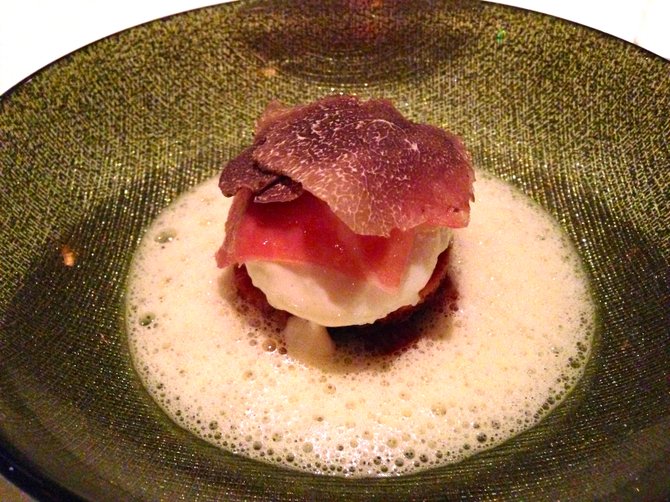 Continuing with the earth theme that followed the wave of ocean flavors, the fifth course was veal with broccoli, caramelized garlic and parmesan, topped with a slice of cabbage. As with the spinach beneath my sturgeon, the broccoli here was a fine velvety purée. 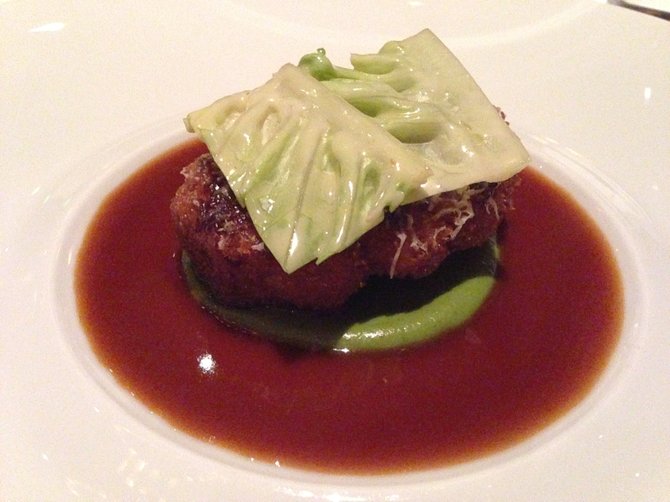 By course six, we couldn’t believe there was still more food to come. This is the course where I began to slow down. Coffee-roasted canard was served with a side of koshihikari rice (a Japanese short grain), which contained duck confit and candied peanuts. The duck had the texture and flavor of filet mignon, and the coffee and sweet peanut did not mask but rather enhanced the taste of the meat. 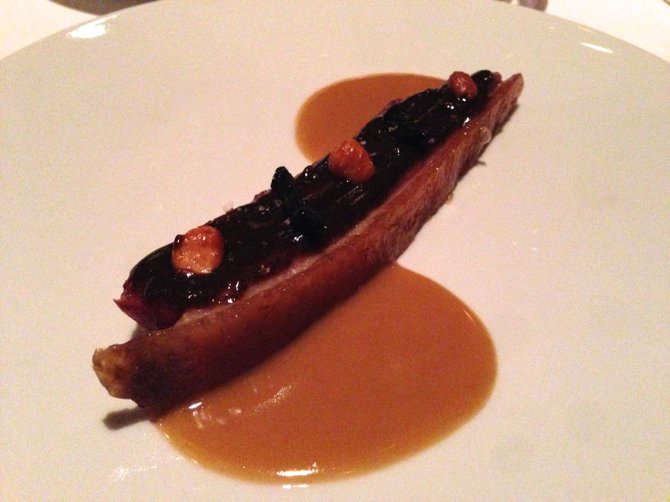 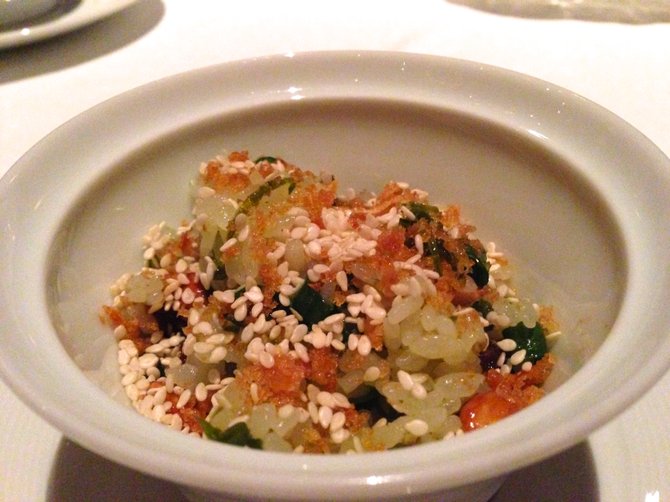 A course of artisanal cheeses served as a transition from savories to sweets. Five cheeses were carved tableside, accompanied by house-made crackers. 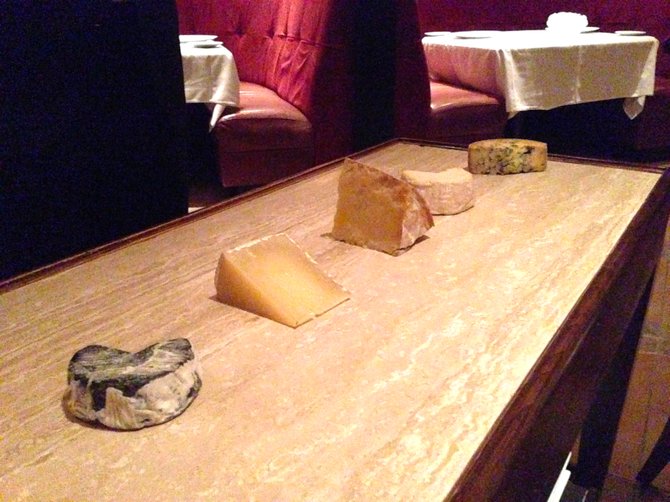 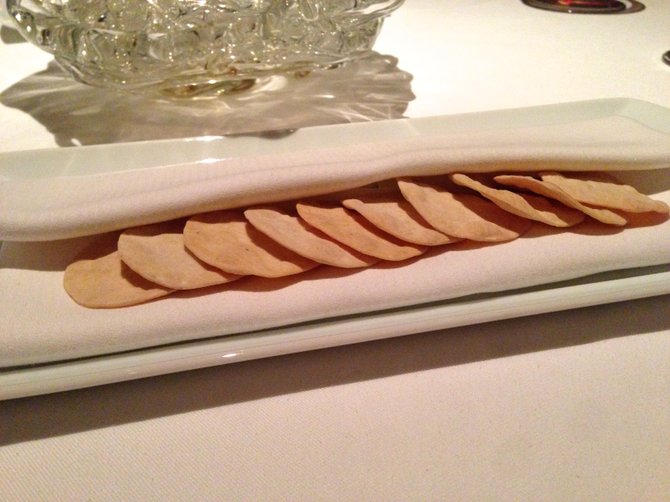 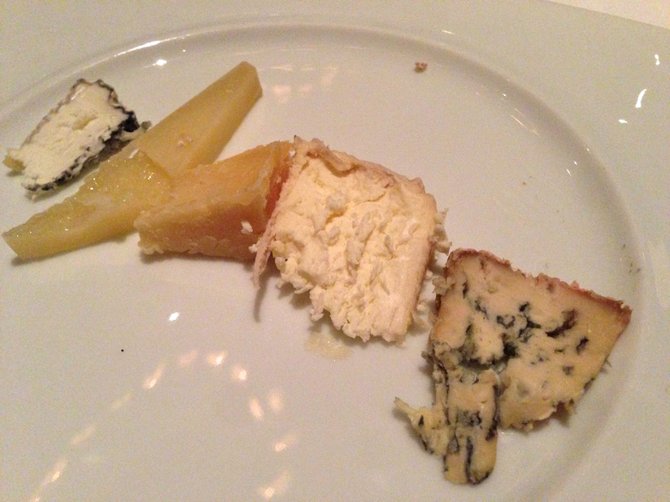 Our sherbet, more than a palate cleanser, was cranberry and orange. 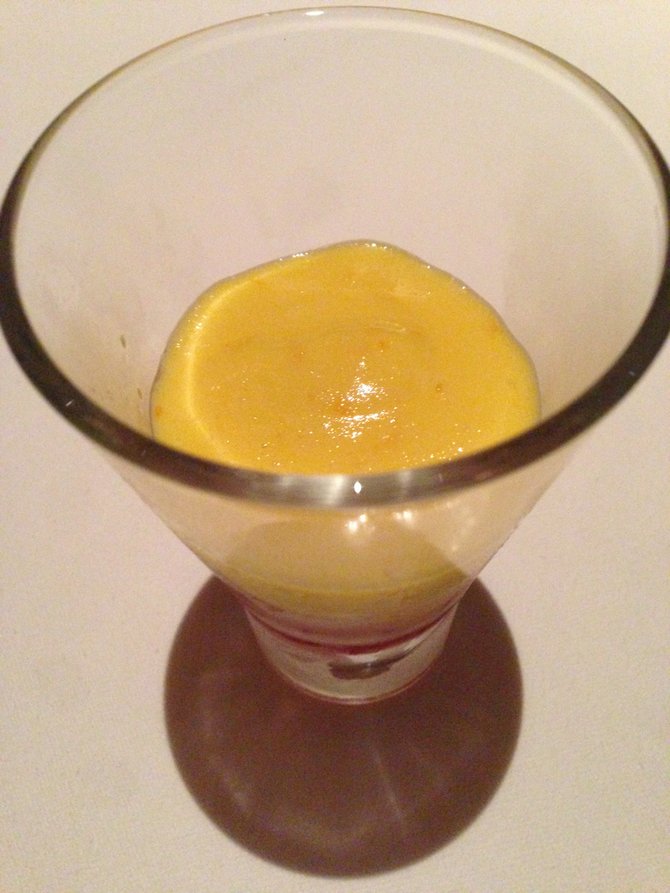 The meringue atop the Meyer lemon petite tartlet had been singed, giving this delectable bite a tart, sweet, and rich lemony toasted marshmallow quality. 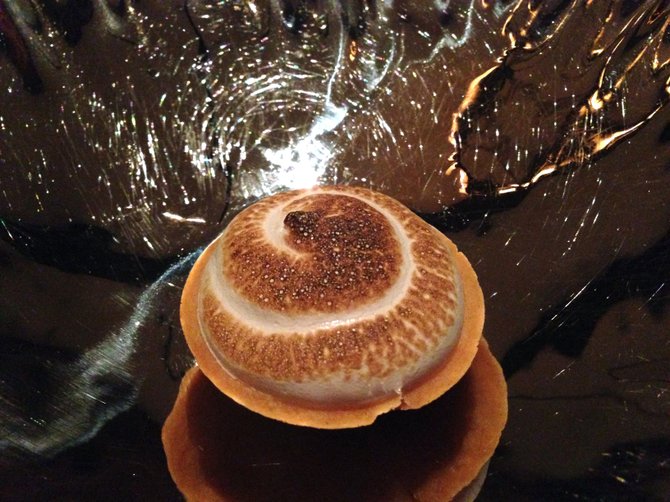 And, this is when I hit a wall. No more sipping, no more biting, I was done. But my culinary comrades soldiered on to enjoy the opera gateau with caramelized white chocolate (deceptively light, as David described it). 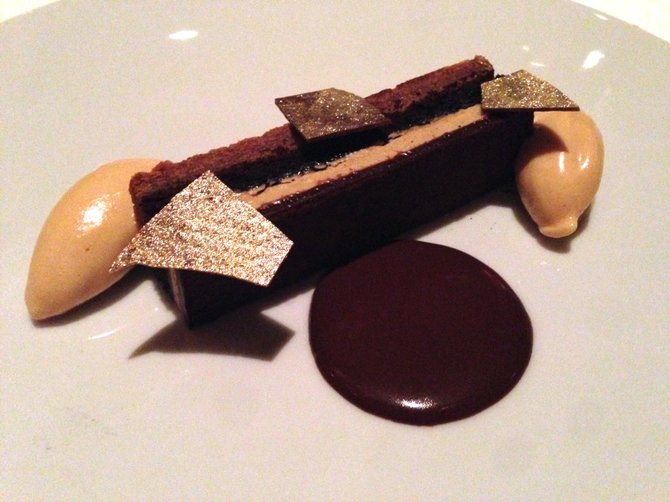 And though that was ten, there was still one more bite to come — the final gift to the table was a macaron each. As with the opera cake, I had mine wrapped. To our poodle bags (this place was too upscale for me to call them doggy), the restaurant added a handful of individually wrapped shortbread cookies (really, really good shortbread, David would later remark). 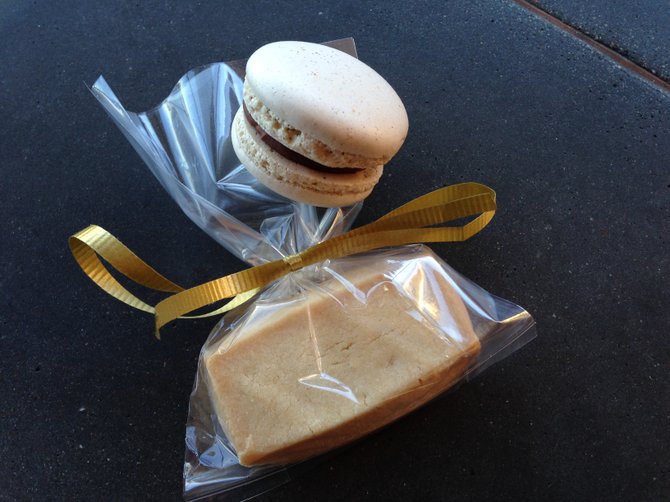 The only disappointment of the meal was at the very end, when David asked if they could pull a solid espresso, and the $8 cup turned out to be just as regrettable as most. More a small cup of strong coffee than a true espresso, and all this after David had stressed, “Really, if you guys don’t do it classic Italian style, very short, viscous like motor oil, with a thick crema, then it’s cool, I’ll pass.” They insisted they could, and they failed. David didn’t want to make a fuss, but when pressed to offer feedback, he couldn’t lie. And though David had tried to be as diplomatic as possible, our server insisted on making a new cup. Unfortunately, their second attempt was not much different than the first.

We’d expected this meal to be pricey — the courses, the deluxe ingredients, the wine pairings and the fact that at no point did the waiter proffer any numbers along with our options. But no matter how much we’d thought we’d prepared ourselves for an exorbitant bill, when we saw the final tab (which was exactly double our guesstimate), the air was sucked from our lungs.

“Can you cover the rent this month?” I asked my love.

“Should we look at the itemized receipt?” Kerry queried. We didn’t mind paying top dollar for a rare experience, but we wanted to make sure we weren’t being swindled. The web site quoted the 10-course menu at $10 less per person than what we’d been charged, but I insisted we forgive the discrepancy, because when we’d entered into what had turned out to be a four-hour food ride, I’d said, “Give us all you got,” and never asked for the cost.

“You know what?” I looked around the table, at my husband, at the faces of two of our dearest friends. “Even if I’d known this number going in, I’d happily pay it again to spend four hours with you guys, who we rarely see, and to experience all the crazy, expertly executed dishes we just tasted. This wasn’t just a meal. It was one of those peak experiences we’ll remember all our lives.”