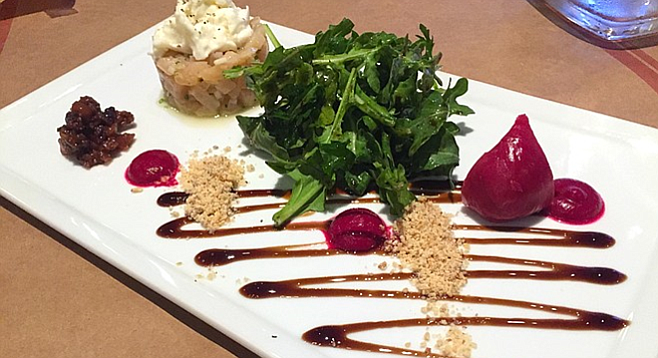 Ever since we first saw the sign announcing a new French bistro named Et Voilà would soon be opening, David and I found ourselves forgoing the freeway to take the longer route down Adams Avenue so we could track its progress. One weeknight while heading toward Hillcrest for dinner we noticed Et Voilà’s lights were on and people were inside. We immediately forwent our original plan, turned the car around, and went to see if we could score a table.

From the table, facing the bar area in Et Voilà

The guys who own and operate Et Voilà (and they’re all guys) have a diverse background, with an emphasis on France. Owner Ludo Mifsud, most recently of the now defunct Tapenade and its reincarnation, Bistro du Marché, grew up in the French Riviera and worked in Paris before landing in La Jolla over ten years ago. Tapenade was the first French restaurant I’d ever been to (David took me there for dinner back when we first started dating). Et Voilà’s chef, Vincent Viale, was born in Provence, schooled in France, and also worked at Tapenade as Executive Sous Chef.

Country-themed chicken stamps on the brown paper atop each table

The atmosphere is an inviting blend of casual and upscale — you get the sense that it’s a “nice” establishment, yet you don’t feel out of place if you happen to be wearing a sweatshirt rather than a jacket. The menu is broad, replete with both classics and contemporary French dishes.

We began with a beet and burrata salad ($11). The presentation was just as delicious as each actual bite of the golden beet terrine, topped with a dollop of burrata and dipped in little globs of beet purée, balsamic drizzle, and nut crumble.

Our first drinks were disappointing. David, a Sazerac lover, ordered Le Sazerac ($11). Instead of the advertised “Pastis rinse” it seemed as if someone behind the bar had added a generous splash of the anise-flavored French spirit, leaving David’s sazarac tasting like iced licorice. My Venetian Spritzer was fine, though I prefer the classic version with Prosecco rather than Sauvignon Blanc. We ended up switching to wine and were pleased with the selection. Our server recommended pairings for our entrées, and they were spot-on.

We shared a cup of the French Onion Soup ($9). It was a quality version, savory and gooey, and improved by a pinch of added salt. David’s favorite iterations of French Onion Soup tend to include a touch of sherry. Though hardly an indictment of Chef Vincent’s version, ever-hopeful David was disappointed when he failed to detect its presence.

I ordered the Braised Angus beef short ribs with ricotta-stuffed zucchini ($26). It was a generous portion of meat, and the preparation was superb. A fresh sweet red pepper purée beneath the hot, creamy ricotta-filled strip of zucchini made for a pleasant mouth feel, and the cabernet sauce was rich and savory.

David went with his go-to at any French joint, the duck confit ($25). This one came with a small cassoulet of cannellini beans and duck sausage, and the duck was served with a port wine fig sauce. David’s only criticism was that he would have liked the skin to have been crispy.

For dessert we shared the Tarte Tatin. (Oh! This reminds me: our server pronounced just about every French word incorrectly. He was otherwise wonderful, but given the French guys driving the place, I was surprised pronunciation hadn’t been included in the menu training.) The traditional upside-down caramelized apple tart was presented right-side up in a small skillet, bubbling hot, straight from the oven, with a scoop of fast-melting vanilla ice cream ($8). The crust was excellent, and the addition of raisins and pecans had David reminiscing about Fall in New England.

Eyeing the bar area and the seats that face the busy sidewalk, David and I agreed to come back soon for happy hour to sip wine and explore the cheese and charcuterie and this expanding, vibrant neighborhood.