Does A.R. Valentien Live Up to the Hype?

“Why is a meal at one restaurant so much more expensive than a meal at another?” I asked David, as I drove us north toward A.R. Valentien. The restaurant, located at the Lodge at Torrey Pines was where David wanted to dine on his birthday. Neither of us had been there before, but we’d checked out the menu a few times and had seen it listed often as a top restaurant in national publications. “I mean, a three-course meal at Wine Vault is $20, and that’s excellent food. So what is it that makes this three — wait, I think it’s actually four-courses, but still — so much more expensive at $75?”

“Well first, there’s overhead,” David explained. “There’s how expensive the location is, but in terms of service, it’s how many guests per server, you know, the overall level of attentiveness and professionalism.”

“But that’s just one part — some of the cost is due to the quality of ingredients. They might have USDA prime dry-aged steaks that we couldn’t buy at Vons. There are foods sourced specifically for a high quality beyond what we can find in our local shops.”

Our expectations were high when we entered the restaurant. We were joined by good friends and fellow foodies, Mia and Kerry. The last expensive meal I had was in September, when David and I went to Napa to celebrate our 10th anniversary and we dined at Redd in Yountville, a town known for its culinary geniuses. It was one of the best meals we’d ever had.

I didn’t try the amouse bouche — David is my taster, and though he liked the bite, he knew I wouldn’t care for the fish-flavor of the tuna. 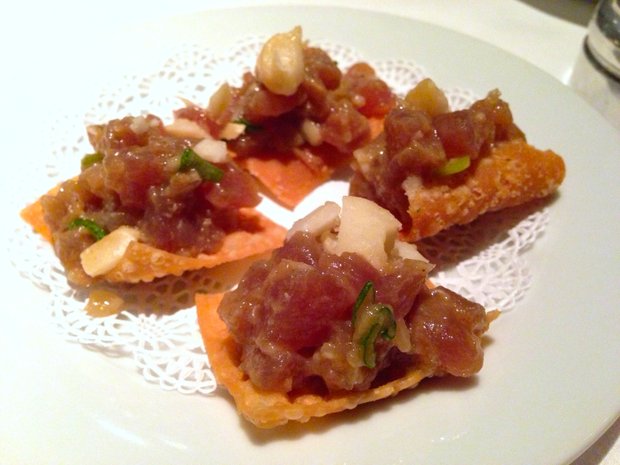 David and Kerry were pleased with the pâté. They got the platter of three, comprising chicken liver, duck and pistachio, and potted beef short rib. The chicken liver was the most flavorful. The others, while nice, seemed to be a little underseasoned, especially considering their being served cool. 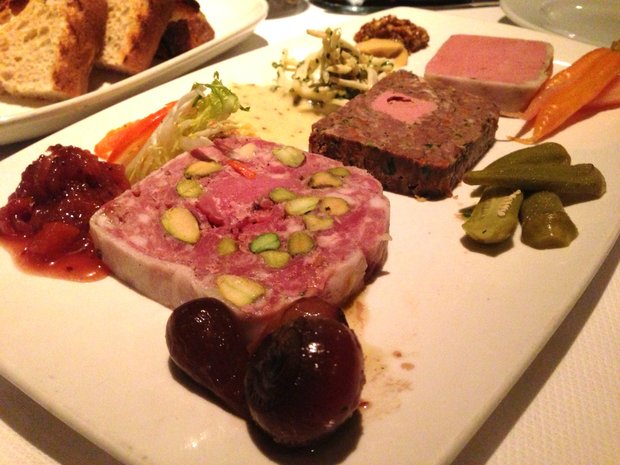 I ordered the “butternut squash soup with lobster and blood orange reduction.” But what I received tasted like blended raw ginger with a hint of squash. The smell of ginger overwhelmed the table. Even Mia, who loves ginger, said it was so unbalanced as to be inedible. Our server (who was great, by the way, but this is to be expected at a place like this) agreed that it was strangely heavy on the ginger, especially for a flavor not even mentioned in the menu’s description, and removed the dish from our bill. 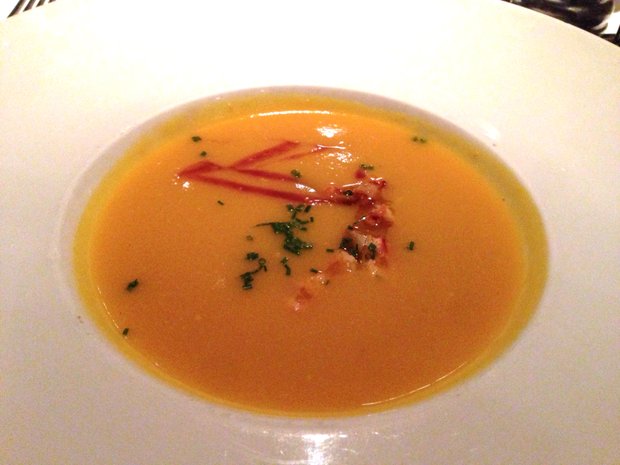 The next disappointment came in the form of Mia’s salad — “roasted apple, prosciutto, burrata, pickled butternut squash, arugula, pepitas, and a cider reduction.” This was described by our server as a “warm salad,” so we were expecting the apples to be roasted all the way through. And warm. Instead, they were lightly browned on the outside, but still cold and crunchy, as though fresh. The pickled squash was also crunchy. The burrata, which we expected to be cool and fresh in contrast to the other warm items, was room temperature. After being passed around the table twice, this dish still had plenty of bits left on it when it was removed from the table. 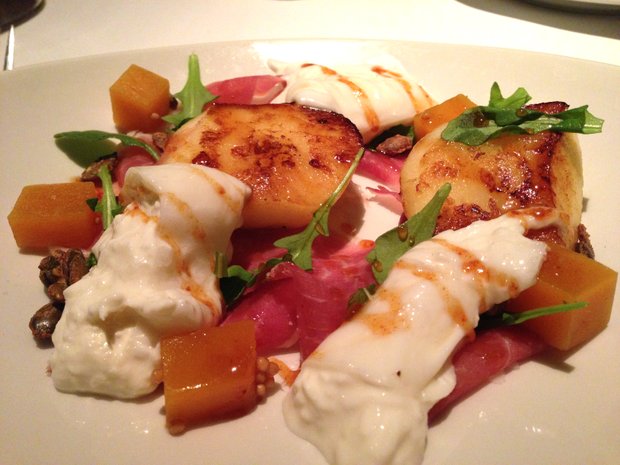 Mia ordered the sea bass, served with spaghetti squash, ginger (there’s that flavor again), snap peas, and pearl onions in a brown butter. I had a bite of the fish, it was nice. And, most importantly, Mia was very happy with what she ordered. 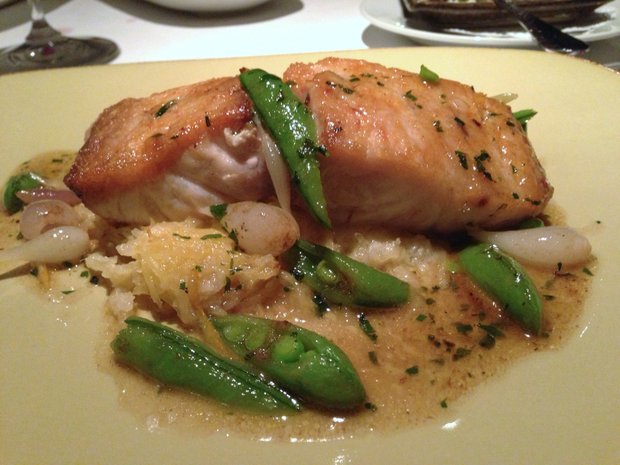 Kerry ordered veal cheeks. I tried a bite, even though David tried to stop me. I spit out what felt like a ball of slime onto my plate as David sighed and Kerry and Mia laughed. “Veal cheeks are a fatty cut, you know,” David said. He’s all too familiar with my texture aversions. Kerry, who also has no problem with oysters, loved every bite of it. 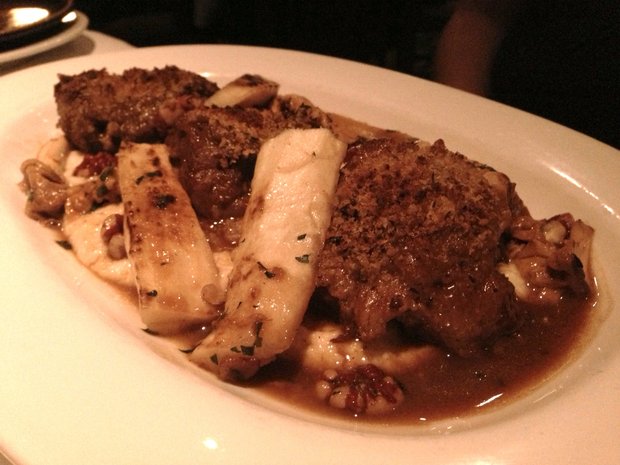 The birthday boy ordered the “oak fire roasted Niman Ranch pork loin,” served with house made sauerkraut, double smoked bacon, and roasted carrots and apples. After his first bite, a perplexed look came over my man’s face. “This tastes just like ham,” he said. “I like ham, but when I order pork loin, I’m not expecting it to taste like ham.” The pork itself was tender and well prepared, but one bite and I agreed, it totally tasted just like ham. 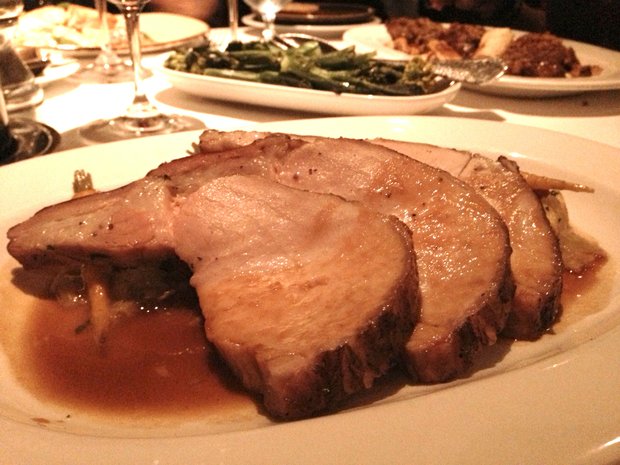 My entree was a big step up from my ruined appetizer. I ordered the scallops, with shaved brussels sprouts, lamb bacon, and squash. I loved the sweet bits of the grilled squash in contrast with the salty, rich bacon. The bacon sauce on the brussels sprouts was a little heavy for the dish overall. But the scallops were cooked to just the right temperature and texture (meaning not overcooked, and perfectly pan seared). 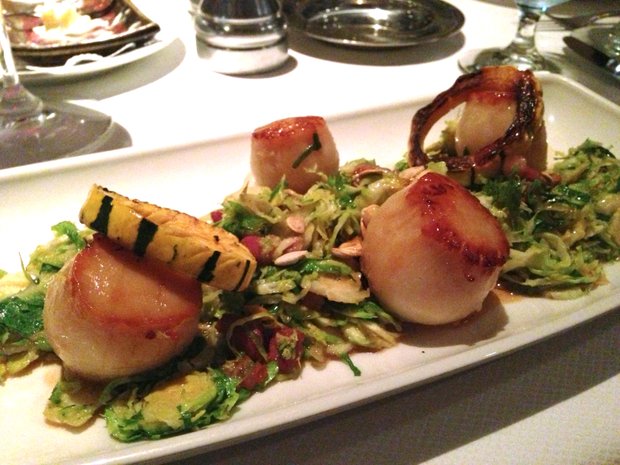 Overall, it seems like things may have slipped since the restaurant received all those local and national accolades in 2009. When you save up your pennies to experience an amazing meal on a special occasion, you hope the restaurant will live up to the hype. In this case, unfortunately, it didn’t.