Paella is usually a dish that David enjoys only at restaurants. He gravitates toward the traditional seafood-centric versions. But for a recent dinner party, David prepared a Barb-friendly version of paella at home, one with chicken, chorizo, and shrimp, minus the clams and mussels to which I’m texture-averse.

1. Cut mushrooms. I really thought this was part of the recipe, but it turns out the mushrooms have nothing at all to do with the paella. They were for an appetizer. 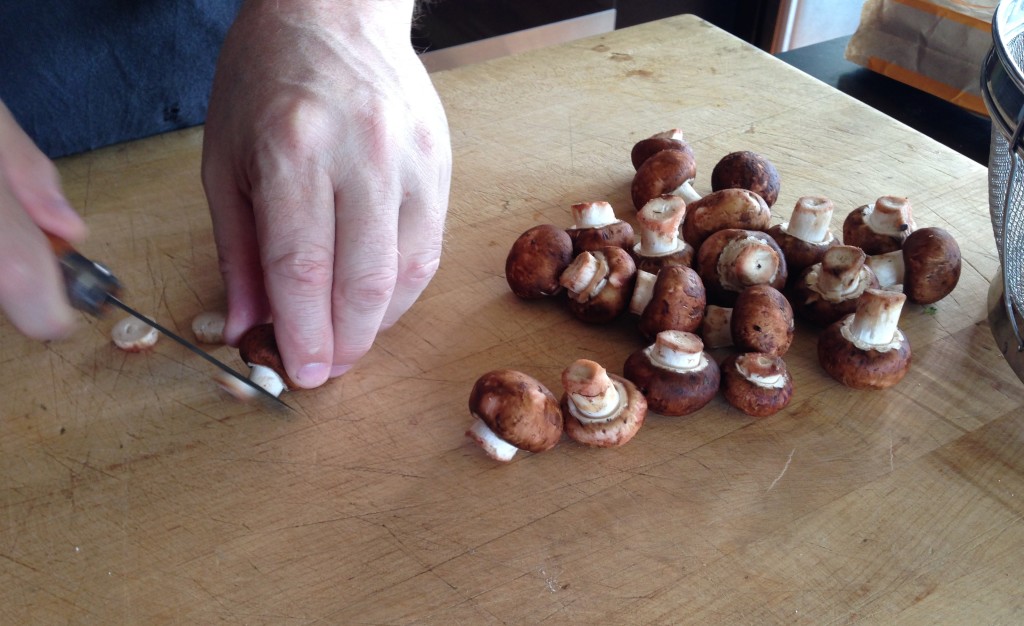 See that cutting board? David uses that for everything. I try not to think about all the bacteria that could be festering in that thing. Sometimes, he scrubs it with a sponge which, for some reason, seems even more unsanitary. Every time I mention this, David sighs heavily and rolls his eyes. He insists wood is more sanitary than plastic, and has even shown me studies to back up his claim. But my eyes only see cartoon-like bacteria. Everywhere. I’m working on it.

2. Sautee the mushrooms. David’s a perfectionist about most everything. Even his mushrooms are perfectly lined up. Look at that. Sickening, isn’t it? As I hovered over him to take this picture, he claimed this setup was so that he could make sure he cooked all the mushrooms on both sides. I’m dubious. In this pan is garlic, sherry, and other stuff that tasted good. Now David’s handing me a piece of paper and asking me to list all the ingredients. FINE. Olive oil, mushrooms (duh), chicken broth, lemon juice, red chili pepper, salt, why are there so many ingredients? I would never bother with all that. But I’m happy David did, because when it all came together, it was ridiculously flavorful. People were soaking their bread in that sauce. 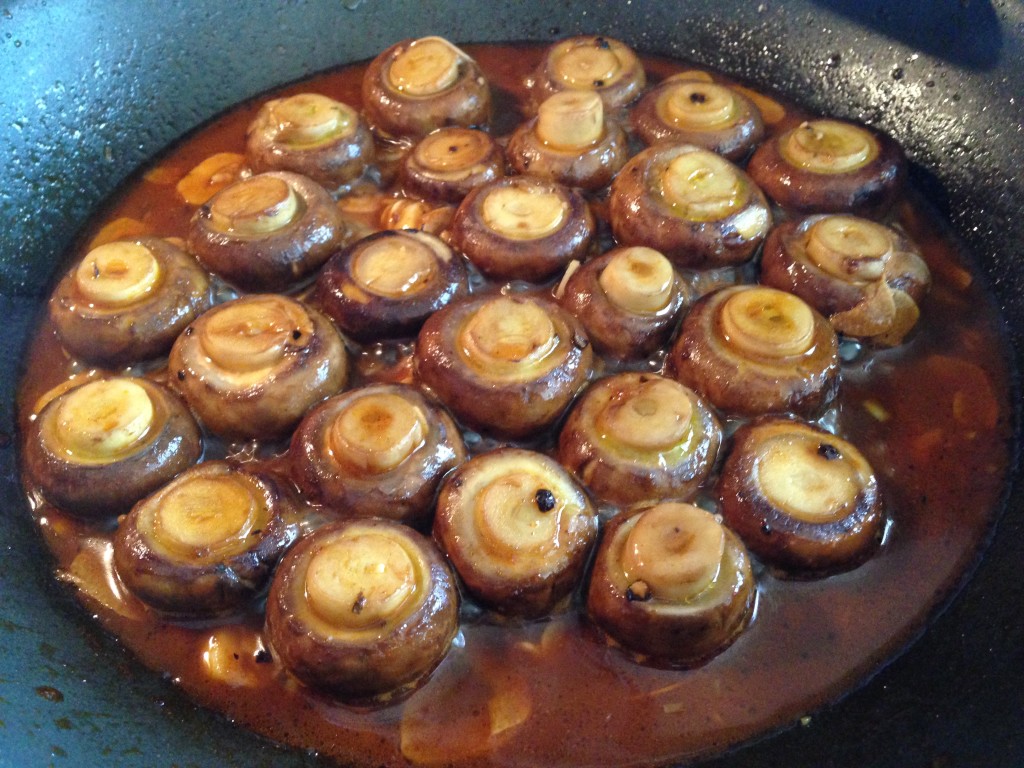 Mushrooms all lined up in the pan 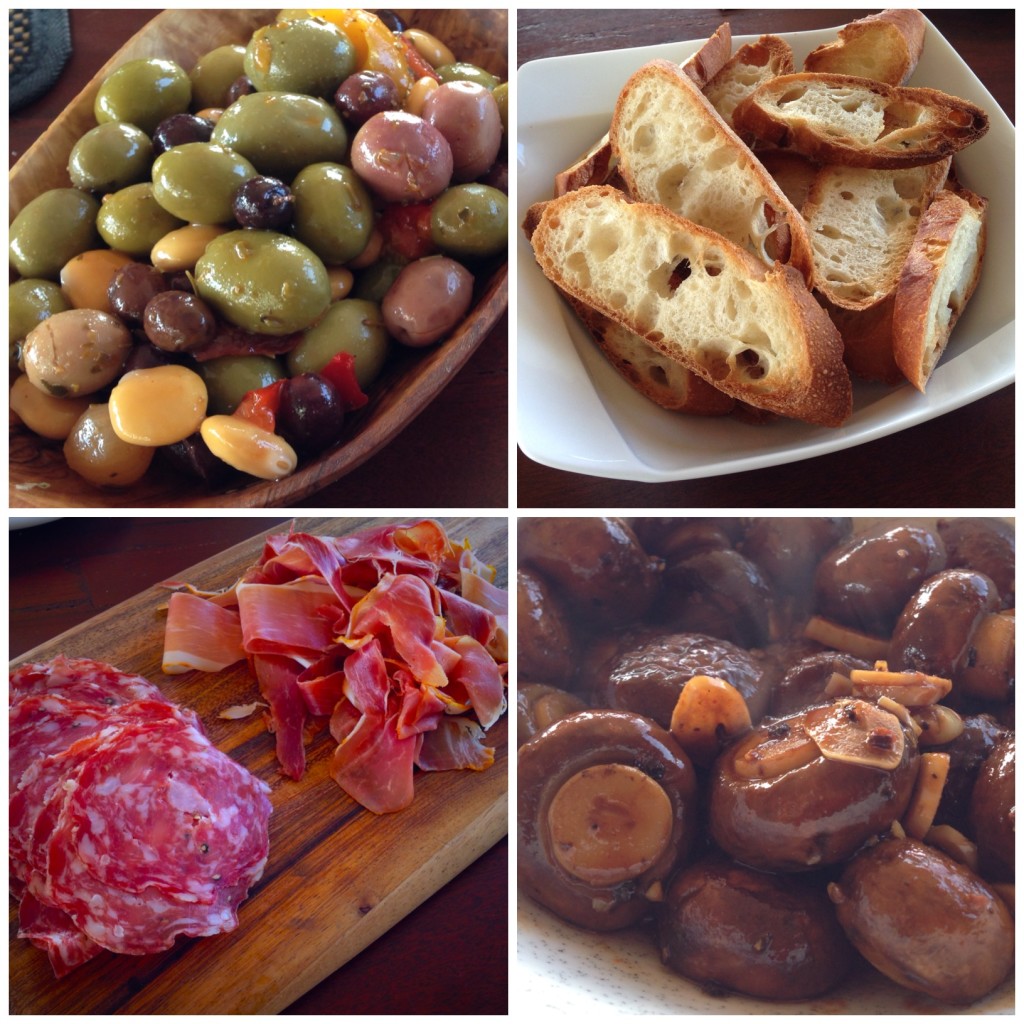 In keeping with the Spanish theme, David served all Spanish tapas, along with Cava.

3. This should actually be number one, now that I think about it. But it’s too late, I’ve already typed, there’s on going back now. David always sets up his ingredients in advance of cooking, or as he likes to call it, mise en place. He has tons of little glass and silver dishes strictly for this purpose. 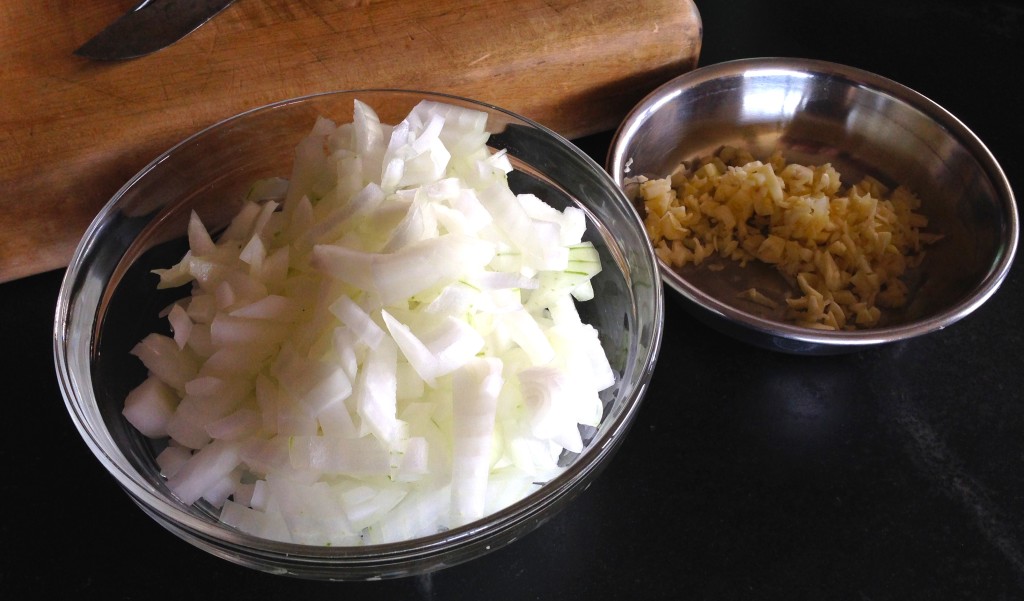 4. At some point, this rice went into a pan with chicken broth and saffron, among other things, like a can of tomatoes, thyme (many puns were made), pepper and so forth. I missed this step, because I was busy playing Candy Crush. 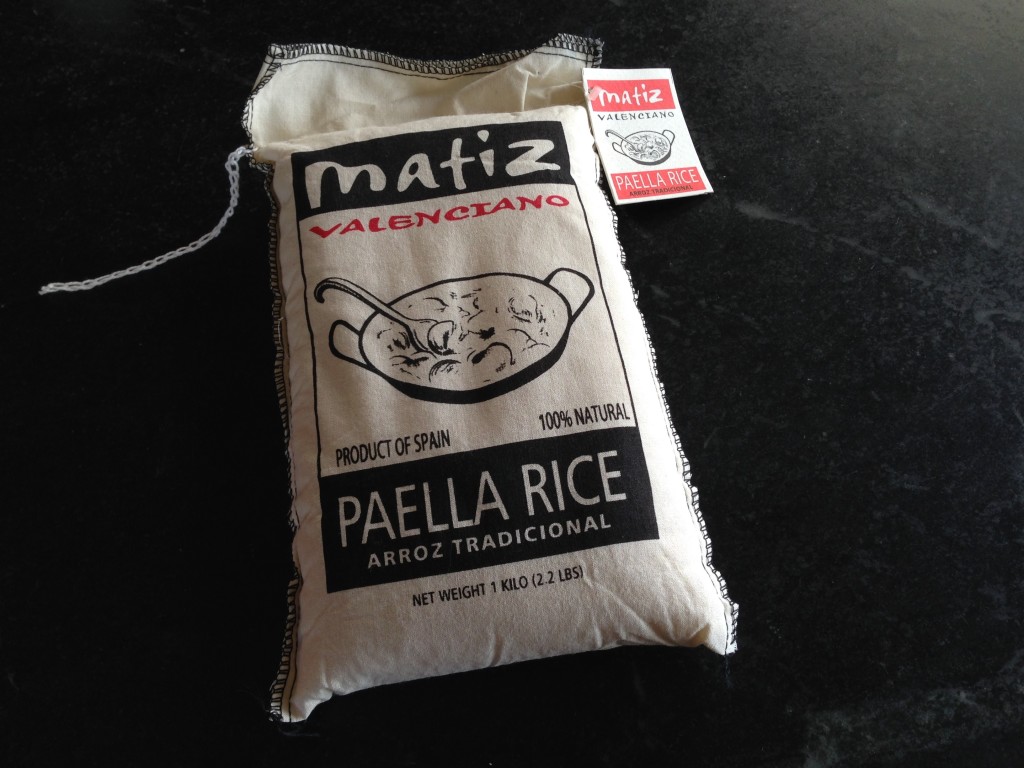 5. Meats! David didn’t cook the meat all the way through the first time, because he knew it would continue to cook in the pan with the rice. The shrimp he cooked all the way, but not the chicken. David hates overcooked chicken. I fear undercooked chicken. We both agree that perfectly cooked chicken is the best way to go. 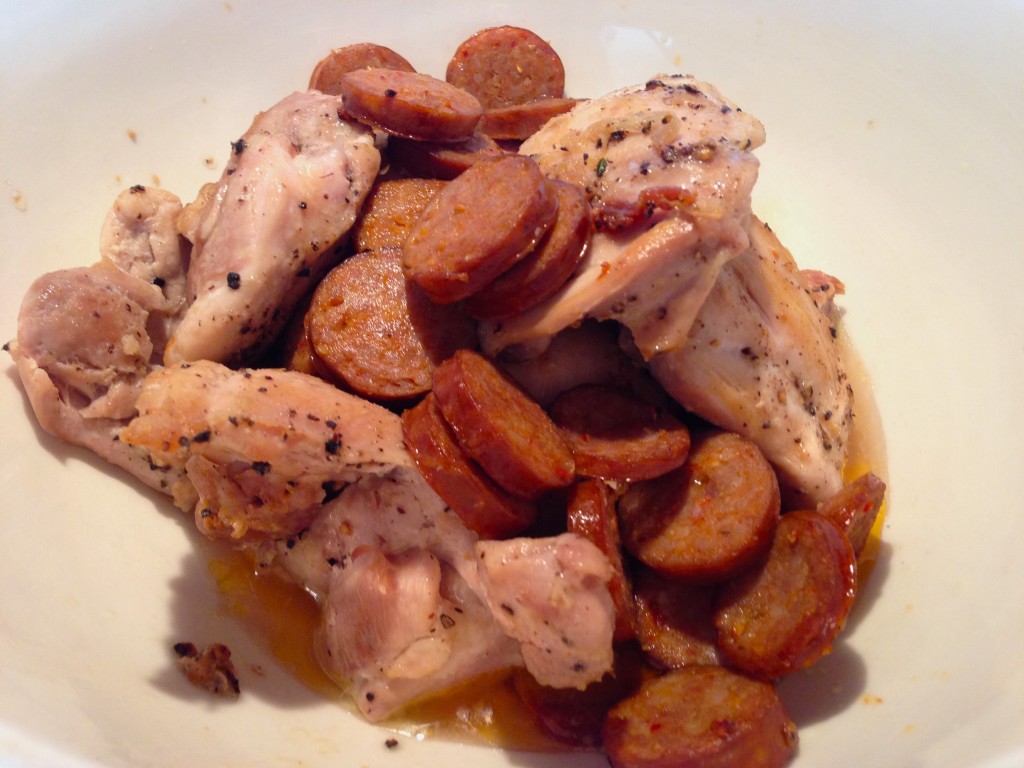 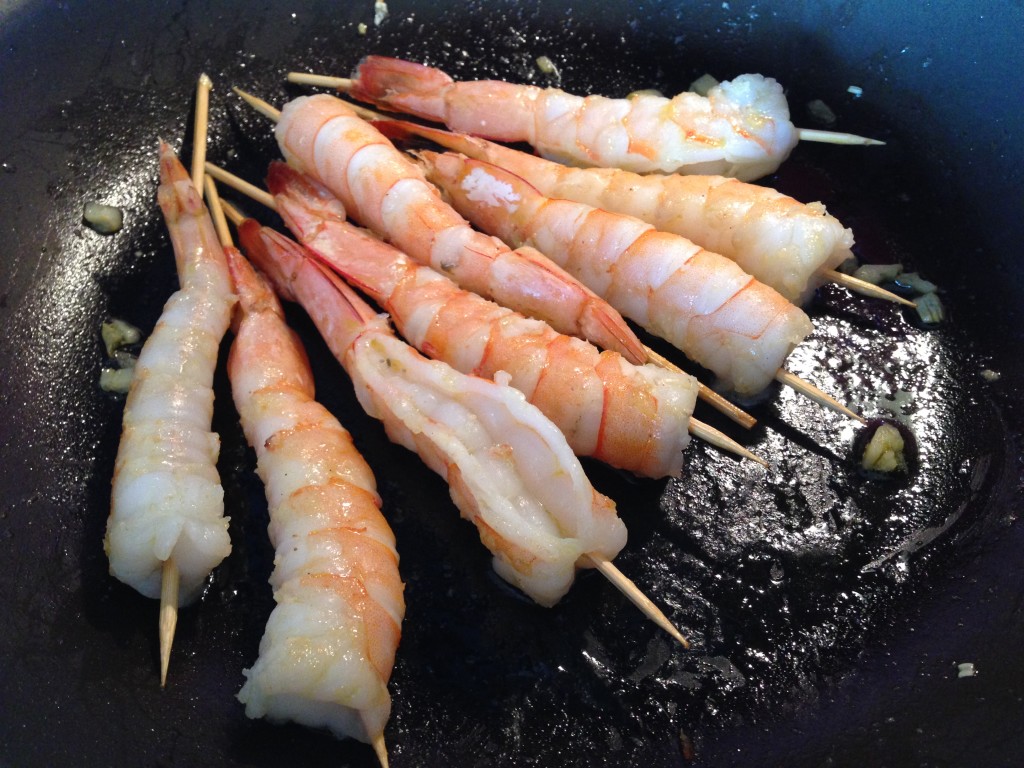 If you don’t know this is shrimp, you really need to get out more

6. The cooking part. More stuff was added to the pan. By this point, David had kicked me out of the kitchen.

7. Plating! A feast for the eyes as well as the… what is it, taste buds? Stomach? All of it. The rice had a nice bite to it, soft and gooey on the outside, still al dente on the inside, and David added peas and lemons for color. Oh, and paprika. The man’s Hungarian, paprika goes on EVERYTHING. 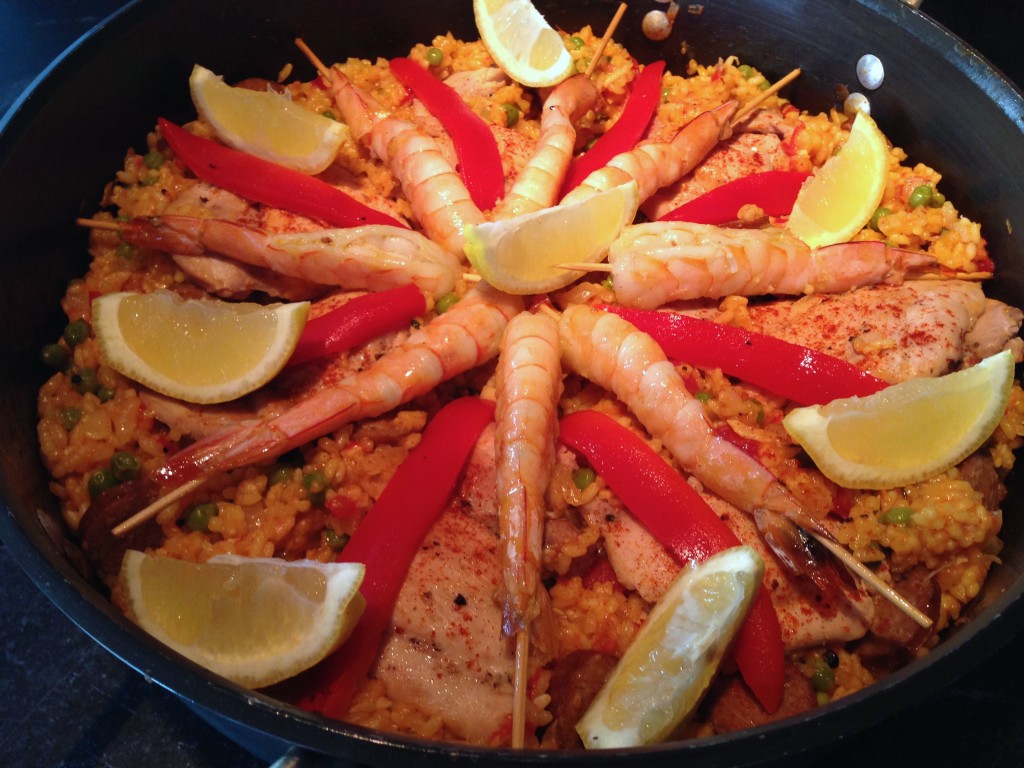 If paella tasted like this in restaurants, I’d actually order it sometime.