On occasion, David is inspired to do something different, particularly when fellow foodie friends are coming over. On this particular night, David decided that instead of a big sit-down dinner, it would be nice to relax on the couches and nibble and sip for hours while we caught up with our dear friends Mia and Kerry. Because we were celebrating good news all-around (work stuff, life stuff), David went all-out. 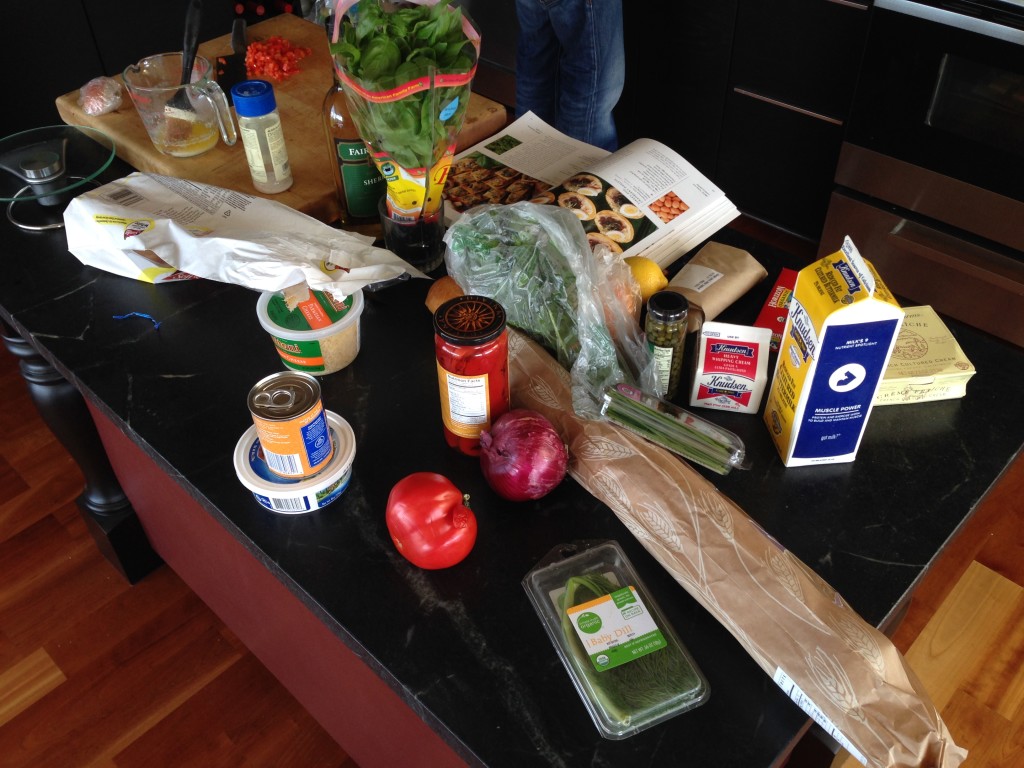 David’s setup on the kitchen island

This is one of those moments where I just can’t help myself, a time when, if he were looking over my shoulder right now, David would stop me. But he’s not, so here it is. David brought back this tomato from the market. I laughed for several minutes while he rolled his eyes. He said it was the reddest, ripest tomato in the store, and that it’s… appendage was probably the only reason such a choice tomato was still on the shelf. Still. Come one. Look at it. 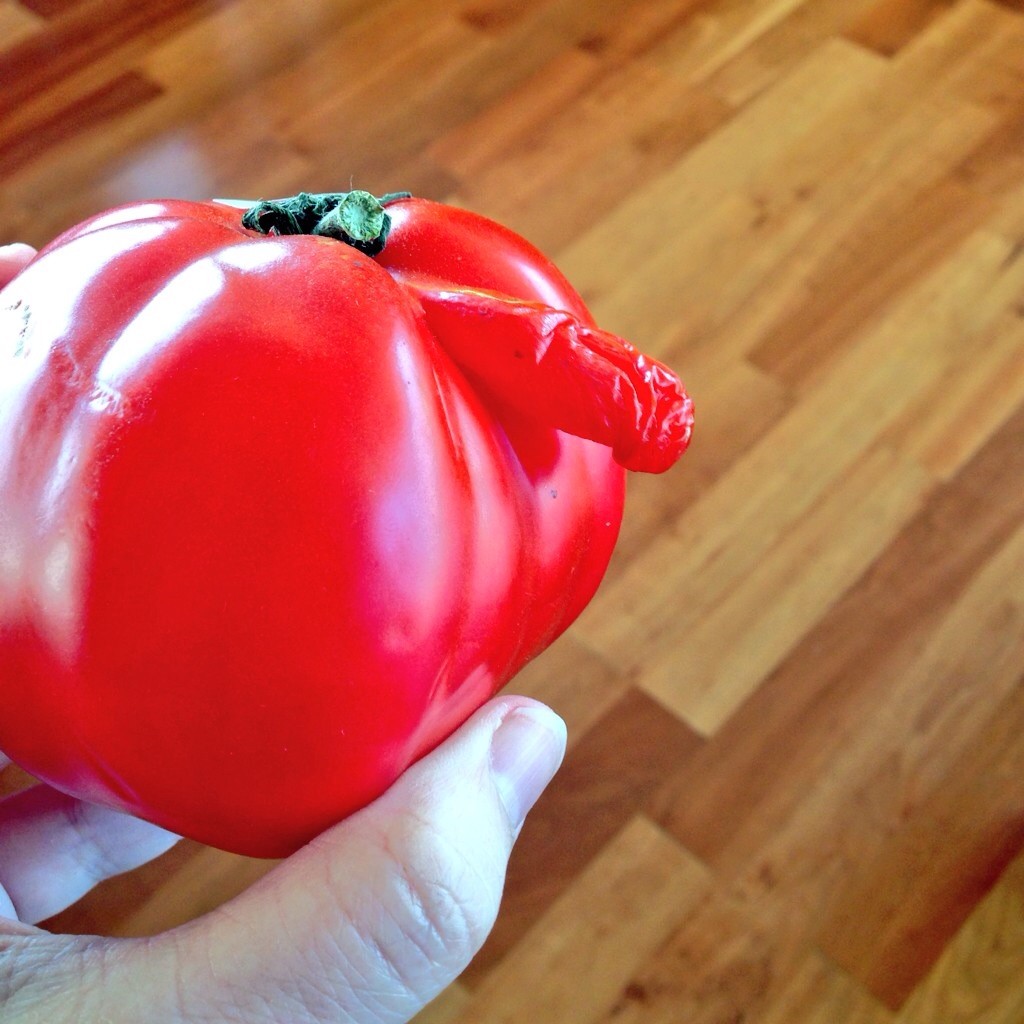 I’m not sure about the order of this, there were so many little snacks they all sort of blended together. I may have missed some of the steps, because I was mostly over here, on my laptop, while David was over there doing what he does. Here’s a shot of my view: 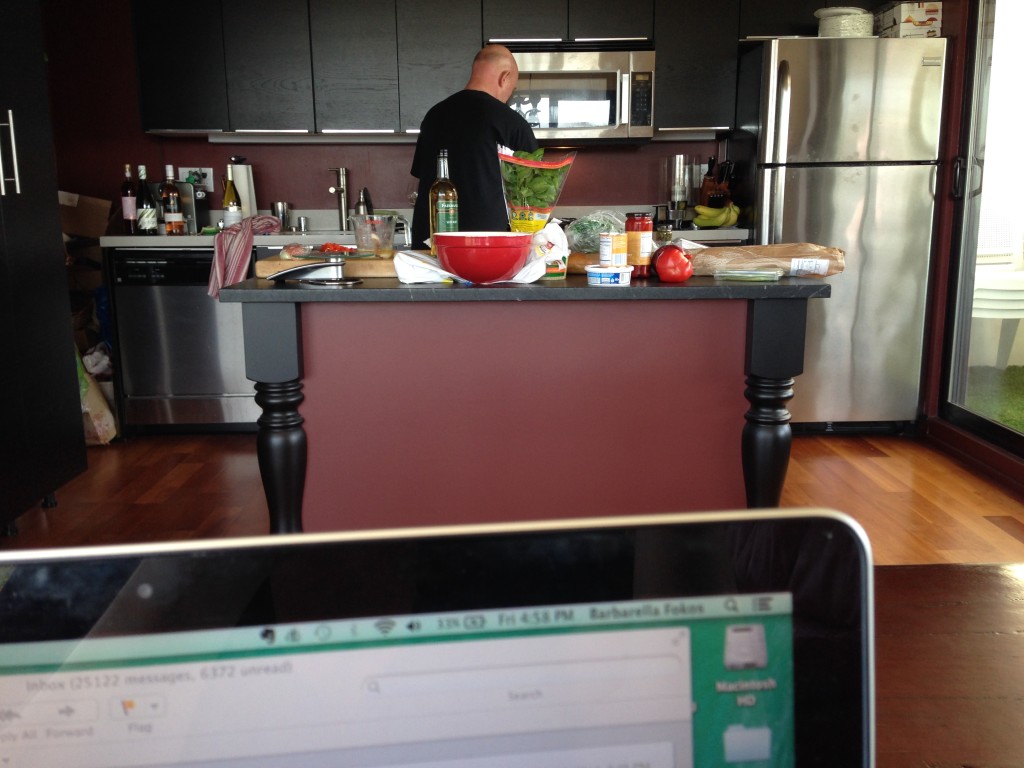 From where I sit, when I’m not hovering over David

First, David set up all the bread bits, which I later learned were going to serve as edible snack plates. There were the white bread squares he toasted in the oven, and more white bread that he squashed, rolled flat with a rolling pin, cut with a cookie cutter, and pressed into a muffin tin. I never knew plain sliced white bread could be so versatile. 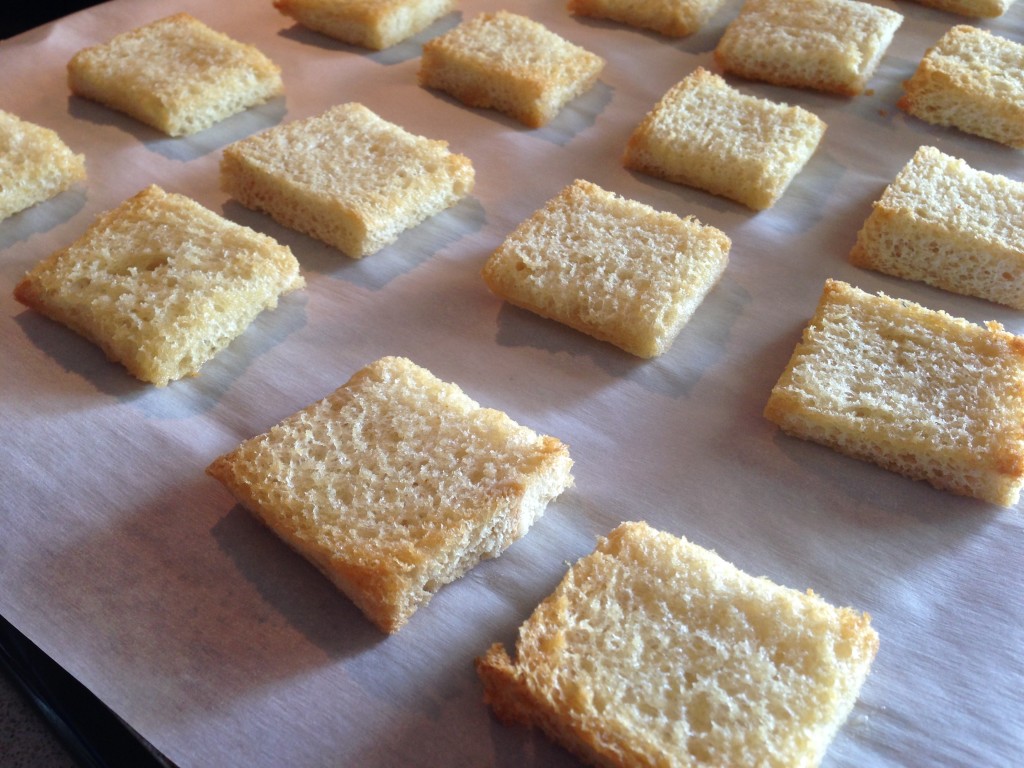 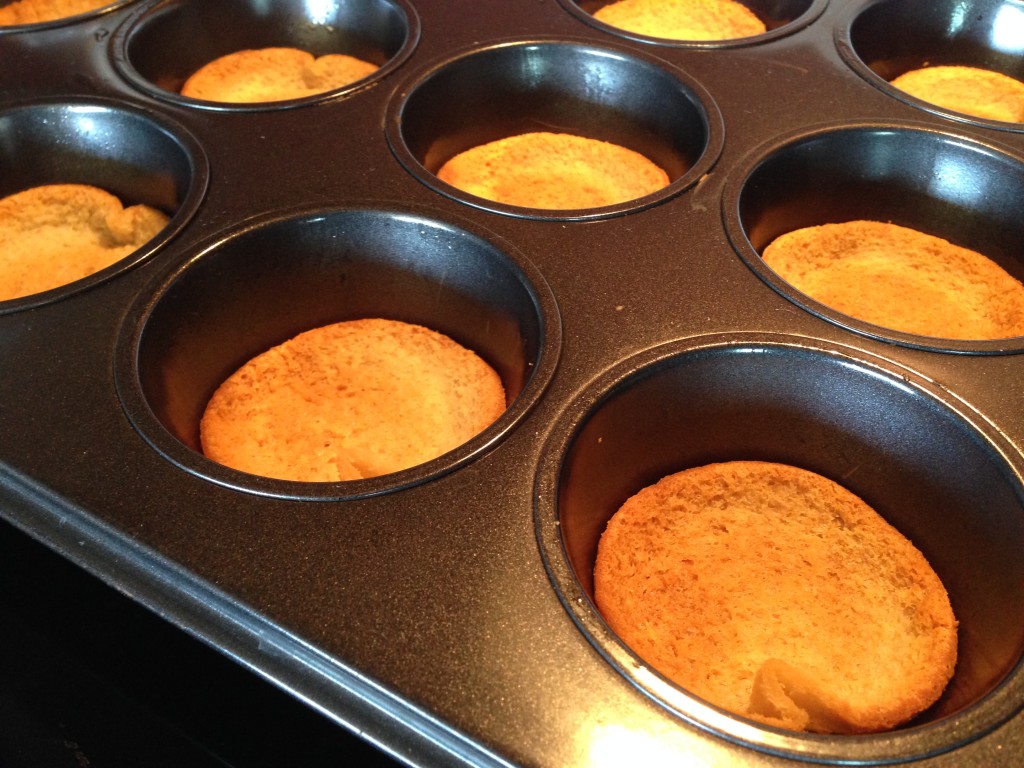 I would never have guessed this was once sliced bread

But bread wasn’t the only tiny food-plate. David also made itty bitty pancakes, with corn, red pepper, and chive. 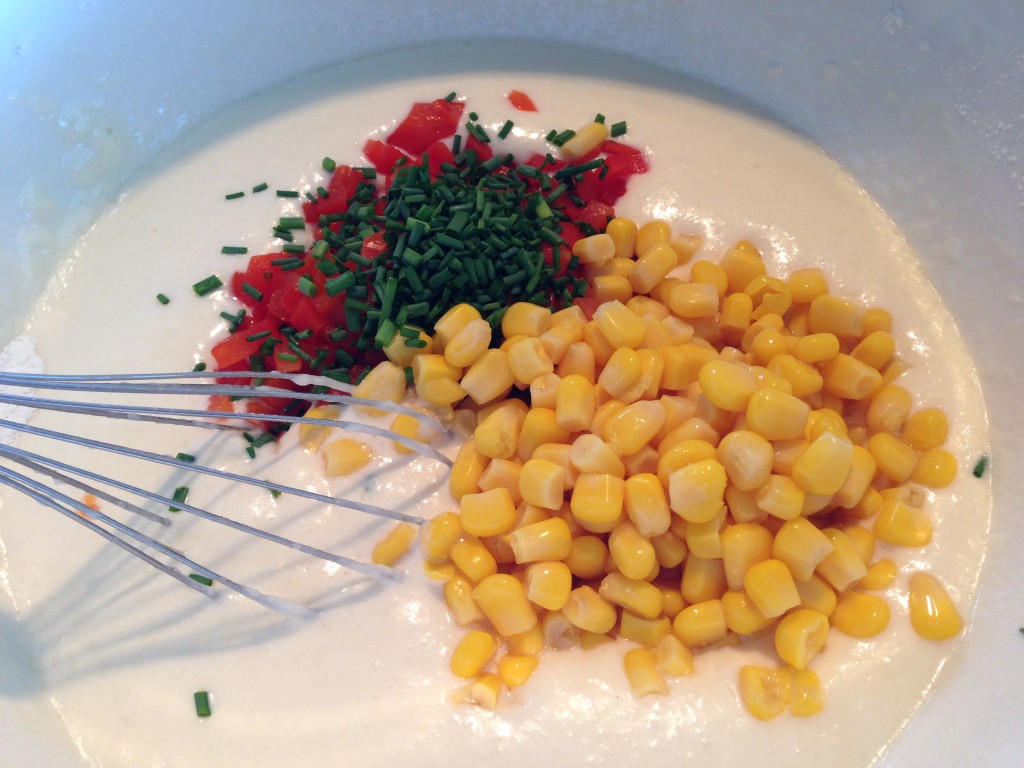 A kitchen note: David has tons of little dishes. He likes an organized mise en place (or setting in place), so before he starts cooking, he sets out all the measured/sliced/diced ingredients in these silver or glass bowls. 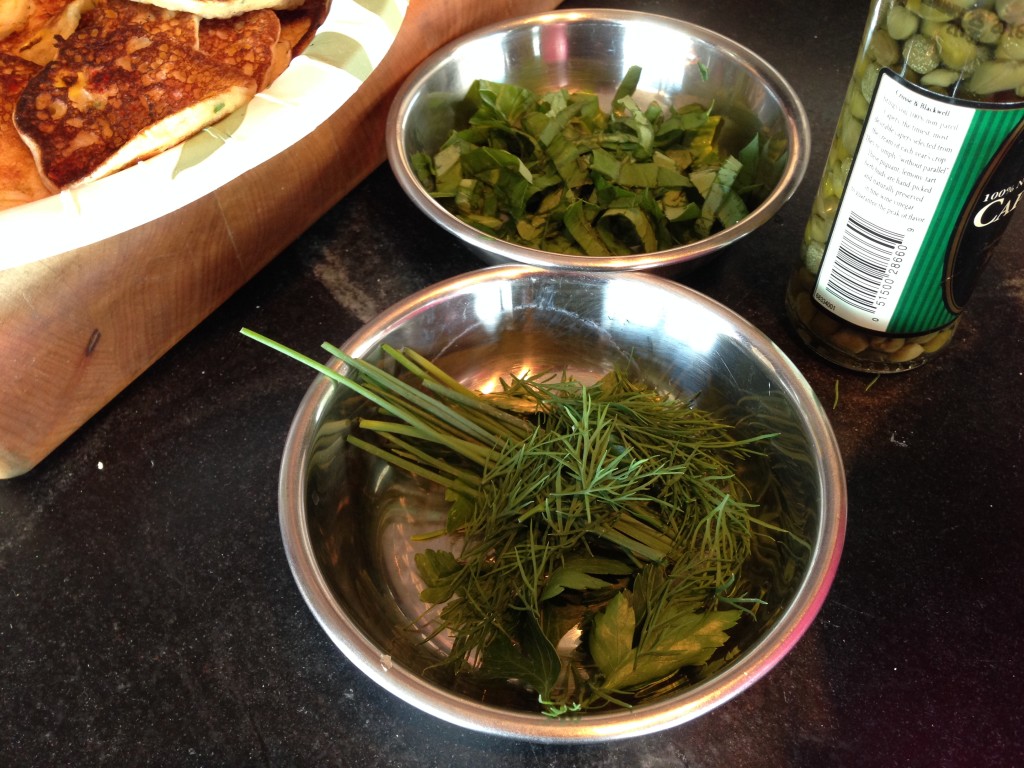 Another kind of bread-plate was made from a Bread & Cie baguette. David had tried getting a baguette from Sprouts — DON’T EVER DO THAT. It was terrible. Like, yuck, craptastic, how-can-you-even-call-this-bread shitty. We asked the ladies to please swing by a store on their way over and grab an actual, edible baguette.

David sliced and toasted the baguette, which he used to make three kinds of bruschetta. The first, using that (indeed it was juicy and delicious) deformed tomato, and basil. This was my favorite bite: so fresh, so delicious, it was like summer in my mouth. 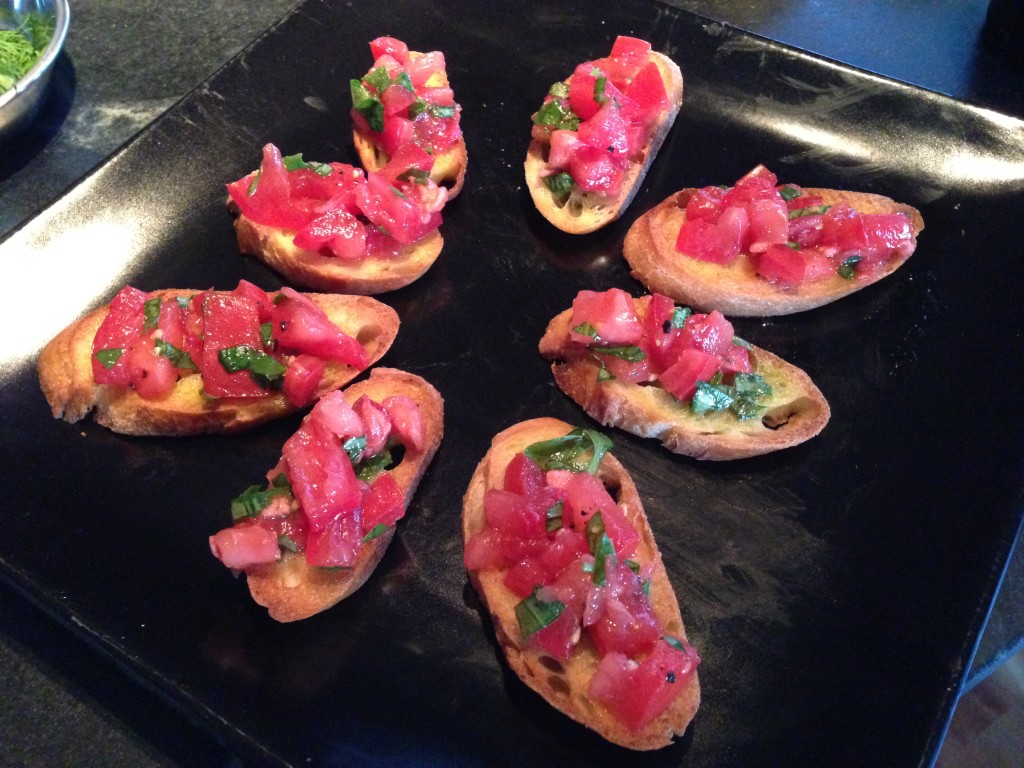 Next, and this is one I did not eat, because capers are too salty and smoked salmon is too fishy, was made with chive cream cheese, smoked salmon, and caper bites, topped with a bit of dill. 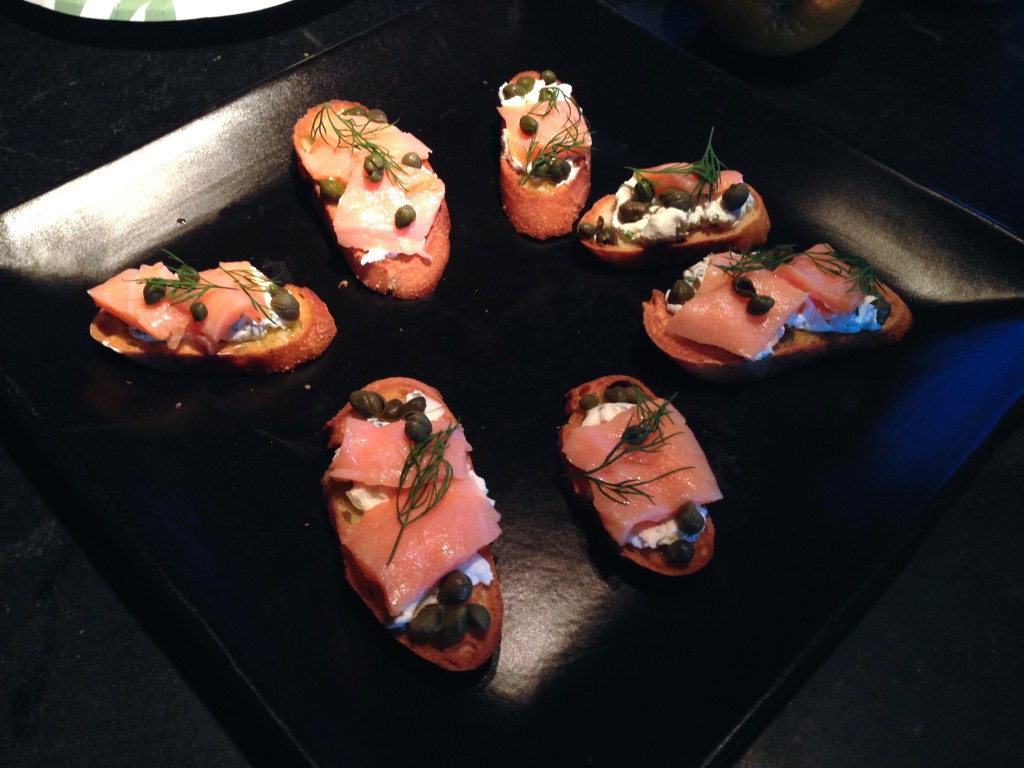 I did not try these, but the ladies seemed to love them

Another one I loved was as simple and fresh as the tomato and basil. Creamy organic avocado, basil, salt, and fresh cracked pepper. YUM. 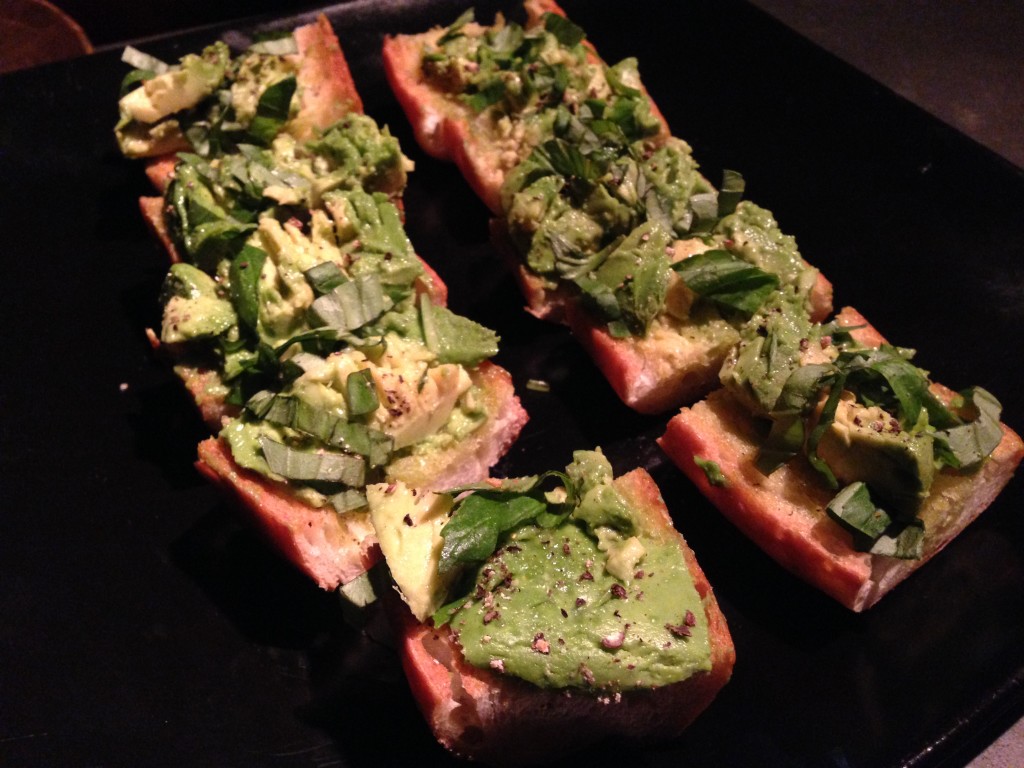 Now back to those bread baskets. David filled the squished, muffin-pan cooked bread bowls with sautéed shrimp. These were nice, but I was all about the tomato and avocado, so I just had one shrimp bowl thingy. 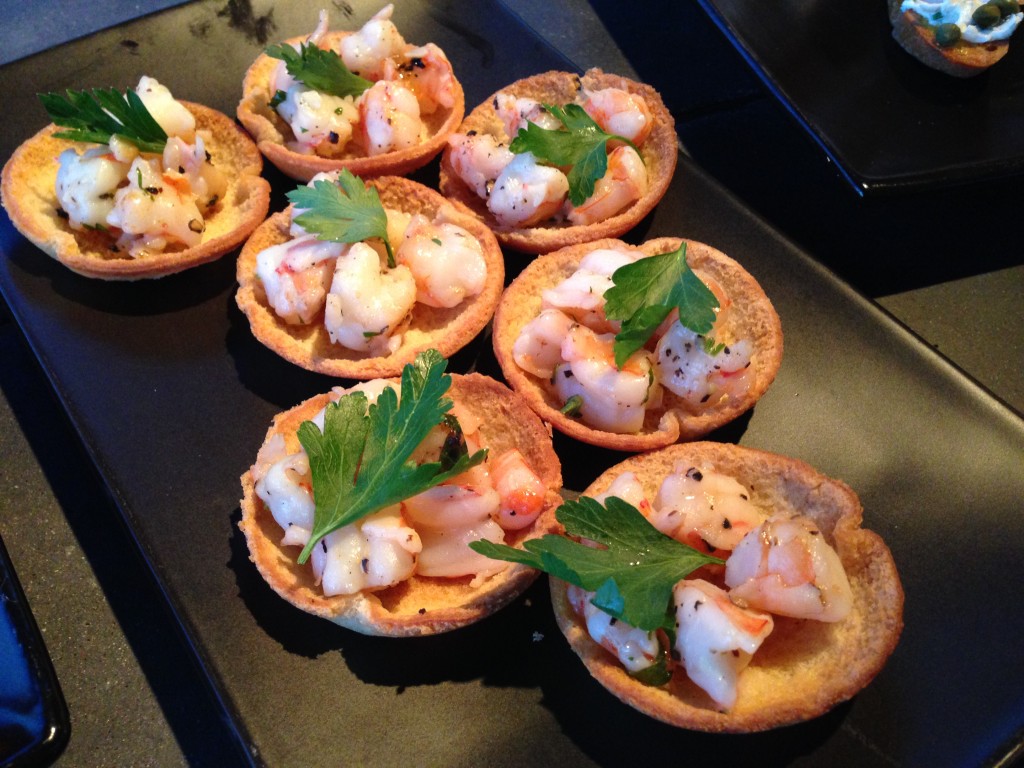 Earlier, he was cooking up mushrooms in a homemade sherry cream sauce, and this is what he placed atop the toasted bread squares, before popping them back in the over to melt freshly grated parmesan. These were awesome. I had more than one. Or five. 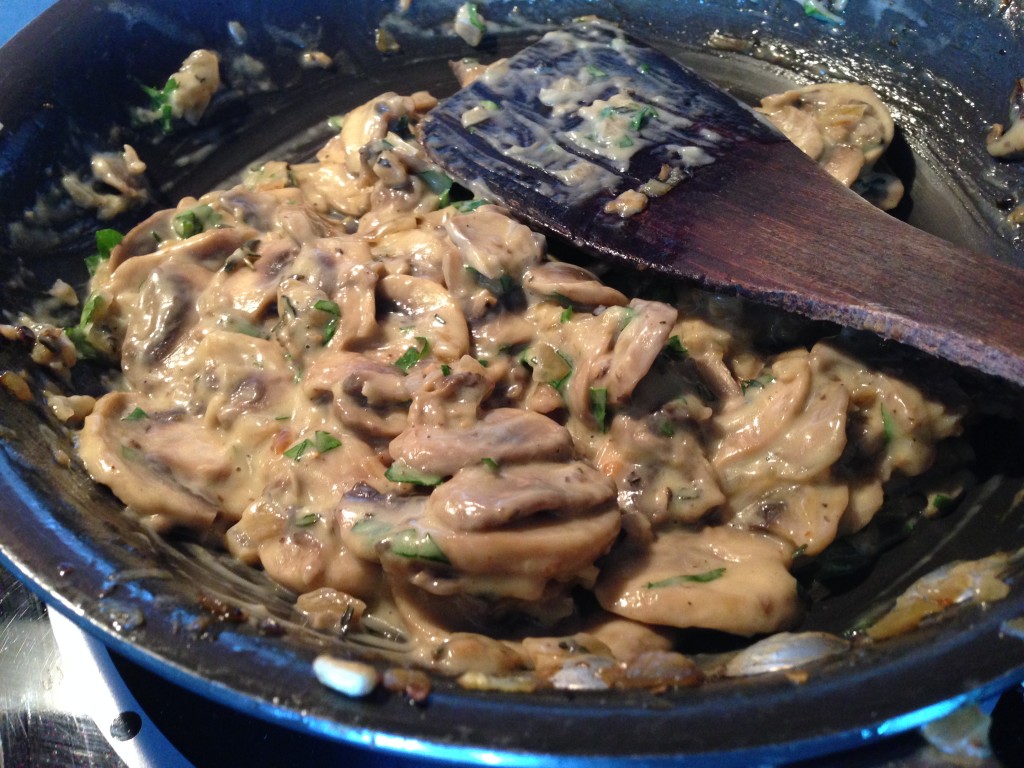 Mushrooms in the pan 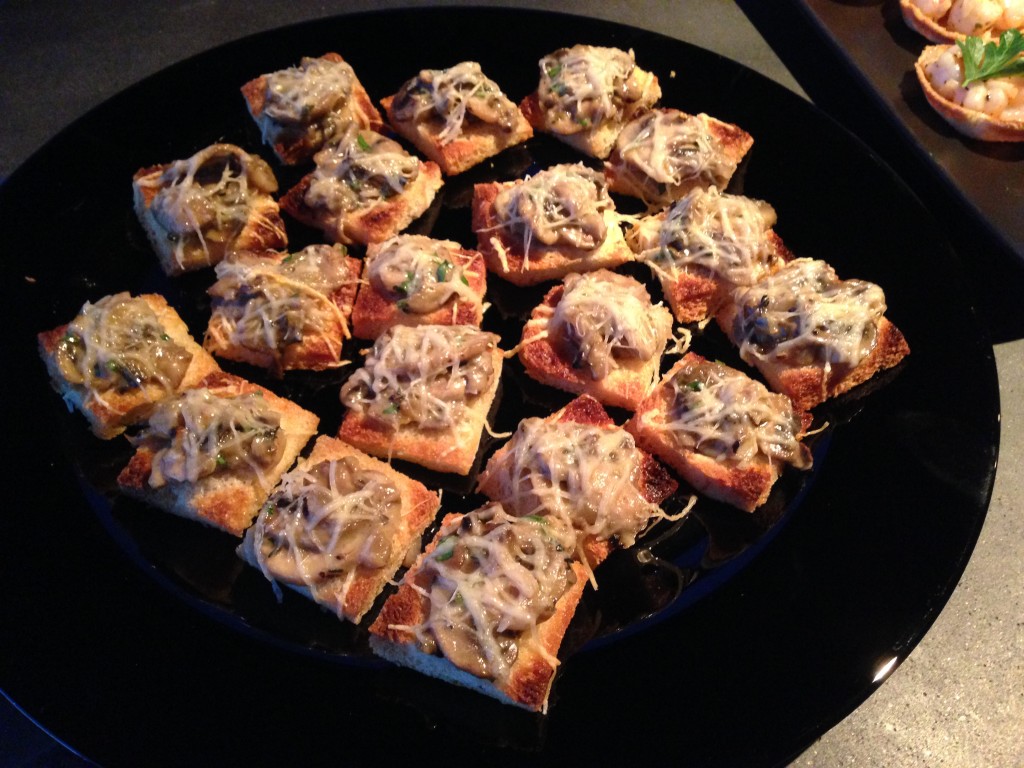 He called these “mushrooms en croute” 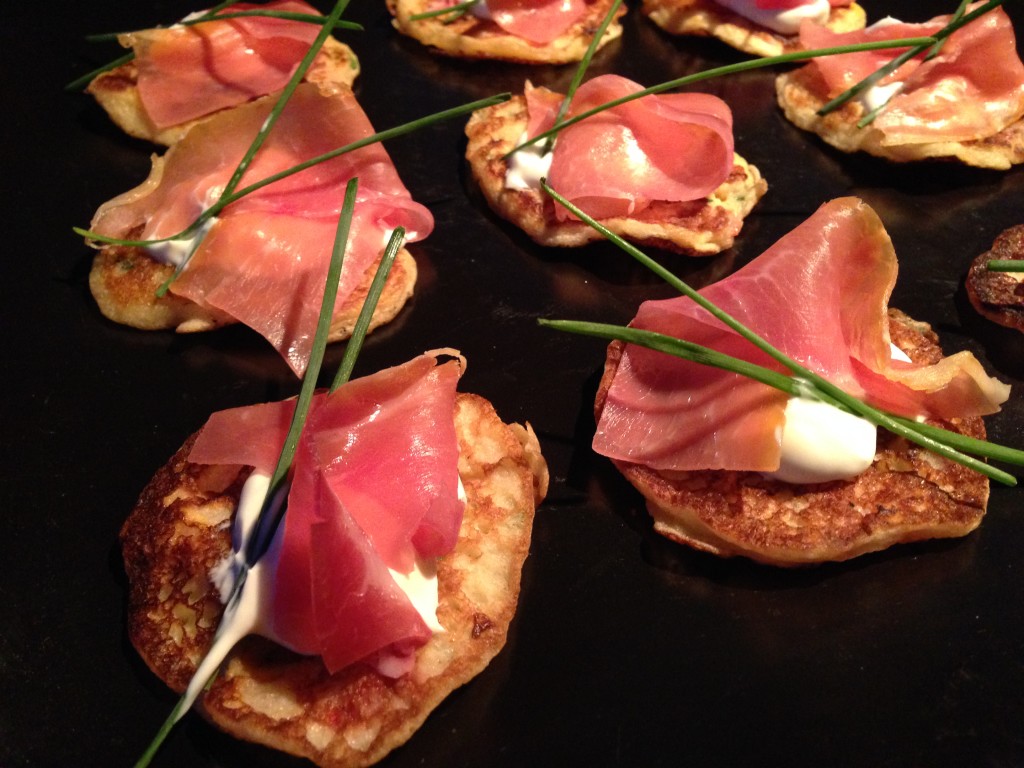 All of this, shared with champagne and friends, made for an exceptional, delectable evening.