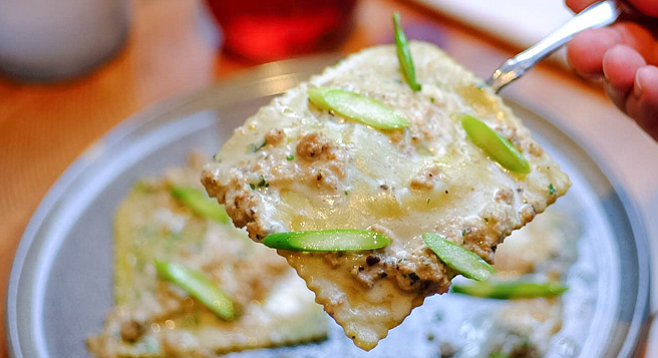 Cucina Sorella (which means “sister” in Italian) offers the same warm and welcoming atmosphere we’ve come to expect from the other cucinas of the Urban Kitchen Group (Cucina Urbana, Cucina Enoteca), all overseen by owner Tracy Borkum and Group Executive Chef Joe Magnanelli.

But this latest addition is more intimate than the larger spaces of its siblings. The most notable difference is on the menu: the more expansive menus of Sorella’s sisters focus on pizza and entrées, but at Sorella the spotlight is on the fresh pasta, as well as antipasto and seasonally inspired share plates. Pizza isn’t even on the menu.

Sorella is in the same space as two previous Borkum restaurants: the longtime mainstay Kensington Grill and the shorter-lived Fish Public. Before opening Sorella, Borkum turned to the neighborhood, posting a survey to message boards asking residents what they hoped to see in the vacant space. The overwhelming response was a desire to see her stay in the ’hood, and there was a lot of encouragement for a Cucina-esque restaurant.

The man overseeing the pasta production is Chef Daniel Wolinsky, who trained with Massimo Bottura (known for his three-star Michelin Osteria Francescana in Italy, which was featured on Netflix’s Chef’s Table series). Even in its first few weeks (a shaky time for any new restaurant), on both my visits the dishes were on point. The cocktails are well-crafted and presented laced with flowers and flavored garnishes, as in the Il Zenzero, a refreshing gin-based concoction with a kick, garnished with fresh basil and jalapeño.

Polenta board with mushroom ragu

There are a few familiar Cucina items, such as the ever-changing polenta board. This one featured a rich mushroom ragu, and the polenta was creamy and savory.

One seafood primi was reminiscent of the previous kitchen — the Octopus Alla Plancha ($14) with piquillo pepper, smoked potato, and crispy pepperoni. The octopus was expertly prepared, tender without being chewy.

David and I are difficult to please when it comes to pasta, so we were pleasantly surprised when, on a recent visit with friends, the texture and flavor of all four of our pasta dishes were flawless. They included the Squid Ink Fusilli with swordfish ($20), Cavatelli Mac and Cheese with black garlic ($16), Olive Pappardelle with lamb shoulder ragu ($20), and Saffron Bucatini with rock shrimp and clam ($19).

For dessert we shared the Chocolate Peanut Butter Bar ($9). David’s Hungarian family often jokes about how Hungarians hate peanut butter. But I had to fight David for the last bite of this one, as it was more like Nutter Butter meets Butterfingers — salty, sweet, and it made us happy.

Judging from our own experience, as well as that of others we’ve spoken to, Sorella is a welcome addition to the Kensington neighborhood. She may be the newest sister in the family, but I have a feeling she’ll be making her own mark.