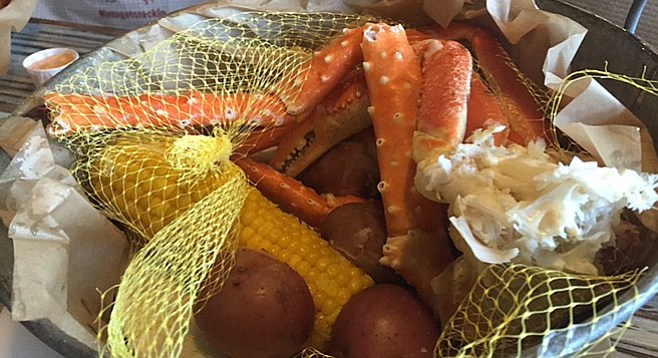 My 11-year-old nephew Brian is the only adventurous eater among my six niephlings. For months he’s been eager to try crab — real crab, straight from the shell. My brother-in-law developed an allergy to shellfish before Brian was born. All Brian knows is, “Daddy loved crab before he became allergic,” and this kid trusts his father’s great taste.

David and I have been taking Brian to “weird food” places since he turned eight. So far, when it comes to expanding our nephew’s horizons, we’ve stuck to joints we know and love. We’ve been to Tofu House for Korean food, Emerald for Chinese dim sum (back when they still had the carts), a few different spots for Japanese sushi, and another for Indian.

Unlike his mother (my sister), Brian absolutely loves seafood. When it came to introducing him to crab — something that, so long as it’s fresh, will taste the same no matter where you go — we opted for a visual experience. Based on our image search, the most in-your-face-crab-leg meal was to be found at Joe’s Crab Shack.

I don’t put much stock in Yelp reviews, but I admit that when I see a place has only two-and-a-half stars, my expectations go down. I reminded David that this wasn’t about us, that it wasn’t even about the food — it was about Brian’s face when he received that giant bucket with alien-esque crab’s legs sticking out of it. And, from what we could see online, the seafood wouldn’t be the only fun visual. There was also the Shark Bite, a goblet filled with electric-blue liquor (rum, vodka, blue curaçao), into which is poured blood-red grenadine (served in a test tube that is shoved into the gullet of a plastic toy shark).

The fried shrimp was good; the flat fish fillets were not

No one liked these hush puppies

Brian enjoyed both eating and playing with his food

We were a total of five (my sister Heather drove both of her boys, Brian and 14-year-old Liam) from San Marcos. The service was fast and friendly, and we were all excited to watch Uncle David walk Brian through the mechanics of getting meat out of crustacean appendages. Heather, Liam, and I ordered off the regular menu, on which the selections are mostly fried. I got the fish and chips: sad, skinny, dried-out filets. Heather’s chicken fingers were much better but pretty standard.

Liam ordered calamari and shrimp, but they both just tasted of fried: not much nuance there, but then again, we weren’t really expecting any. The biggest disappointment on the table (not even Brian liked them) were the doughy, salty, tasteless hushpuppies.

David ordered the Crab Daddy Feast to share with Brian ($32), a bucket containing Snow, Queen, and King crab legs. Instead of choosing a flavor (BBQ, spicy, garlic herb, etc.), he got them “simply steamed” so that Brian could best taste the crabmeat, unadulterated. Brian loved the crab, and we loved seeing him make his way through the shells to retrieve every morsel. In the end, he determined the Queen crab to be his favorite.

Joe’s was great for what we wanted — a giant bucket featuring a variety of crabs for a reasonable price at a kid-friendly joint (we all wore bibs, onto which our server wrote fun names, as is the practice at Joe’s) with colorful, entertaining beverages. Would I recommend it to grown-ups? Probably not. But if you’re looking to introduce a kid to crab for the first time….