Brunch at Searsucker in the Gaslamp 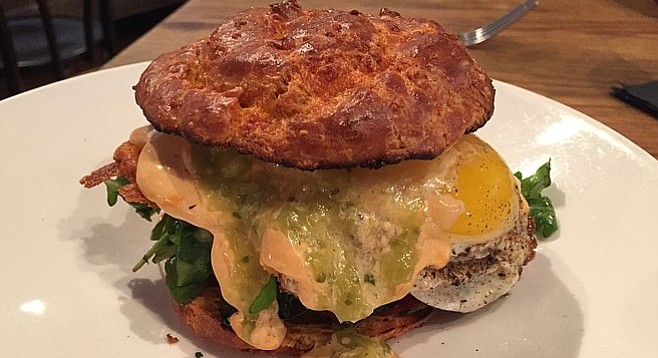 When someone invites me to dine downtown, my initial reaction is usually one of dread. I can’t consider meeting up with friends or attending an event in the Gaslamp without first suffering through images of tangled traffic, impossible parking, obnoxious amateur drinkers, and dawdling tourists moshing through my mind. That is, unless I’m invited on a Sunday (assuming there’s no convention or game scheduled).

On Sunday, the meters don’t require coins; green and yellow-painted curbs beckon my Mini to park beside them without concern for time or tickets. The howling monkeys that crowded the corners the night before are all gathered around a poolside somewhere, nursing their hangovers. This is all to say that when my friend Kimberly invited me to brunch with a group of friends at Searsucker on a Sunday morning, I was quick to accept.

Honey Badger cocktail: too much lemon juice, not enough honey or rye Walking Dead, because zombies must really be into rum

I found a spot to park my car, without having to circle, less than half a block away. Once gathered and seated, we began with cocktails, as you do when you’re brunching on a Sunday. I have to say… we didn’t care for most of the specialty cocktails we tried (all $12), starting with the Man-mosa, which was described as containing bourbon, blackberry, maple syrup, and champagne. I expected it to taste of either bourbon or maple, but the prevailing flavor was bitterness, with a tart blackberry finish.

The Honeybadger was a bit better, with rye, fresh pressed lemon, and honey syrup, but again, it suffered from poor blending — it was all sour lemon juice, the honey and rye barely detectable. At $12 a glass, I look for a thoughtfully crafted, well-balanced drink. Because I could envision the ingredients listed for each drink meshing well, I could only assume the issue here was with execution. The last one I tasted before giving up was the Walking Dead (more pricey at $15), a Tiki-style beverage (as a fan of the show, I don’t see the connection) comprising rum, lemon liqueur, cinnamon syrup, pineapple, and ginger. It tasted like sweet and sour mix.

One Foot in the Grave, it has all the things!

Fortunately, the food at Searsucker was far more harmonious and pleasurable and executed with more precision than the tart libations. We ordered a few things for the table: One Foot in the Grave and the Sticky Bun (each $5). The dish called One Foot in the Grave is a skillet filled with fried potatoes, cheese, sour cream, and bacon, all topped with a big pile of fried onions.

Somebody ordered the Biscuits & Gravy, which, as with the One Foot in the Grave, seemed like a great deal for only $5. It was a full plate, with a rich and savory sausage-filled sauce.

I ordered the Chilaquiles ($13). The kitchen seemed to struggle with the fried egg — first my dish arrived with the egg undercooked (the white part was still runny) and then it came back with the yolk done right, but the white bit was now rubbery and overcooked. Egg problems aside, this dish was super toothsome, and I would certainly order it again. As our server warned, the salsa verde was indeed hot; for me, pleasurably so, but if you’re sensitive to spice, you might want to try this stuff on the side.

Perhaps feeling extra masculine after his Man-mosa, David opted for the Cowboy Steak, with poached eggs, “American fries,” and a horseradish/black pepper hollandaise ($18). As if to punctuate his virility, he ordered it on the rare side. I did not taste from this skillet, but David smiled intermittently to let me know he was enjoying his meal. Jordan drinks the spicy salsa verde to prove my wimpiness; his eyes watered from the heat

Jordan, our group’s champion eater, got The Royal with Cheese, a burger with cheese, bacon, lettuce, tomato, onion jam, secret sauce, and for a few bucks more, a fried egg ($13 with the egg). He cleaned his plate and also managed to drink two sides of the same spicy salsa verde that was drizzled over my chilaquiles.

I like Searsucker as a Sunday brunch destination because the food is solid, the atmosphere is relaxed, and the crowd is minimal. To be fair about the drinks, we could have been stuck with a back-up bartender or someone who was just really off his or her cocktail game that day. Assuming that’s the case, and that the beverages here have the potential of tasting as good as something I might find at Craft & Commerce, then Searsucker would make my short list of go-to brunching spots for large groups in town.