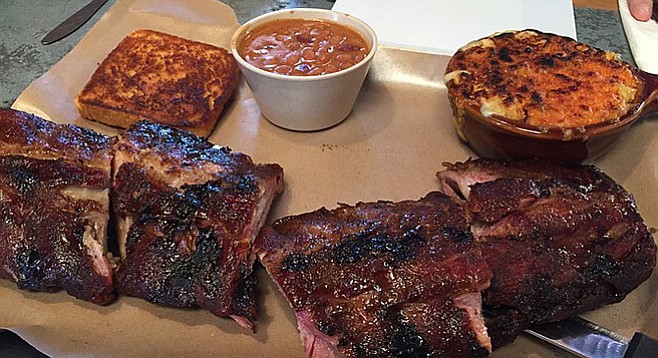 We sat in what Terri dubbed the “Michael section” of her living room, named for two of her pop surrealistic paintings: one depicting Michael Jackson, a large pink bubblegum bubble obscuring the bottom half of his face, lounging with an inflatable dolphin, and the other a giant portrait of Mike, the man who was sitting across from me. The cartoon-candy colors in Terri’s artwork were more vibrant than ever against the black-painted walls. I looked around, from the quirky-yet-hip furniture (blue and green vinyl banquette, a mid-century blue velvet couch), to the saltwater fish tank that glowed bright and blue.

All the while, I struggled to prevent my face from looking smug. I did this, I thought, as I nodded along to whatever story David was relaying to our friends. I silently chided myself for taking all the credit; it was possible that Terri and Mike might have met some other way — San Diego is a small town, especially for creative types. But I’m the one who gave the nudge, I argued inwardly. The rest of me accepted this point and conceded, thus allowing all of me to feel proud, minus the guilt.

I should give some of the credit to Mike. If he hadn’t posted that comment on that photo of Terri I’d shared, I probably wouldn’t have pushed. I’d tried to hook them up a year before that comment, but Terri was too distracted by other suitors to give my suggestion much thought. But now she was completely unattached.

That morning, Terri and I had filmed the hosting portion for an episode of Art Pulse TV,a television show we worked on together. We were winding down with a glass of sparkling rosé at Urban Solace, waiting for David to wrap the shoot and join us for lunch when I posted the photo of Terri with the caption, “Terri — Art.”

The comment appeared almost immediately. “I don’t know this Terri fellow, but she seems sort of wonderful.” Terri, who was seated beside me, received the notification at the same time I did, and then she uttered two words that may as well have been a symphony for all the meaning they contained: “Who’s Mike?”

I don’t know much about basketball, but I knew getting these two together would be a slam dunk. Terri was interested in improv comedy and Mike ran his own improv theater,Sidestage Improv. They were both funny, but in different ways, so in that regard they would be compatible rather than competitive. They were both artists with different mediums (Mike expressed himself through photography and poetry, Terri through painting and graphic design). On the shallower end of the spectrum, they both fit squarely into the societal standards for beauty — tall and handsome. But, most importantly, these two individuals both suddenly had me all up in their shit.

“I’m going to find out if he’s single,” I said. Terri made a pained noise that sounded like “Okay” but was delivered more like a question than a statement. It was all the permission I needed, so I began texting. “Mike, are you single?”

The response was immediate. “Like a fox. A single, single fox.”

“I was wondering,” I responded, “Because so is Terri, and I think you guys need to know each other.”

“I’m all for it,” Mike answered. “She is obviously awesome because she’s your good friend.” Now he was clearly buttering me up, but I took it. That’s the upside of meddling with a positive outcome — all the positive attention. The meddling itself had more to do with control.

Terri had long before established my alter ego as the Scheming Raccoon, named for the meme. We have a running joke wherein she claims that I am, at any given time, somehow manipulating someone. I might compliment her and she’ll say, “Are you manipulating me?” I’ll say, “No, of course not.” And she’ll look distressed and say, “Are you just saying that to manipulate me?” A question I playfully dodge.

But, as with most things that are funny, there is some truth to her claim. That’s why I tried harder than necessary to arrange a group hang, so I could be present during Mike and Terri’s first meeting. But Mike was cleverer by far. After I suggested a party, he wrote, “What do you think about a good old-fashioned semi-blind date?” I could feel the control slipping from my fingers. He made his “man-of-action” intentions known with his next message, “You have the weekend to think of a better plan than, ‘send her a Facebook message that says, You seem fun and interesting, would you like to get together to get a drink and make laughs?’” Damn he was good. They didn’t need me, and yet, there I was.

“No need to FB message,” I wrote. Terri was still seated right beside me and had been privy to the back-and-forth. “Here’s Terri’s number, given to you with permission from the lady herself. She’s a texter.”

The next day, Mike messaged, “We texted a bit last night. She seems hideous. Thanks for nothing.”

I responded, “If this goes further than texting, you have to name your first kid after me.”

“Are you guys conspiring with each other to text me right now?” I assumed they were messing with me (“the thief doth fear each bush an officer”). But Terri didn’t know what I was talking about. She wrote, “No, he’s peeing.”

Now, over a year later, Terri and Mike were having David and me over to check out their new home. Their space is the perfect mash-up of everything that is special and interesting about each of them. When I say I couldn’t be happier for Terri and Mike, what I’m thinking is,Scheming Raccoon for the win.