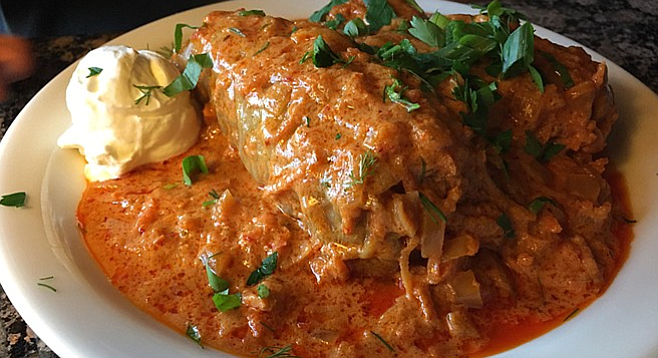 Tucked into a row of nondescript storefronts along the industrial main drag of El Cajon Boulevard is a Georgian-cuisine gem called Pomegranate, but you wouldn’t know that from standing outside. The sign outside simply reads, “Restaurant,” and the awning below adds, “Tasty Eastern European Food.”

Here and there you’ll find images of pomegranates, solid red circles that are worked into the number of the address and painted beneath the word “Restaurant” on the side of a planter. Crossing the threshold, however, is like stepping into the dining hall in an estate belonging to a Russian matriarch. I imagine her as a take-no-shit granny who, despite her age and well-to-do stature, still insists on cooking every meal for her ever-growing family.

I’ve never been to Russia, which is known to feature many restaurants from its southwestern-most region-turned-country of Georgia, which now borders Russia, Turkey, Armenia, and Azerbaijan; its entire west coast abuts the Black Sea.

As the nexus between Europe and Asia, Georgia is known for its unique fusions featuring flavors that have been adopted from world-traveling merchants over the centuries. Take the pelmeni, for instance. This dish comprises “Siberian meat” dumplings that are garnished with a Persian-inspired yogurt-dill sauce. Pomegranate’s version ($9) is both comforting and exotic.

My husband is Hungarian and salivates over most any Eastern European dishes. His eyes lit up when he saw stuffed cabbage rolls on the menu (golubtsi, $15.50). Though they didn’t taste anything like his mother’s Hungarian version — the sour cream-based sauce here was on the sweet side — David approved of the these cabbage rolls, which were filled with ground meat and herbs.

One of my favorite bites came in the form of a special that sounded boring at first but turned out to be as tasty as the dumplings. It was Russian styled meatloaf, referred to here as cutlets, but what arrived were two giant, sort of flattened meatballs covered with a drizzle of a delectable sour-cream-based sauce (its pink hue likely from red beets) and served on a plate with sauerkraut and creamy mashed potatoes. I hope they add this one to the menu soon, because I want to order it again.

The graffiti-covered walls reminded me of DaoFu, another small and exceptional restaurant that serves up Asian fusion. Something about customers’ scribbles on the wall conveys a welcoming feel and immediately connects me to all the other patrons who sat and dined in the same seat in which I am now dining. It is as though the “mothers” of these joints — not the “plastic-on-the-couch” type but the relaxed, “don’t-cry-over-spilled-milk” sort — are saying, “Come, my children,chama! Sit and eat.”