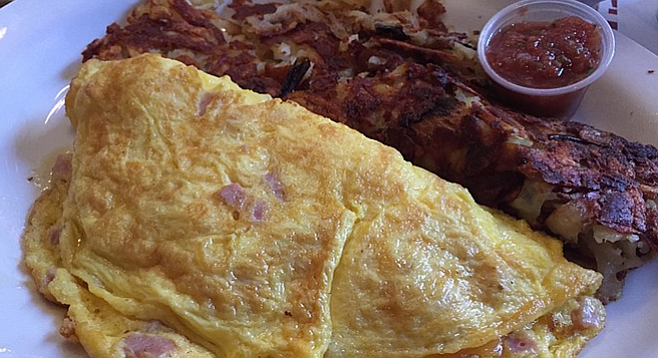 I was only going for a friend. It was her birthday, and this is where she wanted to brunch. So I was fine with it, even if the place was adjacent to the notoriously kitchy Albie’s Beef Inn.

My one meal at Albie’s, many years ago, had been subpar, and I’d just learned our brunch spot, Adam’s Steak ’N Eggs, was owned by the same people, so I was trepidatious. But my fears were soon cast aside. David often invokes his pleasure equation: P = Q over E, or Pleasure = Quality over Expectation. Because my expectations were so low, and the quality of food and service was high, my pleasure was immense. The Eye Openers section of the menu was fun, and the list contained a bunch of throwbacks I haven’t seen anywhere else, such as the Milk Punch and Ramos Fizz. I ended up with a mimosa, but because my friends are sharers, I got to sample a few of their blended libations, all of which I enjoyed.

We ordered two Corn Fritters ($7.50) as a side, expecting them to be like hushpuppies. Instead we received two corn-biscuit-like pancakes served with butter and syrup. They were delicious.

I ordered the all-American favorite Ham & Cheese Omelete ($11.50) with “ranch-style potatoes” that turned out to be exceptional hash browns, all dark and crispy on the outside but smooth and creamy inside.

The aspect that pleased me most about the meal was the absolute lack of grease on my plate. Ham, cheese, eggs, hash browns: a classic entrée that is so frequently ruined at some diners by an excess of grease. Sometimes I can save it by using a napkin to sop it up, but other times — sad times — I’m left to pick around it.

Here the eggs were not overcooked or drowning in butter, the hot and gooey cheese was reminiscent of my childhood (I went really old school and all-American by asking for straight-up yellow slices), and the bite-sized ham bits were tender and juicy. The whole dish was perfect.

David didn’t fare as well, as he was disappointed by the grits that came with his Steak ’N Eggs ($14.50), the dish for which the restaurant is named. Despite the inherently gritty nature of “grits,” David was hoping for the rich and creamy Southern-style version. These were more like cream of wheat, with a more watery and granular texture.

The combination of fresh and tasty food, casual family atmosphere, friendly service, and reasonable prices — added to the fact that, though bustling, we were able to be seated quickly — has bumped Adam’s Steak ’N Eggs to the top tier of my go-to easy, casual brunch spots. And now I’m curious to revisit the menu next door.