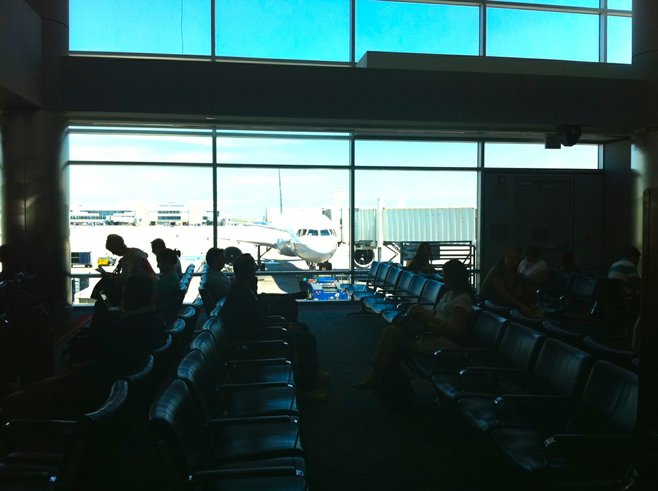 When things go so wrong, when the chasm between expectation and reality reaches such ludicrous depths, the only sane thing left to do is laugh. Hysterically.

This is especially easy to do when you realize that all the interrupted plans, all the mishaps, all the things that can get messed up in a day, no matter how irritating or inconveniencing, no matter how frustrating or maddening, are not likely to kill you, so it’s ridiculous to let your body get worked up to the same level of stress that would come with, say, being mauled by a savage beast.

So what if our buyer backed out just before close of escrow and the night before we had to leave town – at least we were going to fly first class from San Diego to Boston. David and I had traded in a bunch of miles we’d accumulated over the years to ensure the upgrade; after all the stress of the previous months (and that was before the last-minute buyer-back-out bomb was dropped), we wanted to be able to relax on our way to a working vacation that included visiting some friends, David’s gallery exhibition, and staying with David’s parents.

We were running great on time, and my dad got us to the airport with plenty to spare. Once through security, and seated on a plane taxiing to the runway, I smiled at David and said, “Here we go! This is going to be an awesome, relaxing day.” As if on cue, the pilot stopped the plane and made an announcement: construction on the runways at Denver International Airport meant fewer aircraft could take off and land, so we would have to sit for 45 minutes or so on the tarmac before taking off. Our connection was scheduled to take off 45 minutes after our original scheduled landing time. The flight attendant reassured us that if we missed our connection, the airline would automatically rebook us on the next available flight.

Fast forward a few hours: We landed at 10 minutes and 20 gates to our connection. “You go ahead of me,” I said to David, “I’ll catch up. Just tell them to hold it.” I figured, given my recent hobby of jogging, that a 20-gate trot would be nothing. But running that length, in heels, bogged down by a stupidly heavy carry-on and purse, in the thin altitude of the mile-high city, was nothing like my morning jaunts around sea-level Balboa Park. When I got to the gate, I could barely breathe. David was there, as was another guy who’d been in first class with us. “They just closed the door,” David said. We watched the plane on the runway, simply sitting there, as though to mock us.

We’d already been booked on the next available flight – for five hours later, but we were eager to try and keep those first class seats, and to see if there were any earlier flights. We waited in a customer service line for nearly an hour. Once we got to the front of the line, we were told that unfortunately, the planes were completely booked. No first class. To the customer service rep’s credit, she worked very hard and made several phone calls and clicks on her computer to refund us a portion of the miles we’d traded for the upgrade we just lost on the long leg (it’s about four hours from Denver to Boston).

We parked ourselves at an airport bar, where my mojito tasted like lemon-water and my Philly steak sandwich smelled like sink sponge. After a few hours, we were notified that our rescheduled flight was going to be delayed. For two hours.

When we were finally seated, in a row of three, next to the same guy who’d been on our previous plane and who’d watched as the door closed on the ramp to the plane we all missed, I let out a long breath. “So, instead of arriving at 6 p.m., we’re going to arrive at 2 a.m.,” I said. David rubbed his hands all over his face, perhaps in an attempt to scrub away the fatigue of what turned out to be a 17-hour trek to our destination. “But hey, then we’ll be there, and we can just relax, and—what the…”

David let his hands drop from his face and looked over at me. “The wire in my bra just popped out, now it’s poking me in the armpit,” I said. I let out a cackling sound, half laugh, half animalistic howl. “Okay, I give up. This day has just officially become terribly absurd. But you know what? For some reason, I don’t mind so much. I’m just happy to be on my way to what I hope will be a bit of a break for both of us. That is, if we ever get there intact.”