Sailing on the Bay 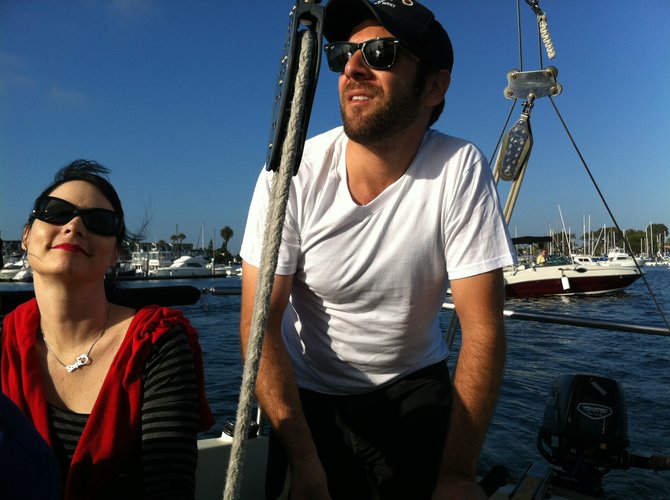 “What the hell is he talking about? Are we all supposed to strip?” I asked Lou, who was manning the tiller. Unlike everyone else in the 20-something footer, I was facing the back of the boat.

“Let go of the rope,” Lou said. I looked down at the rope in my hands, the one I’d been tugging because I thought it was going to fly toward the front of the boat. I dropped it on the seating ledge beside me. “Now wrap it around, twice, and I’ll let you know when you have to pull it.”

Apparently, the rope I’d been holding onto was for the jib, the sail at the front. I thought I’d selected a “no-work” spot to sit. After all, this was a boat race, my aircraft carrier Navy brat background had not prepared me to deal with ropes and jibs and whatever else the two sailors on board (Bob and Lou) were carrying on about. Only one of the four ladies – Bob’s wife, Sharon – seemed to care if we actually won the race we were in. The rest of us – Steph, Carole, and me – were simply enjoying an afternoon on the water in Mission Bay. Carole and I would have been happy if we just sailed to where all the seals were kicking it on a dock and dropped anchor.

I’m not sure how many other boats were in the race – 6? 10? – because we all took to the water at different times, to practice and line up. Once things got started, it seemed more like bumper boats than boat race — I suffered at least three Holy shit they’re going to hit us panic attacks in the first ten minutes.

Before we left the bay, tragedy struck – Steph broke a nail. Shortly after, we encountered one of the boats in the race, which had somehow gotten stuck at the end of a jetty. Bob called out to them, asking if they needed help, but I pointed out the rescue boat that was making its way toward us. “Hey, maybe we can intercept the rescue guys and see if they have a nail file,” I said, only half-joking. It’s not like that boat was going anywhere, what was an extra few minutes to help a girl in need?

By the end of our hour-long tour of the bay, I actually had the rope-thing down. I asked the guys to stay consistent; as long as they used the same words to refer to the same orders, I was good. There are way too many synonyms in nautical terms.

We came in second to last, a place that seemed to disappoint Bob, Lou, and Sharon. But Steph, Carole, and I were smiling and relaxed from the beauty of the bay, the calling of the seals, and the setting sun reflected on the water.