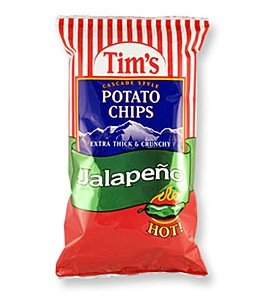 David gets a kick out of drawing similarities between me and my sister Jane. We both do the “happy dance” when we receive tasty food, we’re both exceptionally neurotic, and we both make a game out of pushing his buttons. But today, he discovered something new, something he describes as “not normal,” but something Jane and I argue is VERY normal. I’m bringing the matter to you, my readers, to help settle the argument. It’s all about ratios, now hear me out.

After our morning jog-walk, which is more like a panting walk and stumble forward, we came back to my place, took turns showering and complaining about the lack of hot water (apparently one of the boilers busted this morning), and prepared our ritual turkey sandwiches in the kitchen: thinly sliced Boars Head pastrami flavored turkey, lettuce, veggie pepperjack cheese, honey mustard, and avocado on wheat. The accessory to our sandwich, the thing that adds crunch, spice, and excitement to our lunch, is Tim’s jalapeno flavored potato chips.

As always, Jane and I each dropped a specifically-sized handful of those chips on our respective plates. When David reached over and took a chip from Jane’s plate, she immediately grabbed for the bag to replace her lost chip. “You almost messed up my ratio,” Jane said.

David learned long ago not to mess with my ratio. Take all the chips you want from my plate, just do it at the beginning of the meal, when I can still compensate and adjust so that my last bite has the right balance.

“Both of you? Okay, now that’s not normal,” David said.

“Yes it is,” Jane and I argued in sync. I continued, “Don’t you want the right amount of sauce for your pasta? The right balance of salt and sugar in a cake? With sandwiches, it’s crunch to soft. Caring about ratios is NORMAL. End of story.” David still disagrees. So I’m reaching out to my peeps online. What do you guys think?