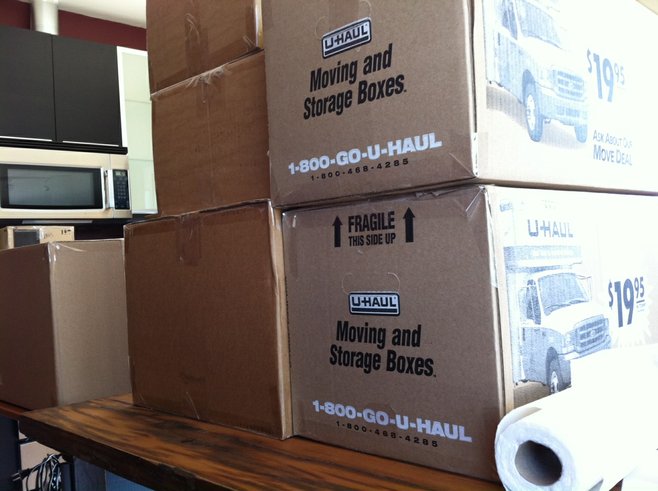 My view for a while.

The deed is done. Last night David and I slept in our new home for the first time. We have moved the bulk of our things from the Egyptian (the name of our old condo building) to Pandorica (the nickname we’ve given our new apartment).

I didn’t sleep much our last night in the Egyptian. I kept thinking, This is it. This is the last time I’ll fall asleep to that ceiling, the last time I’ll wake up and brush my teeth in that sink. This morning, I had all of the same thoughts, with one significant word change. As my father often says, things only have the meaning you give them. Sentimentality for what was is not as productive as appreciating what is and preparing for what could be.

I slept like a rock our first night in Pandorica. I’m pretty sure that had to do with the exhaustion of a long moving-day and the sedative effects of the Valium I took in order to stop stressing about all of the things that have to be done next, mostly involving unpacking and organizing. In a space half the size as our last one.

Last night, after eight hours of moving, David and I stopped by IKEA to pick up a couple of bookshelves and cubbies for what will be our TV room/my office. Just more stuff for him to assemble – right now he’s working on putting together the bed-frame, and then he’ll be onto the closet and linen shelves we brought from our old place. Stress has made our tempers short and our irritability high. So before heading to our new home, we stopped by the Tractor Room for a cocktail, some food, and a chance to sit far away from our tasks and take some slow, deep breaths.

We mentioned to our server that we’d spent the day moving. “You know what’s odd?” she said. “That even if you were to move just across the street, suddenly the act of moving makes you feel like you need all this stuff and you have to go shopping.”

I blushed, and not from the cocktail. “We just came from IKEA,” I confessed. “Crazy thing is, we’re moving into a smaller space, and you’re totally right – we have all these errands that include shopping for stuff we need in order to live at this new place. And we’re in the same damn zip code!” She laughed and walked away, but I was left perplexed.

“Why do you think that is?” I asked David. Then, as usual, I answered my own question before my man had a chance to get a word out. “It’s not that we need new stuff, it’s that we need different stuff. If we were moving into a mirror-image of our old place, we wouldn’t have to get one of those suction-cup shelve-y things for the shower, because we had the tub ledge to set stuff on. And we only need all those shelves in my office because we sold the old bulky bookcase and my desk.”

David smiled. “You’re doing it,” he said. I raised a brow at him, pretending I didn’t understand what he meant. “You’re rationalizing.”

“Well how can we unpack if I don’t have any place to put things?”

“Still doing it,” David said. “How ‘bout you take a sip of that drink, and we’ll worry about the rest later.” David smiled and held up a glass for a toast. I did the same. “To our new home,” he said.

“To our new home.” I took a sip of my blueberry-bourbon drink, and tried not to think about the chest-high stacks of boxes that awaited us at home.