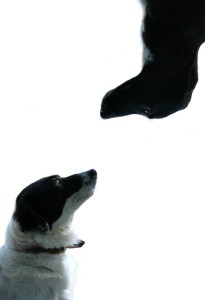 David and I rarely argue. Bicker, sure, everyone bickers — a cranky huff, a misunderstanding that leads to irritation, we are human after all. But argue? As in fundamentally disagree and dig our respective heels into opposite stances? We’d always prioritized getting along over winning. But one issue has been working its way into our dinner conversations with ever-increasing frequency, resulting discontent: I’m ready to get a dog, and David is not.

I’ve always enjoyed looking at other people’s pets. “Isn’t it cute,” I’d say, keeping my hands to myself – “I’m allergic” was my excuse, though it wasn’t that. Allergy shots and time have cleared up most of my issues. It was more about the mess: hairs falling loose from a coat of fur, the potential for filth that might get on my clothes or worse, on my skin. I would look, but not touch. In the last few months, however, something changed.

A pet was never an option when we lived in a corner penthouse – whenever it came time for Fido to empty his bladder, it’d be a long elevator ride and a giant lobby to the nearest bush. Just imagining the hassle was enough to quell my kindling desire to adopt.

But then we moved. Now we’re in an apartment with easy access to the outside, and most of our surrounding neighbors have dogs. Big dogs. Golden Retrievers, a Chocolate Lab, a Rottweiler. In our new place, the dogs all seemed touchable. Lacy (my personal favorite) is a 2-year-old Retriever/Dalmatian mix, a beautiful golden package of uncontainable happy energy. The first time she jumped up at me, she tripped a critical switch in my machinery. I dropped to my knees and patted her, from soft ears to violently wagging tail; I never wanted to stop.

I’d always thought that whole ‘biological clock’ thing was a myth. But clearly, mine had gone off. This fierce urge to nurture was foreign and uncontrollable. During our excursion to the Chilifest in South Park (where it seemed every other person had a leash in hand), my friend Carole pointed out that I had stopped to pet every dog we’d passed. “You need to get a dog, Barb. You’re looking at these dogs the way women who really want to have a baby look at babies,” she said. After a horrified silence, I slowly nodded and acknowledged her observation.

I’d been steadily bringing up the subject of getting a pet with David over the past few years. After humoring me and talking about the kind of dog he’d like “someday,” David would tire of it and resort to his failsafe tactic to quash the subject: “Are you willing to clean up its shit?” I surprised myself as much as him when, a few weeks ago, I answered, “Yes. For some reason, the idea doesn’t bother me the way it used to.” I noted the flicker of alarm in David’s eyes, and started talking about something else.

“You told me, when we got together that you wanted a dog someday.” We were seated at the dining table, with Trader Joe’s stuffed peppers, Steamfresh broccoli, and a bottle of something red. David sighed and gave me a look that indicated I was ruining his appetite. “You didn’t want cats, I was fine with that — I got rid of my cats. You didn’t want kids, and that was cool, because neither did I. But when I asked if you wanted a dog, you said yes, that you would someday. It’s been nine years. Some day’s getting closer for me, and I want you to start thinking about it.”

“It’s not a card, it’s a fact,” I said. “And it was a decision I made, based on information you gave me, and I’m starting to think that you weren’t being entirely honest.”

“We have all the time in the world to get a dog. Remember? We talked about getting one when we have a place with a yard.”

“Yeah, but that’s just it,” I countered. “Look at us. We went from a contemporary condo to a contemporary apartment. We didn’t like any of the houses we looked at; we’re not house people! It’s only recently occurred to me that we might never have a yard, so you can’t say you want a dog ‘when we get a yard,’ because that just means you never really want one.” I was getting angry. A look at David’s flushed face told me I wasn’t alone.

“There’s no room! We can’t even invite people over to watch a movie with us because our office-slash-TV room only seats two people. Where are we going to keep a dog here?”

“By my feet,” I said. “Every one else in this complex manages to do it, and their dogs seem just fine – they even all play together! We’ve got our own built-in dog park here.”

“Don’t do this,” David said. “I know how you get an idea in your head, and it becomes something solid that won’t go away until you get what you want. Don’t act like the decision’s already made, there are two people living here.”

“That’s what pisses me off,” I said. “There are two of us, so why do you get to have the final say? Especially when you told me all along that you wanted one! This isn’t unexpected. I don’t want to wait forever, for this magical futuristic day when we have a yard.”

“This isn’t about me imposing my ideas on you. I am not trying to change anything. It’s you that wants to change the status quo, and that requires unanimous consent. I agree — dogs are lovable, and we’re fortunate that where we live, we can be ‘aunt and uncle’ to so many great dogs. But the reality of owning a dog is that they shed, they destroy furniture, and you have to walk them at six o’clock in the morning, even if it’s raining, and you have to pick up their poop. Somehow, I don’t think you’re suddenly going to start cleaning our floors and windows.”

“But you love dogs,” I said, quietly. “You bought biscuits for Lacy. You get on your stomach on the ground and let her lick your face.” The anger had faded from my voice. I felt despondent. “You’re always going to want to keep your things nice. That means you’re never going to want a dog. And that… that makes me sad.”

A subtle change occurred in David’s expression. It took me a moment to translate it – before, he’d been angry at me for pushing too hard; now he was he was angry at me for making him feel bad. I heard a bark – deep, throaty; surely Kayla’s, the plump Golden Retriever with the rust-colored coat and bad knees – and I instinctively looked toward the window. “Fine. I get it,” I said. “You don’t want a dog. I’m not going to force you.”

“Good,” David said. His voice had a hard edge to it, but his eyes had softened.