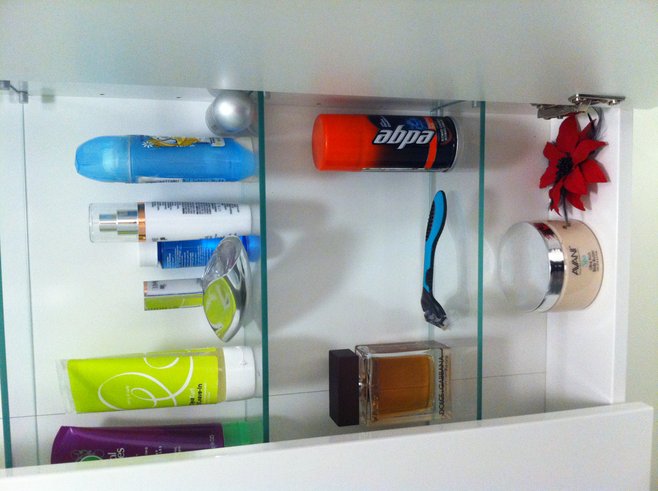 Peek inside the new cabinet.

It’s been one week and two days since David and I officially moved. I use the word “officially,” because there are still some odds and ends that need transporting. I haven’t been back to the old place; David has been collecting the leftovers – pots and pans, small items from a medicine cabinet, a drawer full of papers.

One of my biggest concerns before moving, something that had me suffocating beneath a barrage of dreadful “what ifs,” was the idea of sharing a bathroom.

While sitting on the stools we placed at our dining table (because we’ve yet to get chairs), eating our Lean Cuisines and sharing a bottle of Carménère, I mentioned how fortunate it had been that we were traveling right before we moved. “Helped us get used to living out of a suitcase,” I said. “Ha! We had to go to Martha’s Vineyard to practice how to share a bathroom. Talk about your First-World Problems.”

David smiled. Not at my joke, but at seeing that I was adjusting so well to our new home. He’d been prepping me for weeks, talking me down in advance, saying things like, “There will be stacks of boxes that make the rooms look smaller, but don’t worry, it just looks that way.” I think he was expecting some kind of major freak-out on my part. I kept reminding him that freak-outs were at an all-time low — better-living-through-chemicals and all that.

In our old place, David and I not only had two bathrooms, but we also had two sinks, side by side, with a long length of counter between them on which I could set all kinds of shit – hair ties, comb, perfume, mousse – so much that he’d get on me constantly about the clutter. No surfaces means no stuff piled on top of them. “It’s great to have to put things away,” I said. “I need to be forced, otherwise, I’ll just leave stuff around.” David agreed, a little too emphatically.

“I don’t know why I was so worried.” I took a sip of wine from the clay tumblers we brought back from Trevi, Italy. We haven’t unpacked the wine glasses yet. “You’re always showered and dressed by the time I wake up. I sort of feel stupid for ever having been concerned about it.”

Ever since I saw that rap video about first world problems, every little thing I complain about seems ridiculous. The other morning, David overheard me cursing in the shower and rushed in to see what was wrong. “I mistook my conditioner for my shampoo,” I said. “Now I have to shampoo out the conditioner and then condition again.” David, sufficiently stupefied, half-nodded and retreated.