Will you map the distance from Mia and Kerry’s place to the theater?” I called to David from the bathroom, where I was busy patting my head with wet hands to de-frizz my hair.

“Why?,” David asked apprehensively. When I didn’t answer, he warned, “It’s not your party. You can’t tell people when they need to leave. They’re grown-ups; they know what time the movie starts.”

“But there are gonna be, like, 30 people! I can only save so many seats.” I threw my hands up at my reflection. “You know what? It’s fine. We don’t have to sit next to everyone. People will get there when they get there, and I’m not going to worry about it.” David’s face appeared in the mirror with a wry, Yeah, right look on it. I sighed and turned to face him. “Okay, how ‘bout I just announce when I’m going to leave and just kindly suggest to everyone that if they want a good seat, they should consider following me?” David squinted his eyes as if to gauge my sincerity, decided he didn’t care, and left me to finish de-frizzing.

I was excited to be part of the evening’s festivities — celebrating our friend Kerry’s latest success by going to see the movie she cowrote on its opening weekend — but my time issues combined with my movie-theater anxieties had left my guts in knots.

The last time I went to see a movie on opening weekend, I showed up to the theater two hours early and there was already a line. (Okay, so there were only five people ahead of me, but I spent the next two hours worrying that they would take the only seat I wanted — they didn’t, but still…). After that, I vowed to wait a few weeks before seeing any new flick.

I’d waited several weeks before going to see The Avengers, but once I’d settled in my favorite seat, it became clear that dealing with the opening-weekend crowd was not the root of my crazy tree. The crowd didn’t matter so much as the people comprising it. Sure, I was first in line, but that didn’t stop some dude from sitting in the seat next to me, putting his cup in the armrest we shared, and allowing its cold condensation to drip onto my leg. People talked during the film, their glowing phones wiggled in my line of vision as they texted, adults let their kids run loudly up and down the steps, and many made gross smacking noises as they munched on noxious-smelling food — people were awful.

But this was Kerry’s night, and I couldn’t allow my acute misanthropy to dictate my mood. I was determined to be easygoing, for the greater good. When we arrived to the party, I was immediately distracted by the fanfare, courtesy of Mia, who I affectionately refer to as Kerry’s David (in that she, too, is a fine-art photographer and calming presence for her partner, a spastic writer-type). The place was decked out in a black-and-blue theme — balloons, gift bags with black-and-cobalt-colored tissue paper, a giant movie poster, and the director’s chair with Kerry’s name on it (which I’d seen before, as Kerry had been given the chair when she visited the set during filming). 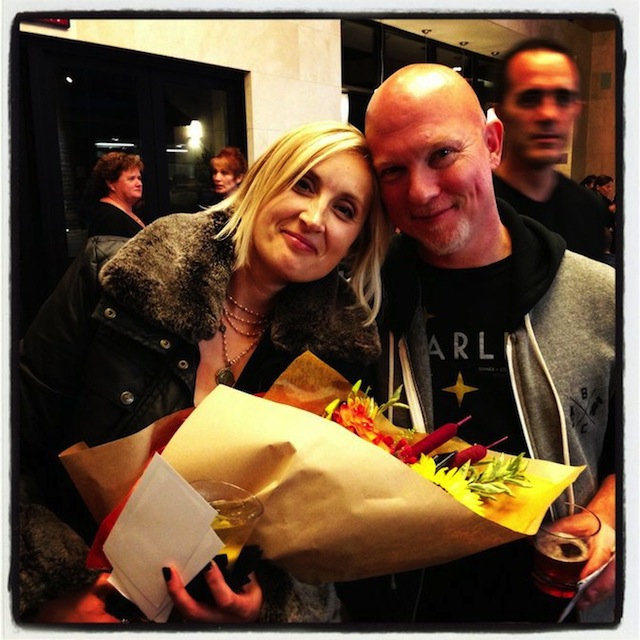 Kerry and David at the theater

We listened as Kerry and Mia told us about the surreal experience of being beset upon by hordes of paparazzi on the red carpet. We drank wine, chatted with friends, and enjoyed the fare, which had been prepared by friends and ex-restaurateurs. After a heartfelt toast to her love — glasses filled with rosé champagne, all clinking for Kerry — Mia presented us with the gift bags, each containing a book (signed by author James Patterson), a screenplay (signed by Kerry), and a card from Kerry, which also contained our tickets to the movie. “I feel like we should be the ones giving the gifts, not the other way around,” I said. And though everyone agreed, nobody offered to give back the keepsakes.

“Wait,” I said after glancing at my ticket. “We have seat assignments?”

Mia nodded. “Yeah, there are only 60-something seats in the theater. I think we take up over half of them.”

I suddenly found it easier to breathe. “Even so,” I said, “I’m probably going to go a little early. You know, to make sure I find parking and have enough time to pee before it starts.”

“Actually, I want to get there a little early to make sure everything’s in order, so I’ll ride with you guys,” Mia said. I could not have been more delighted. Finally, my neurosis seemed to have a positive application.

On the drive there, Mia explained the layout of this particular theater, a luxury cinema called Cinepolis. “Cinepolis…like the VIP cinema we went to that one time in TJ?” I asked. David nodded. “With the leather reclining chairs and the fancy food and cocktail service to your seat? We have that here? How did I miss this?”

“Probably because it’s in Del Mar, which is half an hour away from us,” David offered.

I hadn’t been to the Cinepolis south of the border in over five years and had only a vague memory of sipping a piña colada while leaning back with my feet up to watch a Spider-Man movie in English with Spanish subtitles. The theater I entered in Del Mar was much smaller, which gave it a more intimate, exclusive feel, amplified by the fact that most of the people in it were with our party.

I pressed a button to recline my giant leather chair and reached my hand across the only shared armrest to hold David’s arm. My jalapeño-infused cocktail nearly disappeared in the insulated, no-drip cup holder to my left. It was only as I sipped my drink and the previews began to roll that I heard someone mention we were in a 21-and-up theater. I couldn’t remember the last time I’d been to the movies without having to suffer restless kids.